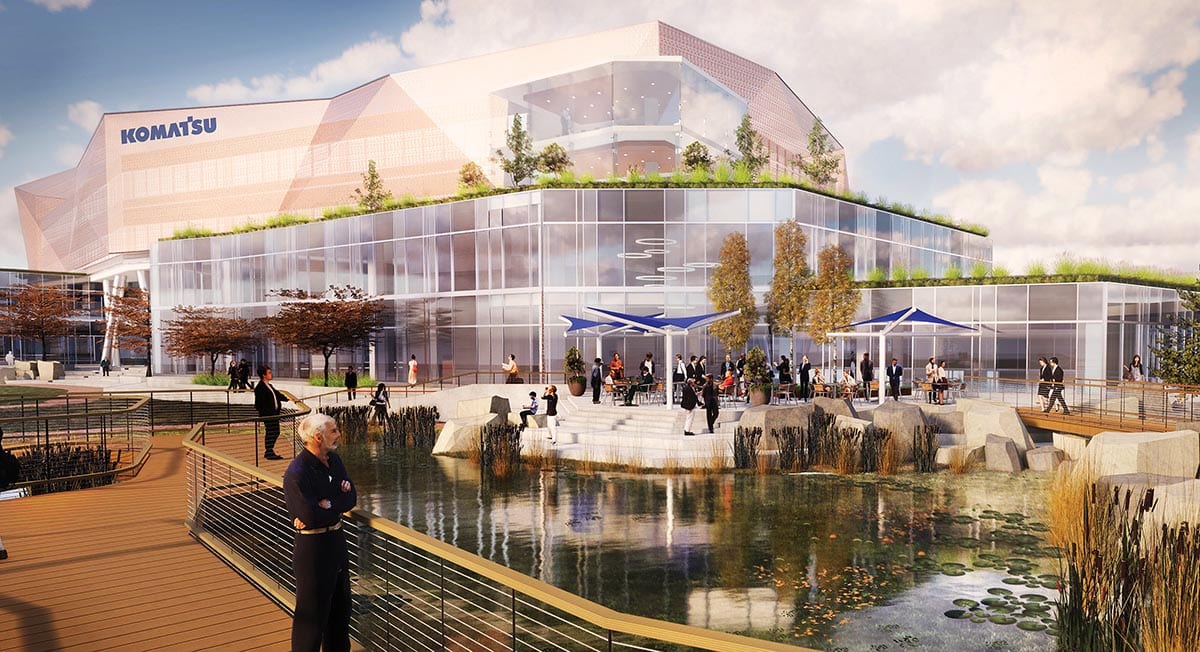 Komatsu Mining Corp. plans to build a $285 million corporate headquarters and manufacturing and training facilities, the No. 2 ranked project of 2018.

If there was any question that the manufacturing sector is continuing to grow in Wisconsin, look no further than WEDC’s annual ranking of the top economic development projects of 2018—manufacturing projects took 21 of the top 25 spots on the list.

The biggest project of the year was Green Bay Packaging Inc.’s new $500 million expansion that will include a state-of-the-art paper mill to replace the company’s existing 71-year-old mill that has been rebuilt three times. The new mill, one of the first to be built in the state in decades, will allow the company to increase its capacity by 50 percent, cut greenhouse gas emissions and eliminate wastewater discharges into the Fox River.

One of the largest economic development projects in the state, and the largest ever in Brown County, the expansion is expected to create 200 new jobs and retain more than 1,400 jobs. WEDC is supporting this project by authorizing up to $60 million in state income tax credits.

“This project will provide an economic boost to Green Bay, the region and the entire state,” said Mark R. Hogan, secretary and CEO of WEDC. “WEDC is proud to support this company’s investment in Wisconsin and the many family-supporting jobs it will bring with it.”

The top 25 list is based on all corporate expansion and attraction projects in which contracts between WEDC and the company were executed in 2018. The projects are ranked based on the estimated capital investment planned for each one—including construction, equipment and land acquisition. The job projections and estimated capital investment are based on the requirements set forth in each contract. Corporate expansion and attraction projects not receiving support from WEDC were not included in this list.

Taking the second spot in the list of 2018 top project is the Komatsu Mining Corp.’s $285 million plan to build a new state-of-the-art headquarters and manufacturing campus in Milwaukee—a project with the potential to create more than 400 jobs.

Komatsu intends to build a new corporate headquarters and manufacturing and training facilities at the former Solvay Coke site along the Milwaukee riverfront. The 54-acre site, to be called the South Harbor Campus, is near the location of the company’s original machine shop off South First Street.

Plans call for the new campus to include about 170,000 square feet of office space, a 20,000-square-foot museum and training building, and 410,000 square feet of manufacturing space, consolidating two of Komatsu’s current Milwaukee-area facilities into a central location. The project is expected to be completed in 2020.

The third-largest economic development project of the year is Kimberly-Clark’s proposed $200 million expansion of its Cold Spring facility in Fox Crossing. This was a key initiative because it secured a commitment from the company to not only expand the Cold Spring facility but to also retain all 388 workers at the facility, as well as more than 2,400 employees working at Kimberly-Clark facilities throughout the state. WEDC will provide up to $28 million in tax incentives in order to ensure the company’s commitment to the state.

The project, supported by $1.75 million in state tax credits, will include the 270,000-square foot research and development facility, which will provide the proper infrastructure for Promega to respond to emerging opportunities in the global biotechnology and life science markets. Currently, R&D operations are spread across three buildings at the Fitchburg campus. This new three-story building will allow the company to consolidate these employees into a single facility.

Rounding out the top five on the list is Allegheny Technologies Incorporated’s (ATI’s) $95 million expansion of its plant in Cudahy, a project expected to create 125 jobs as it helps the company meet the growing demand from the aerospace jet engine market. ATI, which purchased the former Ladish Co. in 2011, is a global manufacturer of technically advanced specialty materials and complex components. WEDC is supporting the project by awarding up to $7 million in state income tax credits.

“Manufacturing has a strong legacy in Wisconsin, and WEDC is proud to support these companies as they continue to commit to growing in Wisconsin,” Hogan said. “At the same time, these top 25 projects represent a portion of the work done by our dedicated staff as we continue to maximize opportunities for companies, communities and citizens to thrive in a globally competitive market.

“In 2018, WEDC made over 300 awards totaling more than $341 million to businesses, nonprofit organizations and communities to help grow the economy in every region of the state,” Hogan added.

Meanwhile work is moving forward on the 2017 top project of the year: the Foxconn Technology Group’s $10 billion advanced manufacturing campus in Racine County. Construction of the first building on the site has just been completed and an occupancy permit will be issued soon. Once completed, the Wisconn Valley Science and Technology Research Park is expected to create up to 13,000 new jobs.