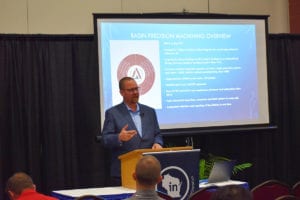 Erik Anderson has a bone to pick with Merriam-Webster, insofar as dictionary definitions contribute to a common misinterpretation that “automation” involves replacing humans with machines. The subtitle of his breakout session at the 2019 Wisconsin Manufacturing and Technology show in West Allis pointedly dispelled the fear-inducing suggestion that we’re all disposable: “The Robots Are Not Coming for Our Jobs.”

As chief commercial officer for Basin Industries LLC employing 150 employees in two Wisconsin machine shop locations—Jefferson and Whitewater—Anderson speaks from experience when providing advice to his fellow manufacturers on automation. Basin recently invested $10 million in new automated equipment and $3 million in tooling and infrastructure in the company’s Jefferson facility.

“If you listen to the news, there used to be a lot of talk about creating jobs,” Anderson said. “That led manufacturers to wonder, ‘Who’s going to do them?’” Today, there is a growing understanding of the potential of automation to address an increasingly dire labor shortage nationwide, particularly in manufacturing.

“Automation empowers the staff you have to output more,” Anderson explained. Proving the point, he revealed an increase in revenue at Basin from $22 million in 2016 to $43 million in 2018, a boost he attributes largely to the company’s automation initiatives. “And we added six people in the process,” he said.

When he was promoted to lead Basin Precision Machining LLC’s operations in 2015, Anderson was charged with doubling the size of the company in three years. With that direction, we went straight to the shop’s floor to engage his employees.

“Your people are your most valuable asset. They want to do the job right,” Anderson said. But they also need to feel valued. Through dialogue, Basin’s employees feel they have a say in the company’s development.

Such dialogue at Basin includes reassuring employees that “we’re not coming for your jobs,” said Anderson. “We wanted to convince our people that automation is cool.”

Anderson stressed that automation does not only apply to “making things.” At Basin, they’ve automated everything from onboarding new employees to continuous improvement systems which invite staff to submit suggestions on topics ranging from safety and ergonomics to efficiency and quality. Anderson reported that the system has generated 1,800 suggestions from staff. In addition to building a performance-oriented culture, Basin’s feedback system has also had a noticeable impact on productivity and morale, Anderson said.

Of course, Basin pays close attention to its bottom line, with an ERP system providing real-time performance metrics that allow the company to adapt quickly to production issues. Automation helps here, too, allowing Basin to identify and resolve challenges with minimal disruption.

“Instead of devoting their time to physical tasks, our people are managing their area,” explained Anderson. “One human manages many systems.”

And by reducing the physical demands of labor, automation has the added benefit of opening up manufacturing jobs to more people. “It doesn’t eliminate jobs, it opens capacity,” Anderson said. “It allows you to do more with the people you have.”

As an example of the efficiency Basin has gained through automation, a manifold line requiring 90-100 set-ups per month to produce $9 million in revenue annually now requires only 12 humans, whereas the process once relied upon 32 workers.

Through automation, Basin has reduced its labor costs from 24% of revenue in 2016 to 14% of revenue in 2018—all while building a culture that understands and supports the company’s productivity strategy. A traditional machine shop with high labor costs has no choice but to cut workers when things get tough, explained Anderson. By contrast, Basin’s employees understand that as an automated shop, “we need you.”