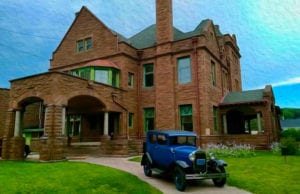 MADISON, WI. NOV. 18, 2019 – The City of Baraboo is receiving a $54,700 state grant to help transform the historic AL. (Albert) Ringling Mansion Ballroom into a new brewpub located in downtown Baraboo.

The Community Development Investment Grant from the Wisconsin Economic Development Corporation (WEDC) will support the renovation of the tourist attraction into a microbrewery and restaurant featuring a beer recipe that was discovered in a small box hidden under a floor in the mansion.

“The new brewpub will not only attract visitors and create jobs, but will also preserve a piece of Baraboo’s history by redeveloping a building that is over a century old,” said Missy Hughes, secretary and CEO of WEDC, the state’s lead economic development organization. “I applaud the City of Baraboo and owners for working together on a project that will honor the historic significance of the site while creating future opportunities for development.”

The City of Baraboo is working with AL. Ringling Brewing Co. to renovate the AL. Ringling Mansion’s ballroom into a new brewpub. The 18,000-square-foot Romanesque Revival mansion was built in 1905 by the oldest of the Ringling brothers, of Ringling Circus fame. It remained in the Ringling family until 1936 and then became an Elks Lodge. The Elks constructed a 6,000-square-foot, 300-person ballroom and six-lane bowling alley at the rear of the mansion in 1948. The Elks operated on the property for over 80 years until selling the property in 2013 to its current owners, Don Horowitz and Joe and Carmen Colossa.

Since purchasing the property, the Colossas and Horowitz and his partners have worked to transform the building into a bed-and-breakfast and museum called the AL. Ringling Mansion, which currently offers tours and event space. Since the discovery of the recipe they have been working with brewery partner Jon Bare to convert the ballroom in downtown Baraboo.

“We are proud to be part of Baraboo’s continuing development,” said Horowitz. “Opening our microbrewery will be a welcome addition to downtown Baraboo for residents and visitors alike. We are looking forward to the spring of 2020 and welcoming the community to enjoy our brewery and restaurant.”

The owners now plan to turn the home’s ballroom into a microbrewery and restaurant featuring the long-lost Ringling Family Original Beer Recipe from more than a century ago. The recipe was perfected over the last two years for production and will be considered the beer company’s flagship recipe.

The 6,000-square-foot brewpub will feature a seven-barrel brewhouse on display, a 40-foot bar offering the Ringling Family Original beer, and a taproom with a diverse list of beer styles and a menu featuring South American empanadas and Ringling family favorites. The open-concept taproom will have beer hall–style seating, live music and entertainment.

Expected to be completed by the spring of 2020, the planned AL. Ringling Mansion Inn & Brewery will be the first brewery in the nation housed inside a historic mansion.

The new brewpub plans to utilize local resources by hiring all local contractors for construction. Most of the brewing equipment is being constructed in Viroqua from Wisconsin Dairy tanks. The beers will be made using local ingredients, and entertainment will be provided by local bands and performers. Upon opening, the brewpub expects to employ at least 14 people.

According to the company, 3 million tourists visit Devils Lake each year, and this brewpub will help draw some of those tourists to downtown Baraboo.

WEDC’s Community Development Investment Grant Program supports community development and redevelopment efforts, primarily in downtown areas. The matching grants are awarded based on the ability of applicants to demonstrate the economic impact of the proposed project, including public and private partnership development, financial need, and use of sustainable downtown development practices.

Since the program’s inception in 2013, WEDC has awarded more than $24 million in Community Development Investment Grants to 101 communities for projects expected to generate more than $500 million in capital investments statewide.