As the number of downtown residents and pedestrians increases, the desire for pet friendly spaces has also grown. This has created a conflict in many communities, where downtown green space is at a premium, and not everyone agrees that pets are a welcome user group for these spaces. However, several trends point toward pet-friendly community policies as a potentially vital element of future downtown revitalization. Additionally, embracing pets can have significant payoffs, as pet ownership requires additional physical activity by owners, and also encourages resident interactions and builds community.

On average, 56 percent of individuals surveyed as part of downtown housing studies in Wisconsin are seeking pet friendly units and amenities as a condition of relocating downtown. This demand is driven by households on both the younger and older ends of the spectrum where pet ownership is particularly high. 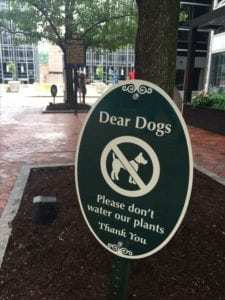 Allowing pets in park spaces is a priority topic for many younger residents. Pets are seen as part of the family, and are expected to come along on evening outings, including a stop at the park. For many communities, this expectation creates tension because it conflicts with implicit or explicit “no pets” policies for municipal parks, creating tension in the community. Some municipalities have responded by creating downtown dog parks (the number of urban dog parks in the U.S. has grown by 89 percent since 2007), designating pet-friendly areas, or adding amenities such as waste bag dispensers, garbage cans and pet-friendly drinking fountains, although others have responded by posting signage discouraging pet activity. 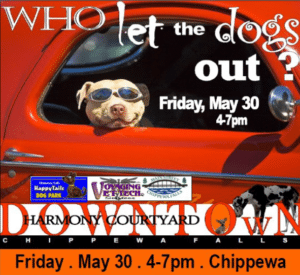 Chippewa Falls Main Street Targets Pet Owners with the Who Let the Dogs Out event.

Outdoor events are also seeing increases in pet traffic. In some cases, event managers have had to specifically restrict or prohibit pets due to crowd safety concerns. However, in other instances pets can be incorporated into events as a way to attract a wider audience by catering specifically to pet owners. In Chippewa Falls, the “Who Let the Dogs Out” Friday evening event welcomed dog owners downtown. The event featured a dog microchipping station, an art activity for dogs, pet photography, a service dog meet-and-greet, dog product vendors stationed throughout downtown, and dog treats available at local businesses.

Many businesses are embracing the trend as well – from local shops with a ‘host dog’ to the rapidly growing number of pet groomers and even pet-friendly patios at restaurants, bars and coffee shops.