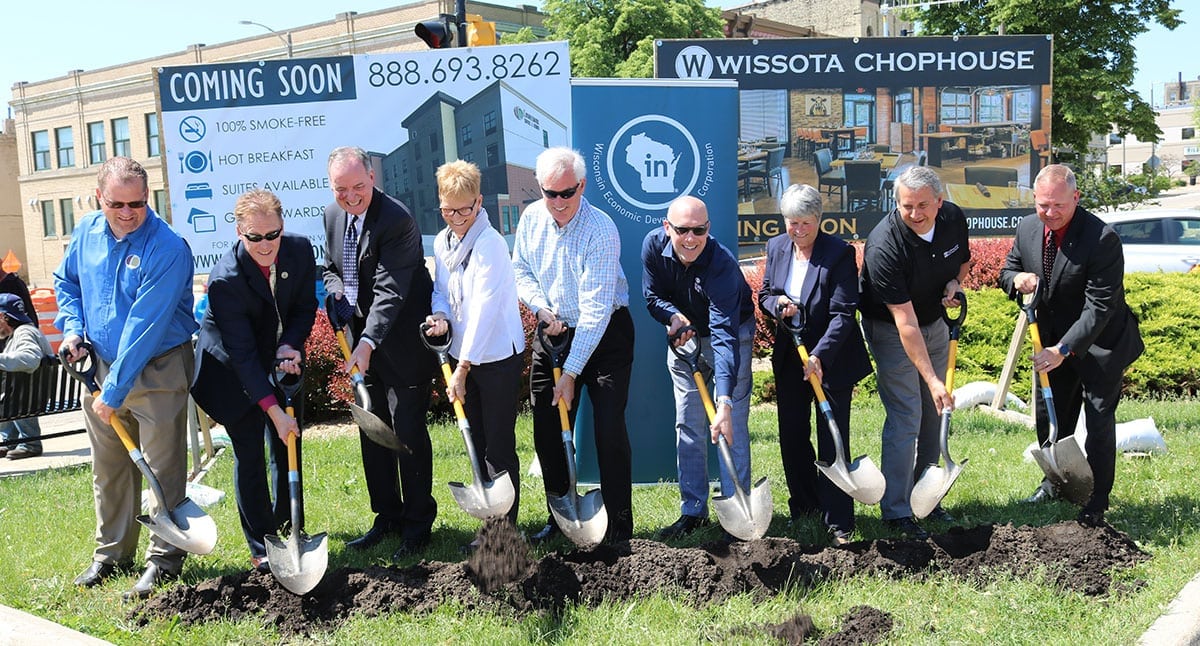 WEDC officials in June joined city leaders at the groundbreaking for a Cobblestone Hotel in Janesville, the city’s first downtown hotel. The 53-room hotel is expected to open early next year. 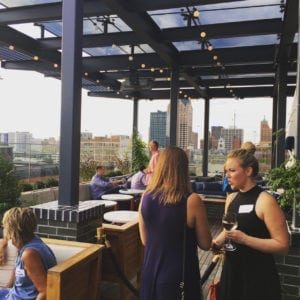 The new Kimpton Journeyman Hotel in Milwaukee’s Third Ward, which was supported by a WEDC grant, features a rooftop restaurant and bar.

When the new Cobblestone Hotel opens its doors in downtown Janesville in early 2019, the 53-room hotel overlooking the Rock River will do more than just give out-of-town visitors another place to spend the night.

The hotel, which is now under construction on an old municipal parking lot, will also provide a boost to the local economy, as restaurants, retailers and other downtown businesses expect to see an increase in customers and sales once the Cobblestone opens.

“This project is really huge. It’s going to be an anchor in the center of our downtown,” explains Janesville City Manager Mark Freitag. “We have this old parking lot that has been nice and convenient, but it’s not really a very good use of this property that’s on the river and on our main street.

“We’re excited about bringing a hotel here that gives people a place to stay, but also allows them to take advantage of all the things that are going on in the downtown,” he adds. “It’s a major piece in the great puzzle of improving our downtown.”

What’s happening in downtown Janesville is taking place throughout Wisconsin, as hotels are popping up in communities of all sizes. In Rock County alone, for example, the Cobblestone is one of five hotels now under construction and expected to open by the middle of next year.

When a new hotel goes up in a community—particularly in a downtown business district—it provides numerous economic benefits. For starters, a new hotel creates jobs—both during the construction phase and once the business is operational. In Janesville, the Cobblestone is expected to create about 35 jobs during construction and 15 permanent jobs when it opens. Those figures don’t include the additional indirect jobs that will be created during construction and once the business is up and running.

In Wisconsin, the hotel industry supports 63,000 direct jobs and another 46,000 jobs indirectly—with total annual wages and salaries of $4 billion, according to the American Hotel & Lodging Association.

A new hotel also generates additional tax revenue for the community and the state. The Cobblestone alone will add about $3 million to Janesville’s tax base when it’s finished. Statewide, the hotel industry generates $537 million in state and local taxes, the industry association says.

Perhaps the most significant impact, however, is the ripple effect that occurs when a hotel opens downtown. In Janesville, the Cobblestone is the city’s first downtown hotel, and city and business leaders look forward to the impact it will have on nearby businesses.

“When visitors stay overnight, they spend twice as much as a day-trip visitor,” explains Errin Welty, downtown development account manager for WEDC. “They eat more meals in the community, go out for entertainment in the evening and shop at downtown retailers.

“Having all of these customers available and ready to spend money, especially during hours when workers are not available, is huge for downtown businesses,” Welty adds.

The numbers back that up.

A 2016 study commissioned by the American Hotel & Lodging Association says that for every $100 spent on lodging, hotel guests spend an additional $221 at other businesses. In Wisconsin, the hotel industry pumps about $13 billion annually into the economy, the association says.

That significant economic impact is a key reason that WEDC, the state’s lead economic development organization, has provided support for the development of a dozen hotels over the last three years. In many instances, such as Janesville, WEDC awards grants through its Community Development Investment Program, which invests in projects that primarily benefit a community’s downtown. In addition to Janesville, WEDC this year has awarded CDI Grants to support construction of the Hotel Goodwin in Beloit, Hotel Retlaw in Fond du Lac and the Heritage House Hotel in Kenosha.

In cases where a historic building is being renovated for a hotel, WEDC may also award tax credits under Wisconsin’s Historic Preservation Tax Credit Program. That program was used in Green Bay for the redevelopment of historic Hotel Northland, which was built in 1924 and has been vacant since 2010. The $33 million high-end boutique hotel is expected to open downtown this fall.

Beyond the dollars, the presence of a hotel in a city’s business district has other intangible benefits as well, Welty says.

“If you’re a major corporation located downtown and you’re bringing in clients, you can really benefit from having a hotel in close proximity,” she says. “It makes it easier to recruit potential employees and entertain customers when a hotel is nearby. If guests have to travel out of town or back to the highway, it significantly lessens the overall experience of their visit and could make a business less competitive.”

Some of the hotel projects that have received support from WEDC include: