Sometimes significant community interest in a particular use exists, but sufficient market information to support private sector investment in the project may be lacking. In these instances, market studies or site planning efforts can help define the scope of the opportunity and facilitate profitable projects. Funding for feasibility and planning efforts can come from a variety of sources, depending on the intended future use and local demographics. However, WEDC offers two tools commonly used in downtown: Brownfield Site Assessment Grants and Community Development Investment (CDI) Grants. These funding sources both include planning categories that can help to identify specific environmental concerns or quantify market opportunities, both necessary steps to recruiting private investment partners. 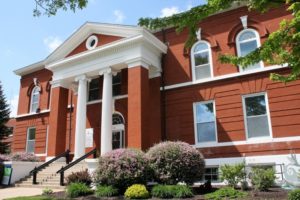 Green Lake is known for its small-town feel and mix of locally grown businesses. When its historic courthouse became vacant, the community approached WEDC, which provided $6,500 toward the $25,000 feasibility study to jump-start the renovation of the 40,000-square-foot former courthouse facility in the center of Green Lake. Following the completion of the study, the nonprofit ownership group invested in upgrades to the facility, which is now home to 23 local tenants, including several entrepreneurs who make use of the certified commercial kitchen. In addition, the center hosts many community and youth-oriented educational programs.

In an effort to leverage its unique and historic warehouse designed by Frank Lloyd Wright—the only known such structure—Richland Center successfully applied to WEDC to receive $2,400 toward the $25,000 planning effort to preserve and find a viable use for the structure. Since the plan, a group of citizens has formed a nonprofit to purchase the building and is raising funds to refurbish it. The building is now open for public tours and to host events and has a first-floor gift shop.

In the instance of the long-vacant and contaminated 30-acre Tecumseh site in New Holstein, WEDC provided $7,500 toward the $30,000 planning and feasibility study. The site includes more than 440,000 square feet of structures, was vacated following corporate bankruptcy, and was the subject of multiple U.S. Environmental Protection Agency cleanup activities. The study identified several sub-area plans for the site, and a 40-acre portion has been identified for the $8 million Market Platz development, which will include mixed-use development and a craft brewing center.

A similar 30-acre riverfront site in Stoughton was also the recipient of a $10,000 CDI Grant for planning, facilitating a $40,000 feasibility study and plan to redevelop 30 acres of vacant former industrial properties located along the river and adjacent to downtown. Following the plan, title issues were addressed, environmental studies were completed, the city invested $750,000 to acquire 10 of the 16 acres, and a request for proposals (RFP) was created (and will be issued once cleanup is complete). The city is also pursuing purchase of strategic properties in the study area.

On a larger scale, WEDC invested $17,500 toward the $140,000 Park East Marketing Plan, which was unveiled in June 2014. These marketing materials were used as part of two additional RFPs to secure developers for all remaining parcels of the Park East Corridor. Proposed projects on these remaining sites represent $447 million in total development, including 1.5 million square feet of residential, office and retail space, an NBA practice facility and public space. These uses are anticipated to bring 3,700 jobs to the corridor.