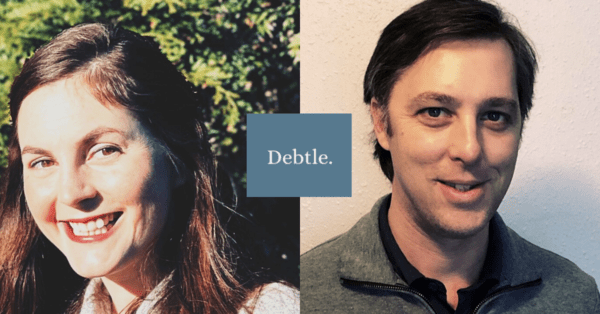 Stephanie and Houston Hoskins consider debt to be a four-letter word—and not just in the literal sense. It’s something that’s everywhere, and affects nearly everyone, yet nobody wants to talk about it. With their financial technology (fintech) startup, Debtle, they’re working to change that. Debtle offers a technology-based solution for individuals to negotiate and settle medical and other types of debt. And like more and more tech startups, they’re not doing it in Boston, Silicon Valley or even Chicago. They’re doing it from Wisconsin—Sheboygan, to be exact.

Sheboygan wasn’t always the plan, but it’s turned out to be a key part of their success. The couple was living New Orleans when Stephanie came up with the idea for Debtle while working in health care administration, witnessing the impact of bad debt on both providers and patients.

Neither Hoskins had background in tech, so they spent most of 2018 talking to software developers and learning as much as they could about what it took to launch a startup. They incorporated in April 2019 and started seeking funding to build out pilot projects. When the COVID-19 pandemic hit a week after they had their second child, they decided to move in temporarily with Stephanie’s parents in Kohler, Wisconsin.

Between Wisconsin’s high standard of living and vibrant startup community, it only took them a few months to make that decision permanent.

“We really thought we would just be here two weeks and then go back to business as usual,” says Houston. “When you’re living with your wife’s parents and working on a startup, you start taking a lot of drives to get out of the house. One of the things that hit me is the beauty of this area, in Sheboygan on Lake Michigan during the summer.”

They also saw Wisconsin’s entrepreneurial spirit. “Every time we’d drive around, Houston would say, ‘Wow, Wigwam socks are from here? Johnsonville is here?’ We knew Kohler Co. was here but seeing all these other recognizable Wisconsin-based companies, with a lot of them like Acuity, huge companies, based around Sheboygan,” Stephanie says.

By this point they had already connected with the Sheboygan County Economic Development Corporation and were impressed by the level of collaboration among the different startup resources available to them. Learning about the efforts to develop venture capital capacity within the state, as well as seeing how the state had prioritized small business support during the pandemic, convinced them that Wisconsin offered their startup much more opportunity than Louisiana. Locating in Sheboygan, halfway between Milwaukee and Green Bay, would let them participate in both cities’ startup cultures.

“What we saw in Wisconsin right away is that they’re all working together. The Surge is not competing with New North, WEDC or the Governor’s Business Plan Competition. Nobody is trying to reinvent what the other person is doing, and that enables more connectivity among the regions,” says Stephanie. “Wisconsin just kind of ticked all the boxes that we felt were missing in Louisiana. I think the biggest thing is the support and the excitement around Debtle’s potential.”

While large corporations consider bad debt “just the cost of doing business,” but not all industries (nor individual consumers) feel the same way. Working in health care, Stephanie says, the mantra was “no margin, no mission.” Debt impacted the service they could provide, but despite patients often reaching out to negotiate their medical debt, there were no systems in place to facilitate such negotiations.

“It was so frustrating because it just wasn’t feasible to put a process in place to enable front line staff to negotiate every individual account,” she says. “We saw that it was very inefficient from the consumer side too, because neither side trusts each other. We don’t trust debt collectors, and debt collectors don’t trust the person who owes the money when they say they’ll pay. So negotiations break down.”

Debtle is a software-as-a-service (SaaS) solution that simplifies the process of negotiating and settling debt directly between organizations and their customers by addressing both the inefficiency and the lack of trust. Companies can set protocols that let their employees settle debt directly. With everything documented in writing, consumers get a layer of assurance that the company will follow through on the agreement.

Both groups benefit from not having debt turned over to collections. Companies recover more payments, and consumers avoid damaging their credit—something that can negatively impact their ability to buy a home, start a business or even get a job.

“It’s kind of frowned upon have married cofounders for a company. It worried a lot of investors, just because the divorce rate is so high. But the divorce rate of founders that aren’t married is pretty high as well. We never let that deter us. Now we just say, ‘Would you like us to get divorced now so you can give us the money?’ They usually laugh and realize how ridiculous it sounds,” Stephanie says.

“Entrepreneurship can be a very lonely journey, especially when you’re still starting out. You don’t have coworkers to bounce ideas off, celebrate the small victories, commiserate after a bad meeting. But when you’re married to your cofounder, you can do that. We get to have these organic conversations that come up randomly while we’re sitting on our porch having a beer,” she points out. “We’ve already figured out how to disagree productively, to compromise and come to a solution.”

“When we went from idea to company, it wasn’t just ‘we’ve got this cool idea I’m sure will work because people need help with this.’ That’s not enough to build a business on. But it is if you have the right people at the core,” Houston says. “I think a lot of Stephanie—I married her—but independent of that, I have a lot of respect for her and her decision-making ability, in her ability to manage. She is very much a business leader, so that made the decision to become a company very easy to make.”

Their verdict on the move to Wisconsin? “We’re very glad to be here. We love it. There is nothing here in Wisconsin that has left us lacking,” says Houston.

Debtle has gained considerable momentum since Stephanie and Houston relocated. They won both The Surge and the NEW Launch Alliance pitch competitions and landed on WisconsinInno’s 2021 list of startups to watch.

In February, Debtle launched their first non-pilot sites in the health care industry. They plan in to scale within that industry while also lining up additional pilot projects with companies in banking, utilities and property management.