Luke Zahm discusses how he’s moving his restaurant forward in the wake of the pandemic in Wisconsin. Join Missy Hughes, secretary and CEO of WEDC as she talks to the chef and owner of Driftless Cafe and Wiscochef Enterprises and host of the “Wisconsin Foodie” television show about his restaurant business before and after COVID-19. 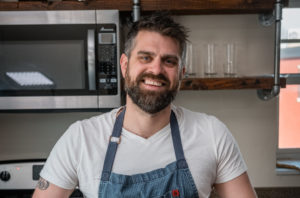 Luke Zahm grew up in La Farge, Wisconsin- a rural community in the heart of Vernon County with a population of 775 residents.   As a kid in a small town looking for an identity, he found it in a newly formed cooperative of family farmers that became Organic Valley.   Food became the vehicle for his aspirations to build strong community between farmers and diners in the Driftless Region.   Currently, Vernon County has the second highest concentration of organic farmers in the United States.

Luke started cooking in small kitchens in Wisconsin and fed his passion for food with work ethic, drive and a love of the Wisconsin identity.  He returned to Viroqua in 2011 to pursue a restaurant that could showcase the bounty of the Driftless region.   The restaurant, aptly titled “The Driftless Cafe” became the stage for an ever- changing menu of local foods, highlighted by the farmers from the region who produce the menu.   More than just a farm-to-table restaurant, the operation spans into the community and spends 85% of its food budget on ingredients that are sourced within a 100 mile radius of the Cafe.

Luke has been named a two-time Edible Madison “Local Hero Award” Winner, a 2017 James Beard Semi-finalist for Best Chef Midwest, and has spent time in Washington D.C. lobbying as a part of Tom Colicchio’s “Plate of the Union” campaigns.

Most recently, Luke has been asked to host the 2020 season of “Wisconsin Foodie”. Wisconsin Foodie is an Emmy® Award-winning television series dedicated to discovering the stories behind the food we eat. Wisconsin Foodie artfully blends food, cooking and travel while showcasing local businesses, restaurants, purveyors and farmers – telling their story and helping to promote a local, sustainable economy.

Luke and his wife Ruthie, daughter Ava and sons Benjamin and Silas all live in Avalanche, Wisconsin.