For water entrepreneurs, a soft landing spot in Milwaukee

For water entrepreneurs, a soft landing spot in Milwaukee 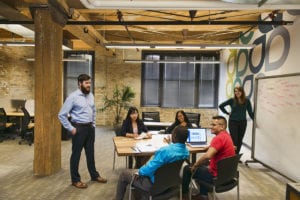 When the Global Water Center opened in 2013, it contained a variety of office space configurations for water technology companies of varying sizes—from early-stage startups to midsize, established companies—as well as lab space for academic researchers.

In response to this demand, in January The Water Council (which operates the Global Water Center) opened the Oasis coworking space. Located on the second floor of the Global Water Center, the Oasis acts as a “soft landing” spot for water entrepreneurs from elsewhere who are interested in locating their startups in the Milwaukee area. In the case of larger companies considering a move to Wisconsin, the Oasis can act as a home base for executives to operate out of when they visit for planning meetings, and can serve as temporary office space during the search for a more permanent location in the area.

Since its January opening, the Oasis has had between five and eight of the 12 total spots reserved at any given time. Recently, two employees of Massachusetts-based GEI Consultants rented space in the Oasis while they searched for a Milwaukee-area home for the company, and was able to successfully sign a lease and move into its new space, with a total of four full-time employees and one part-time so far in Wisconsin.

“The Milwaukee market has been a target of GEI since we opened a Midwest regional operation in 2010,” said Ben Sawa, the company’s vice president of marketing. “Our engineering, environmental, water resource and construction services fit well with the growing needs of southeast Wisconsin. In addition to the flexibility of maintaining a presence in the Milwaukee area while evaluating alternatives for permanent office space, we benefited from the Flow Lab and other research facilities in the building, as well as networking with other companies and researchers in the building.”

“We are pleased that the demand and uptake for space in the Oasis has been as we anticipated,” said Karen Frost, vice president of economic development for The Water Council. “There is continued interest in the space, and we expect tenants to be transitory.” Frost noted that the space’s existence is especially important for international companies that may need firsthand experience to evaluate the U.S. and Milwaukee as a location.

The current going rate for a workspace in the Oasis is $325 a month, with drop-in space also available. The 1,000-square-foot space offers high-speed internet and around-the-clock access. Workspaces come fully furnished. Beyond the physical space of the Oasis itself, tenants have access to all features of the Global Water Center, such as the ability to book meeting space and attend any presentations, receptions and other programming that occurs in the building, as well as informal networking opportunities based on being in the same building with leading water technology companies and researchers.

The Global Water Center is the centerpiece of Milwaukee’s Water Technology District, which saw more than $211 million public and private investment from 2010 to 2015, according to a UW-Milwaukee economic investment analysis.