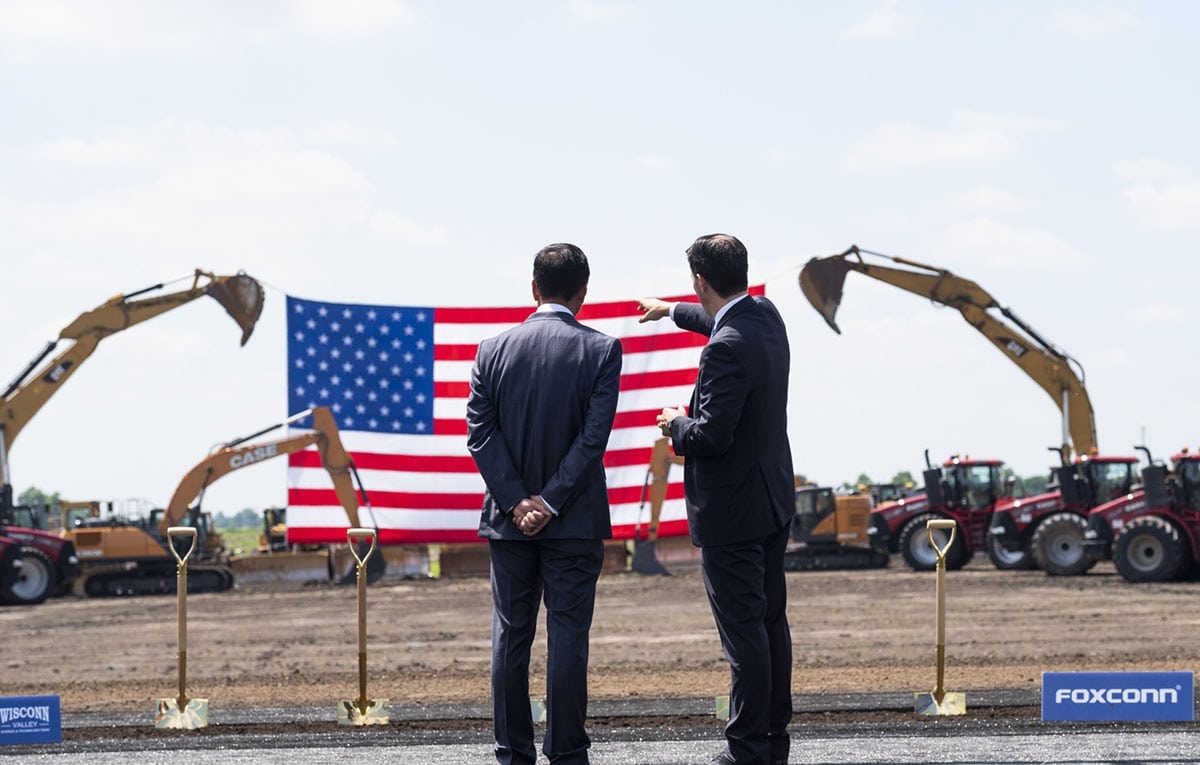 Less than one year after it was announced that the Foxconn Technology Group had selected Wisconsin as the home for its $10 billion advanced manufacturing campus, company executives joined Governor Scott Walker, President Donald Trump and numerous local, state and federal leaders in a groundbreaking ceremony on June 29 in Racine County.

As hundreds of invited guests watched live on various large-screen TV monitors in a building near the construction site, President Trump, Governor Walker, U.S. House Speaker Paul Ryan and Foxconn founder and Chairman Terry Gou officially broke ground on the $10 billion project, which is expected to create up to 13,000 jobs.

“This is a historic moment for our entire state and our country,” Governor Walker said. “Wisconsin won Foxconn and the first LCD manufacturing facility in North America thanks to our outstanding workforce and strong manufacturing legacy.”

“We are proud to mark this historic occasion and formally start construction of our state-of-the-art science and technology campus in America’s heartland,” added Chairman Gou. “Over the past year, we have formed strong partnerships with communities across Wisconsin and we look forward to continuing to work with the talented, hard-working people here in the years ahead.”

Dozens of workers are already on the site, as construction is underway on the first phase of Area 1 of the Wisconn Valley Science and Technology Park in Mount Pleasant. Once the facility is completed in three to four years, it will produce displays that will be used in a wide range of devices and solutions, from the latest generation of notebooks to monitors, self-driving cars, aircraft systems and TVs.

The campus will also serve as a science and technology park to promote research and development in advanced technologies in areas such as cloud computing, mobile devices, Internet of Things, Big Data, artificial intelligence, networks, and robotics and automation.

Attendees at the groundbreaking ceremony had the opportunity to get a firsthand look at some of that technology by touring a showcase of cutting-edge applications that will be used in Foxconn’s next-generation display technology in areas such as education, personalized entertainment, health care and medical solutions, advanced manufacturing systems, interactive retail, and safety.

Among those who toured the displays was Tom Still, president of the Wisconsin Technology Council.

“This is sort of like being in the Epcot Center of technology,” Still said. “There’s so much going on, so much to see—everything from education and transportation to artificial intelligence and smart cities. The presence of Foxconn and its vast array of technology means that it can touch so many sectors in Wisconsin. It’s hard to imagine a sector that won’t be touched by the technologies that are on display here today.”

“This is a historic moment for our entire state and our country. Wisconsin won Foxconn and the first LCD manufacturing facility in North America thanks to our outstanding workforce and strong manufacturing legacy.”