International connections old and new are strengthened at WEFTEC

International connections old and new are strengthened at WEFTEC 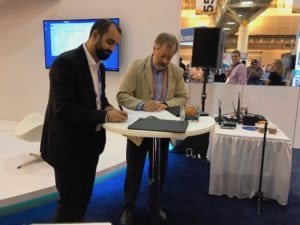 Xavier Amores Bravo, manager of the Catalan Water Partnership, and Dean Amhaus, president and CEO of The Water Council, sign a memorandum of understanding on Oct. 2, 2018, at WEFTEC in New Orleans.

The Water Council signed a memorandum of understanding with the Catalan Water Partnership of Spain yesterday in New Orleans at WEFTEC, the Water Environment Federation’s Technical Exhibition and Conference. The agreement is the latest example of international connections The Water Council has forged to help Wisconsin’s water hub capitalize on the innovation taking place around the world, and help the rest of the world benefit from Wisconsin’s innovations.

This marks The Water Council’s 17th international agreement for collaboration. The organization has existing agreements with partners in Germany, France, the Netherlands, South Korea, China and Israel, among others.

Each partner brings its own local concerns and cultural issues, and the partners learn from one another’s perspectives as well as the innovation taking place in partner regions. Partners may range from a highly developed organization like the Water Alliance in the Netherlands—where water management issues date back thousands of years—to the Catalan organization, which developed more recently.

“We are constantly looking for good partners,” Dean Amhaus, president and CEO of The Water Council, said during a panel yesterday highlighting these international connections. But, he said, “there’s got to be a reliable, trusted partnership to be able to work with”—in other words, an organization with solid leadership and community connections, and a real desire to interact and collaborate in substantive ways.

Amhaus noted how companies in Wisconsin’s water cluster sometimes need to be convinced to export their products and technologies, even though the case for exporting should perhaps be obvious given the potential for increased revenue and impact. Being connected to organizations in smaller European markets, where the vast majority of companies’ sales come from exports because domestic markets are so small, can help Wisconsin companies broaden their perspective, he said. 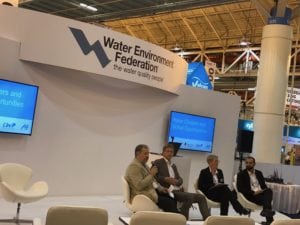 Likewise, Anja Rach, a board member of the German Water Partnership, said during the panel, “Germans are very product-focused and quality-focused. They think if their product is the best, it will sell itself”—but due to the collaboration with The Water Council, German Water Partnership member companies have learned from their U.S. peers about the value of networking and marketing their products.

Hein Molenkamp, managing director of the Water Alliance, noted that these collaborations often expand beyond water technology. For example, through Wisconsin connections, Dutch water technology companies learned about the World Dairy Expo that takes place each year in Madison and decided to attend the show to connect with companies in the dairy industry that may be able to use their technologies. Partnerships among water clusters “aren’t just about water technology,” Molenkamp said. “They’re about cross-sectoral innovation.”

The prior day, Amhaus was part of a panel about Israel-U.S. collaboration in water technology. In 2017, The Water Council signed an accord with the Israel Innovation Authority to collaborate on piloting and developing new applications for the Milwaukee Metropolitan Sewerage District and other Wisconsin water utilities, and another accord with the Zuckerberg Institute for Water Research at Ben-Gurion University of the Negev to increase collaboration and research in water-related issues between Wisconsin and Israel as a first step to setting up an Israel branch of Wisconsin’s National Science Foundation-sponsored Industry/University Cooperative Research Center for Water Equipment and Policy.

And just last week, several of the same partners were in the Netherlands for European Water Tech Week, and signed a declaration of global cooperation among The Water Council, the Water Alliance, and organizations in Israel, China, Singapore and South Korea.

The signing of an agreement is just the beginning, Amhaus said yesterday, and each relationship develops and matures over time: “You need time to understand each other.”