Since its inception in 2005, the microlending website Kiva.org has funded more than one million loans that total over $1 billion in value, and in the process has given entrepreneurs around the world access to capital they would not otherwise have.

Kiva has focused on alleviating poverty in developing countries, and in particular on providing startup capital to women, who in many parts of the world lack equal access to capital or labor markets because of patriarchal culture and strict division of labor along gender lines.

The microlending organization realized that some populations within the U.S. also lacked access to capital, so the Kiva Zip program—piloted starting 2011, and rolled out widely across the U.S. in 2015—was created. While Kiva’s loans in developing countries are typically administered by a partner organization, in the U.S., entrepreneurs get their loans directly from Kiva.

Now, entrepreneurs in Wisconsin’s minority business communities can get an extra boost, as WEDC and the state’s minority chambers of commerce have teamed up to provide matching funds for Kiva loans that are funded for Wisconsin entrepreneurs that have been approved through the chambers.

Anyone who is at least 18 years old and has a business in the U.S. can apply for a Kiva loan. If the loan is endorsed through one of the participating chambers, this turns on matching funds, decreasing the amount of time it takes for a borrower to raise the full loan amount.

For example, a borrower might request $500 to purchase livestock, but the loan could be funded by several individual lenders contributing amounts as little as $25 each. Loans are posted on the Kiva website for 30 days, and if the loan does not reach its full funding amount, it will not be funded. (Loans that are administered through a field partner instead of directly are usually still funded, with the difference covered by the partner organization.)

“We are thrilled with the support from the participating Wisconsin minority revolving loan fund trustees and WEDC,” says Nichole Crust, the Kiva Wisconsin program lead. “These matching funds will allow minority small business owners to maximize the financial support received through Kiva’s crowdsourced fundraising site to help them grow their businesses.”

For information on a loan matched by a specific chamber, click on the links above. For general program information, contact Nichole Crust at 414.610.8675 or nichole.crust@local.kiva.org.

Based in San Francisco, Kiva operates in 82 countries. It offers loans at a zero percent interest rate, and its loans have a 97 percent repayment rate. Once the loans are repaid, the Kiva lenders can withdraw their contribution or choose to reinvest it in a new loan for a different project.

Wisconsin first became involved in Kiva during the pilot phase of Kiva Zip, when the Wisconsin Women’s Business Initiative Corporation (WWBIC) partnered with the City of Milwaukee to get Milwaukee approved as the 11th Kiva city in the U.S.

As WWBIC began sharing the results Kiva was achieving in the Milwaukee area, partners including WEDC began to envision how that impact could be extended statewide, and came up with the idea of leveraging the Kiva funds already available through direct loans—since the pilot program had been extended nationwide—and making use of the minority chambers’ connections to help the funds make a greater impact on underserved communities.

WEDC provided $50,000 to each of the partner chambers during the current fiscal year for the purpose of allocating matching funds to Wisconsin-based Kiva loan proposals. To be considered for endorsement and matching funds, the borrower goes through a review process by the relevant chamber, including application, an interview over the phone or in person, and a request for additional information and documentation as necessary. As of Jan. 1, two of the four chambers have already provided matching funds through the new program: The Hmong Wisconsin Chamber of Commerce has matched one Kiva loan for a Waukesha-based business, and the African American Chamber of Commerce of Wisconsin has matched five loans for businesses based in Milwaukee and Plover.

“While this initiative is still in the early stages, it has great merit for minority-owned businesses in the state to advance that idea, and small business, with great funding support through Kiva,” says WWBIC President Wendy Baumann. “Kiva is part of the ecosystem here, and after a Kiva loan a business could go on to receive support from a microlender, a community development finance institution or even a traditional bank loan.” 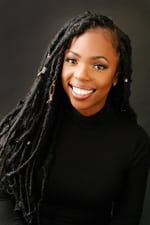 One of the first Kiva matching funds recipients in Wisconsin was Jazmine Henley-Brown of Milwaukee. Brown received a $3,000 Kiva loan for her company, the Henley Brown Media Group, which specializes in helping companies connect with a Millennial audience. The AACCW endorsed Brown’s loan request and agreed to provide matching funds on a Thursday, and the loan was fully funded on the Kiva website by Sunday evening.

Brown is using the loan to purchase computer equipment and software for her business, as well as for marketing and promotion expenses for Milwaukee’s first podcast festival, an event she conceived and coordinated through her firm, and which took place in October 2017.

“After living in several other cities, I came back to Milwaukee to start my business because I noticed that companies and media here needed help connecting with the Millennial age demographic,” says Brown. “This is the gap my company seeks to bridge, and I hope to amplify our efforts further by hiring employees in the near future.”

“This program has empowered the chamber to provide funding not only to amazing business owners, but to innovative, community-engaging programs as well,” says AACCW Business Outreach Specialist Kermiath McClendon. “Through these endorsements, we can provide non-traditional funding that enables more businesses to receive capital. This collaboration aligns with the chamber’s mission of supporting sustainability and growth of diverse businesses throughout Wisconsin.”

Hispanic Chamber of Commerce of Wisconsin

For general program information, contact Nichole Crust at 414.610.8675 or nichole.crust@local.kiva.org.