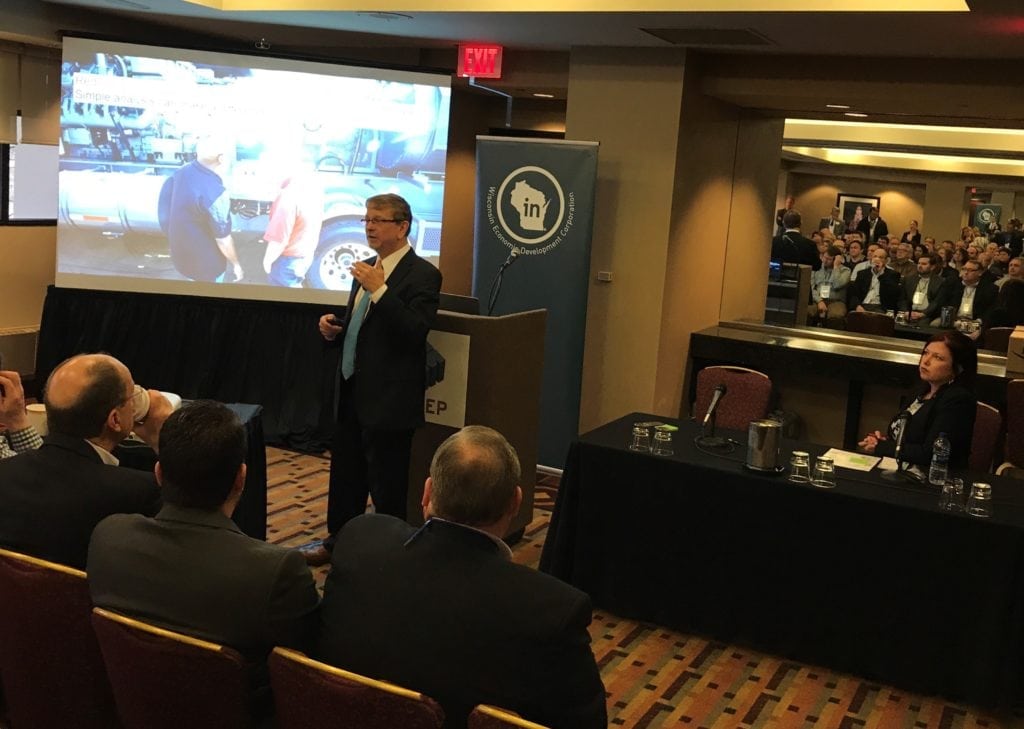 At the 2018 Manufacturing Matters conference, David Vasko, director of advanced technology for Rockwell Automation, speaks about how the Internet of Things has enhanced productivity for the company. Seated is Kelly Armstrong, sector strategy development director for WEDC, who introduced the session.

As technological and demographic trends drive change in the manufacturing sector, Wisconsin should be in the driver’s seat, not just along for the ride: this was the message of the 2018 Manufacturing Matters conference, whose theme was “Taking Charge of Change.”

The conference, organized by the Wisconsin Manufacturing Extension Partnership (WMEP) and held Thursday in Milwaukee, brings together manufacturers large and small from around the state for networking and education.

The Transformational Productivity Initiative (TPI) was a major focus in the sessions that featured speakers from WEDC, which was one of the event sponsors. The initiative aims to help manufacturers improve their bottom line through productivity enhancements, focusing on areas including technology implementation, operational excellence, human capital management, business development, and organizational structure and culture.

In a session that focused on TPI, Enno Siemsen, a faculty member at the Wisconsin School of Business and executive director of the Erdman Center for Operations and Technology Management, explained how the initiative is using the U.S. Census Bureau’s Management and Organizational Practices Survey to benchmark Wisconsin manufacturers against their peers nationwide and internationally.

Session attendees were given a replica of the Census Bureau’s survey to fill out and see how their companies stack up on widely recognized markers of strong management.

Consulting firms often apply these same measures when conducting their analysis, but TPI seeks to make this type of evaluation available to smaller or newer companies that may not be able to afford a high-priced consultant, Siemsen noted.

By working with companies one-on-one but also making the methodology available on the TPI website, “we’re looking at direct engagement, but we’re also looking at democratization of knowledge” so Wisconsin companies can simply access the information and put it to use on their own, added Randy Bertram, director of sustainability and operational excellence services for WMEP.

Kelly Armstrong, sector strategy development director with WEDC (WMEP’s partner in offering TPI), introduced a session exploring how Rockwell Automation has used the Internet of Things (IoT) “as a perspective and a lens” for all its operations, and how other Wisconsin manufacturers can do the same.

David Vasko, director of advanced technology for Rockwell, noted how IoT enables companies to use data to reduce waste and improve efficiency. He gave the example of a coffee roaster whose machines are often sidelined for long periods of time for repair and cleaning. By using data to predict when a given machine will need maintenance, the company can reduce downtime, stagger maintenance to avoid multiple machines being down at once, and minimize product waste from spoilage due to being roasted in a machine that is due for maintenance.

Manufacturers of all sizes can benefit from the data collection that is a hallmark of IoT, Vasko said: “You can’t optimize what you don’t measure.”

Keynote speaker Matt Fitzgerald, product vice president at Boston-based Rethink Robotics, spoke about the nimble, flexible robots of today, including those made by his company. Rather than replacing human workers, they are designed to work alongside humans, often in monotonous, repetitive jobs for which manufacturers have a hard time finding people to hire. Fitzgerald described how today’s robots have been designed with safety in mind, and in the case of “collaborative robots” such as those made by Rethink Robotics, are not limited to a single task or function, but rather, can be retrained to perform different duties depending on a company’s needs.

Another focus of the conference was helping manufacturers expand their exports in support of overall business growth. “We always like to see Wisconsin companies well insulated from an economic downturn,” said Roxanne Baumann, director of global engagement for WMEP, during a session titled “Strategic—not Accidental—Exporting.”

The session featured the export growth story of Lucigen Corp., one of the 2017 winners of a Wisconsin Governor’s Export Achievement Award. The company’s exports grew by 61 percent in 2016, and in 2017 reached triple the 2016 value.

Glaselyn Miller, Lucigen’s director of global sales and distribution, described the strategic approach the company took after completing the ExporTech Program in 2013—including an initial step of creating Miller’s position.

She described how the company implemented performance targets and tracking with its distributors, enabling them to identify and replace some underperforming distributors, and guide some others to better performance.

Lucigen also participated in global trade ventures to India and China, two of the key opportunity markets the company identified during its analysis as part of ExporTech. The trade ventures are opportunity for companies wishing to grow their exports, since aside from being offered at a subsidized cost, they also take care of logistics so “all you have to do is show up with your suitcase and great knowledge of your company,” Katy Sinnott, WEDC vice president of international business development, told the session audience.

“Wisconsin is the #1 state in America for veterans’ benefits,” Governor Scott Walker said, speaking of the state’s workforce development initiatives. “We are a top 10 state in the nation in terms of employing people with disabilities, and we want to keep growing there as well.”

Much of the discussion and questions at the event focused on the Foxconn project, which Governor Walker noted is expected to bring an increase in the state’s GDP of 1 to 1.5 percent by itself, regardless of other economic growth that occurs during the same period.

Because of the opportunities it will create for suppliers, and overall economic ripple effect, the project represents “a tremendous opportunity for everyone in this room and any other manufacturer across the state,” Governor Walker said.

Jela Trask, WEDC’s business liaison for the Foxconn project, shared that state officials are working closely with Foxconn to map out the company’s needs and procurement schedule so Wisconsin companies can be well positioned to supply the parts, materials and equipment needed for the project, as well as services such as construction, assembly and manufacturing operations.

She encouraged companies to enter their information in the Wisconsin Supply Chain Marketplace website in order to be considered as a supplier for Foxconn and its subcontractors. Interested parties can also follow Foxconn project updates on the web or sign up to receive them by email.