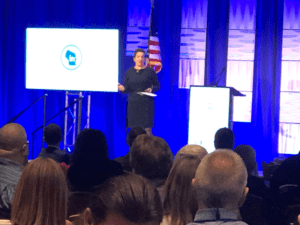 WEDC Secretary and CEO Missy Hughes spoke about the strength of the state’s manufacturing sector at the 2020 Manufacturing Matters conference.

Wisconsin manufacturers gathered in Milwaukee on Feb. 27 to hear from speakers and participate in workshops to help their companies make the most of current innovations in manufacturing. The 2020 theme for the annual Manufacturing Matters conference was “Focus and Go.”

In a video message to attendees, Governor Tony Evers noted the importance of manufacturing in Wisconsin, both historically and today. “Manufacturing has played, and continues to play, a vital role in our economy,” he said.

In her remarks, WEDC Secretary and CEO Missy Hughes described visits to three manufacturers during her early days in the secretary role—ATI in Cudahy, Marten Machining in Stevens Point and Hometown Trolley in Crandon. “We’ve been able to be with these companies, and with many of you, to help move these visions forward” for Wisconsin-made products that solve problems and make the world a better place, Hughes said.

Keynote speaker Steve Brown, known as the Bald Futurist, spoke about the rapid pace of change in the industry. With technologies such as automation, sensors, artificial intelligence and additive manufacturing transforming companies’ production processes, logistics, communications, supply chain and customer interactions, “this is a really exciting time to be in manufacturing,” he said.

With Wisconsin’s strength in the industry, Brown said, “You’re positioned to play a massive role in the future of global manufacturing.” 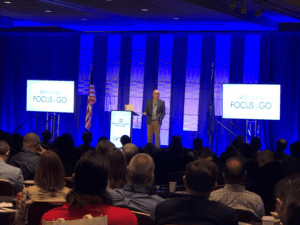 In his keynote address, Brown introduced the topic of automation with a reassuring message that robots are not slated to replace humans in the workplace or elsewhere, as Hollywood sometimes suggests. In fact, the benefits of automation include not only addressing worker shortages, but also easing physical demands on people. Robots, Brown noted, will always require human oversight, and companies need to strike the right balance between automation and augmentation. “25% of the robots of the future are projected to be co-bots,” he said.

“My dad was a floor technician, and when he started each day, he rolled his toolbox onto the floor. Today, technicians in automated shops start their day by rolling their robot onto the floor,” Graham said.

Panelists discussing their experiences implementing automation solutions within their factories stressed the importance of embracing the potential of new technology company-wide. “Getting the culture of the company involved to embrace and understand automation is important—not just the engineers, but the technical staff, too,” said Eric Pipkin, technical operations manager at New Berlin Plastics. Pipkin and his co-presenters identified “scope creep” as the biggest challenge to automation projects. Cory Larsen, automation leader at Trek Bicycle, cited three critical ingredients for success in implementing automation: repeatable processes, repeatable outcomes and manageable scope. Lindsay Feldt, engineering manager at Intense Engineering, noted that a major challenge in consulting with her clients is that “people don’t understand what robots can and can’t do.”

In a panel on “Integrating Sustainability Into Your Business,” panelists debunked the notion that taking a sustainable approach has to come at a premium, describing the sustainable measures their companies have put in place that pay for themselves or even save money.

Ben Reynolds, director of operations for Reynolds Transfer & Storage, said sustainability is one of three core values that the company asks employees to keep in mind with every decision they make.

“If you thread it into your culture, that’s where it gets embedded and you’ll see a lot of progress,” added Mark Alan, senior vice president of product management and development with Inpro.

Kevin Tubbs, vice president of global environmental affairs and sustainability with Oshkosh Corp., said job candidates often ask about sustainability efforts during the interview process, and that younger workers especially consider attention to sustainability a “must” when choosing an employer.

An outside perspective to improve productivity

Several of the sessions focused on resources offered by WMEP Manufacturing Solutions. For example, the Transformational Productivity Initiative helps companies identify areas of focus for bringing their operations in line with best practices and prioritize next steps for implementing new technologies to get the most productivity benefit.

Sara Esser, general manager with Spincraft, said the evaluation helped identify metrics so employees could have a shared vision of clearly defined success.

“There’s great value in having a trusted partner outside your company” to provide perspective, said Ken Schuh, operations manager for Dairyland Electrical Industries.

“Having an outside source come in and ask questions you wouldn’t have thought of can get you to look at things in a different way,” added Michael Esser, vice president of finance and accounting for Dielectric Manufacturing.

Representatives of Sussex IM spoke about the company’s experience in developing and implementing a data-driven culture—with  assistance from WMEP Manufacturing Solutions—after the company, founded in 1977 as Sussex Plastics and acquired by Rexam in 1999, was divested through a management buyout in 2010 and became known as Sussex Injection Molding, or Sussex IM.

With 500 employees across two facilities, the company specializes in custom injection and blow molding for industries including health care, cosmetics, consumer goods, industrial, home and garden, and agriscience. Examples of its products include Purel wall mounted dispensers and Revlon cosmetics compacts.

Kyle Kopp, vice president of manufacturing, and Megan Tzanoukakis, vice president of supply chain, explained how the company reduced waste and error rates, improved customer satisfaction and raised its employee retention rate through initiatives such as enhanced monitoring of efficiency and compliance with best practices, attention to safety and improved training methods, as well as applying creative solutions to areas where the error rate was higher than desired.