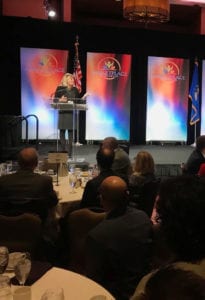 Owning a business invariably involves making mistakes and learning lessons along the way—but speakers at MARKETPLACE, the Governor’s Conference on Minority Business Development, sought to ease this path for their fellow business owners.

The featured speakers shared their advice and stories in hopes of saving their peers some from some of the bumps in the road they experienced.

Breakfast speaker Kristina Pence-Dunow, CEO of Hometown Trolley, told the story of contacting the White House after federal safety testing of one of her products was delayed so long it nearly caused her to lose a contract. She urged attendees to “be the squeaky wheel” and advocate for their own businesses when necessary. “Collectively, small business is powerful.”

Speaking on the meaning of leadership, Fisher said the word lead can be considered an acronym for four key components: starting a business can be lonely, it requires effort, your attitude can make or break you, and it requires discipline. “We need people that can embrace the lonely, embrace the effort, embrace the attitude and embrace the discipline,” he said.

The third breakfast speaker, Fred Dretzka, president of UPI LLC, quoted Mike Tyson: “Everyone has a plan—until you get punched in the face.”

“Things are going to happen,” he reminded the audience. “Your plans will change. Mine did.” But, he encouraged them, “Find your passion. If you do that, you’ll never work a day in your life.”

Rashi Khosla, president of MARS Solutions Group, spoke at the business workshops that were offered as part of the conference on Wednesday afternoon. Khosla, who left her corporate job in information technology to be at home with her children, said the transition was somewhat of a rude awakening because she soon realized that starting her own IT consulting business would mean working just as long hours, if not longer, than the corporate job. But ultimately, she said it was a good decision: “What it gave me was the flexibility to be present and to be my own boss.”

Khosla’s co-presenter, Nick Weissenborn, vice president of Aeroforce Logistics, emphasized the importance of the basics—such as answering emails promptly and making sure one’s résumé, business card and website are free of typographical errors—when starting a business. “Show up to a meeting when you’re supposed to,” he said. “Be dressed decently.”

In addition to featuring business owners as speakers, MARKETPLACE also features sessions that detail the resources available to small businesses in Wisconsin. On Wednesday afternoon:

A final Wednesday workshop gave a status update on the Wisconn Valley Science & Technology Park project and what Foxconn is doing to connect with Wisconsin suppliers, and specifically the minority-, woman- and veteran-owned businesses that are celebrated at MARKETPLACE.

Speakers from WEDC, the Department of Workforce Development, the Wisconsin Housing and Economic Development Authority, and Town Bank described how they are working together to ensure that Foxconn is aware of Wisconsin companies’ capabilities through the Supply Chain Marketplace, that Wisconsin companies have access to information about Foxconn bidding opportunities, and that those companies have the resources they need to scale up production as necessary to meet Foxconn’s needs.

“The scale and magnitude of this project has required us to think differently,” said Jela Trask, key business liaison for WEDC. “The range of inquiries has been so broad, and it’s just been so fascinating to learn about the range of companies in Wisconsin.”

In addition to workshops and speakers, the two-day MARKETPLACE conference includes an awards program and an Expo Hall with booths sponsored by Wisconsin companies as well as public- and private-sector resources providers.

The 37th annual conference, held Dec. 12-13, 2018, set records for the number of exhibitors (90) as well as the number of buyers (50) who registered to hold one-on-one meetings with potential suppliers.