Main Street Now, the national downtown development conference hosted annually by the National Main Street Center, was held this year in Seattle. More than 20 Wisconsin Main Street network individuals attended the conference as both participants and presenters. Blake Opal-Wahoske presented as part of the Great American Main Street panel, discussing strategies for districts hoping to achieve this prestigious honor. Nora Roughen-Schmidt brought her popular presentation on successful pop-up shop programs to a national audience, and Wisconsin Main Street staff Errin Welty co-presented with a Seattle-based peer on transforming forgotten spaces into third places, highlighting strategies for identifying and activating the overlooked spaces in downtown, followed up by a presentation of local must-see examples of these strategies in Seattle. 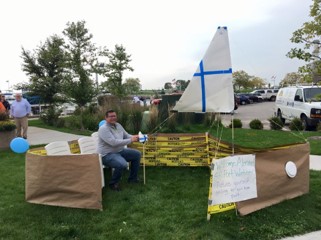 An example of placemaking

The theme of the conference this year was placemaking, which at its core is simply an effort to make our downtowns serve as places where people want to spend time. Considering our public and private spaces from the perspective of a visitor: How will they know where to go? Where will they sit? Are there places to get food, drinks or use the restroom? What about older visitors or children? Viewing downtown spaces from this new angle opens a new set of opportunities and considerations. Fortunately for communities with multiple competing financial demands, placemaking is easily done on a budget. All communities have forgotten corners that can be activated and made more comfortable with some shade or a strategically placed bench. “Lighter, quicker, cheaper,” one of the tenets of placemaking, advocates for an iterative approach to design: testing a concept and improving it multiple times before investing in any permanent infrastructure. This strategy not only increases the likelihood that future investments will achieve their goals (such as increased utilization, more diverse populations, or extended hours), but also generates support for the project, likely resulting in relaxed regulations and potentially increased overall funding.

Communities or individuals in Wisconsin interested in learning more about placemaking can attend one of two upcoming workshops on the topic this June in Viroqua and Marshfield. Facilitated by the Musicant Group, a Twin Cities-based placemaking firm, the two-day sessions will introduce participants to the concepts of placemaking, help them identify placemaking opportunities in the host community, and participate in an actual temporary placemaking installation. Online registration is available now. Main Street and Connect Communities members will have access to placemaking tools and worksheets to conduct local assessments following the workshops.