In last week’s blog, we highlighted a great alley transformation in Oskaloosa, Iowa, and described how improving the physical elements helped them create an inviting space. We touched on some of the events and gatherings they use the space for, but this week, we will highlight in more detail a few examples where the programming of the spaces made them destinations, rather than physical improvements.

We’ll start with Buckham Alley in Flint, Michigan. Back in 2011, in an effort to attract pedestrian traffic to the businesses located alongside this downtown alley, local residents organized a one-day music festival called the Buckham Alley Fest. In that first year, they had nine bands, fifty vendors, and nearly 1,500 attendees.

Buckham Alley Fest logo, and the alley before the festival enlivened it beginning in 2011. Photos MLive

That success sparked an enormous amount of interest, not only in Buckham Alley, but in several other alleys throughout downtown. It helped people realize that there are many unexplored areas they hadn’t noticed before. This interest led to the formation of a 501c3 called Friends of the Alley, whose mission is to create an entire pedestrianized alley system in downtown Flint and throughout Genesee County.

Photos from Buckham Alley Fest. Photos (L-R) by My City Magazine and WEYI

Having the non-profit status in place helps the organization raise funds and find sponsors for everything from the festival itself, including stage sponsors, to individual alley sponsors, art sponsors, and more. A local foundation and the Greater Flint Arts Council joined in as co-sponsors of the festival as well.

Celebrating its 7th year in 2017, the festival has expanded to include three stages and twelve bands, as well as arts, crafts, dancing, food, drinks, and street performers. It is now held in two alleys, with Brush Alley joining the festival to accommodate the larger attendance numbers. Both alleys now feature the signature twinkle lights that Buckham Alley has been known for since 2011. Once $50,000 was raised for the Brush Alley lights through their local crowdfunding efforts, a statewide program called Crowdfunding MI provided a matching $50,000.

The signature “twinkle” or rope lights in Buckham Alley (left) were replicated in Brush Alley (right) thanks to local fundraising efforts. Photos (L-R) by My City Magazine, and WSMH

In other larger cities, alleys are used as pedestrian corridors and festival spaces. The City of Seattle officially designated Nord Alley as a Festival Street, meaning it can close it off to vehicular traffic during events, which range from monthly art walks, poetry slams, jazz concerts, dance performances, and even showings of the World Cup and Tour de France. 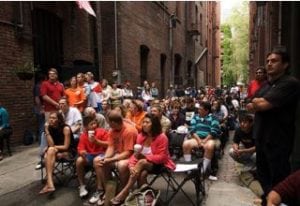 Nord Alley is used for events as simple as screenings of the World Cup or the Tour de France. Photo by soundersfc.com

In Philadelphia’s Chinatown North and Callowhill districts, a group called the Asian Arts Initiative has spearheaded a series of events to bring people of all backgrounds together, from residents of the homeless shelter on one end of Pearl Street Alley, to the luxury lofts on the other. They’ve created a culturally vibrant space that welcomes over three-dozen cultural groups. In addition to weekly micro-events and clean-up days, they host an annual block party. The event includes performances, activity booths, interactive furniture builds, and culminates in a community feast, served in the alley, on the tables and chairs constructed during the day. Individuals from all backgrounds sit side by side at the same tables to talk and interact. With an ArtPlace America grant in 2015, they created a pop-up art series for the alley that animates the corridor with installations, lighting, and greenery.

While these examples are from larger urban districts, they can easily be incorporated into smaller communities, since the focus is on the programming of the spaces, not necessarily on costly physical improvements.