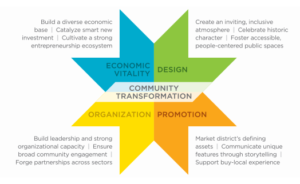 The Main Street America™ (MSA) holistic approach centers around Four Points™- Design, Economic Vitality, Organization and Promotion. Through these blog posts and accompanying newsletter, we strive to provide inspiration and guidance for working within this mindset. When meeting with MSA programs around Wisconsin, I am most often asked about promotion, particularly the purpose of events and events as fundraisers. I’ll take some time here to unpack this as I have come to understand promotion from my almost two decades in special event management and downtown development.

According to the National Main Street Center, “promotion positions the downtown or commercial district as the center of the community and hub of economic activity, while creating a positive image that showcases a community’s unique characteristics.” During Main Street orientation, we further explore the concept and three of its components: brand/image development, retail events and special events. In August 2017, we unpacked the concept of district brand; in May 2016, we explored measuring events’ impact. In the remainder of this post, I’ll delve further into retail events, special events and how both types of events relate to fundraising.

Simply put, retail events are meant to ring cash registers for the businesses within a district. This means that when planning a retail event, you should communicate this goal in advance with your district businesses and establish a way to measure impact—and just as important, don’t forget to communicate the impact you’ve had with your stakeholders. Some recent Wisconsin Main Street Awards winners highlight varied approaches to retail events. 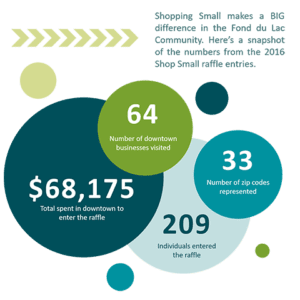 209 individuals entered the Shop Small raffle by submitting receipts for purchases made downtown between Nov. 1 and Dec. 31, 2016. Individuals received one entry for every $10 spent downtown. Submitted receipted totaled $68,175 in downtown spending and included transactions at 64 different downtown businesses. 33 different ZIP codes were represented in the entries, and two-thirds of spending downtown was done by consumers from Fond du Lac and North Fond du Lac, while $24,000 came from outside communities.

In 2017, Ladysmith Main Street continued its effort to expand the Winter Magic event to bring holiday cheer into the downtown area. For this family-oriented event, a number of initiatives were combined to create a center of activity downtown. Horse-drawn wagon rides were relocated back to downtown, campfire pits returned to the downtown plaza, and eight pop-up retailers provided new seasonal shopping opportunities, in addition to new interactive public art installations. These events attracted crowds to downtown, and, more importantly, shoppers to stores, which experienced record single-day sales totals. Although the event had a total budget of $400, the benefits were priceless. 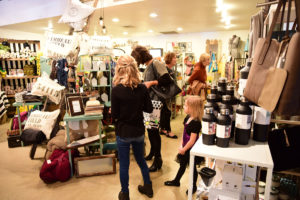 The inaugural year of De Pere Style helped put De Pere on the fashion map. The sold-out event featured a fashion show with offerings by eight local boutiques, followed by a district-wide afternoon shopping event. Stores offered in-store refreshments and specials, encouraging visitors to linger downtown for the entire day. Participating businesses saw upwards of 400 percent increases in same-day sales, and at least 80 percent of event attendees were first-time visitors to one or more participating shops. Looking ahead, there are plans to host both fall and spring fashion events, introducing still more customers to the myriad retail offerings available in the district.

Special events highlight unique assets of the area, whether they be natural, historical or cultural. These events exist to bring people downtown to develop positive emotional connections to the district and to view the progress of revitalization efforts. Special events, by their nature, are not meant to draw people into district businesses (note: restaurants and bars do tend to see increased traffic during special events, even when food and beverage is available at the event), but strategies can be employed to draw people back at a later time. One such tactic is a bounce-back coupon handed to anyone entering the establishment offering a free gift with purchase should they return during a specific period—for instance, three weeks. If you know of a local business utilizing such a strategy, remember to check back to inquire about the impact. To learn how approaches to special events can vary, read about these recent Wisconsin Main Street Awards winners. 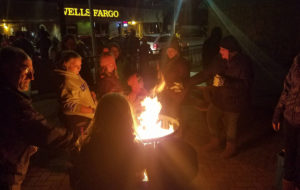 After attending a Wisconsin Main Street Placemaking Workshop in Rice Lake, Ladysmith brought back the idea of utilizing a campfire as a way to bring people together downtown. They decided that the best time to try it was during the Winter Magic Celebration, to coincide with other activities that day. The campfire started an hour before the parade in a small park between two buildings. A simple $60 portable fire pit was purchased by Main Street and firewood was donated. Volunteers assembled pre-made s’mores kits. A retailer next door sold hot coffee and tea, and ultimately dozens of people enjoyed the relaxed atmosphere, met new people, and kept warm. Many stayed long after the parade ended, and some offered to help with future campfires. 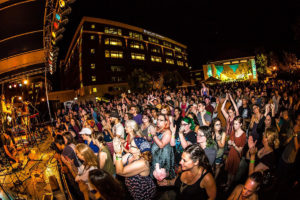 What started out as a small mural dedication in 2014 has quickly grown into a major art event highlighting La Crosse as a cultural and creative hub. The event is held outside of the Pump House, at the center of the city’s burgeoning arts district. The now-annual event is held the second weekend of June, and includes interactive exhibits, performances, music and demonstrations, both on the street and within businesses. The event highlights the creative talent that resides in La Crosse, including performers and artists as well as enthusiasts who appreciate their creations. In 2016, in just its third year, the event drew more than 1,000 attendees, and more than 50 artists participated. Organizers hope to grow Artspire into a regionally recognized arts event. 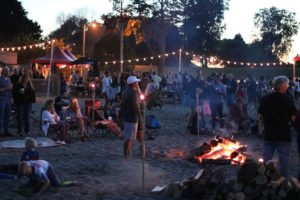 This three-day event was designed to activate a previously underutilized space within downtown Kenosha. Despite the name, the event did not only feature beer, but also live music, bonfires on the beach, food trucks and other activities. More than 15,000 attendees visited the beer garden during the three days, and the event was also a fundraiser for Downtown Kenosha Inc. Perhaps the most significant outcome of the event is the commitment by the city to invest $1 million into the site in 2018 to maximize the site’s potential to serve as a community gathering place for downtown residents and visitors. 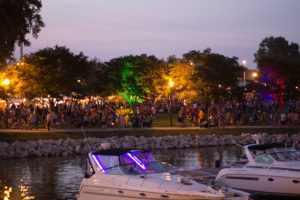 This four-event series was designed to showcase the arts community and underutilized areas within the On Broadway district. The event more than doubled its projected attendance and revenues, attracting more than 45,000 to experience the district. The event attracted visitors of all ages, reflecting the diversity of the surrounding community. More than 50 vendors were part of each event, and live demonstrations varied from night to night, including buskers, hot air balloons, fire jugglers, aerial yoga, improv comedy, drum circles and more, all combined with artists and food vendors. Future planning is already underway, with new event locations and a plan to help transition successful artisans and vendors into more permanent storefront locations On Broadway.

Events as a fundraising strategy

Even the simplest events cost money to produce, but nevertheless, many MSA programs count them as part of their organizations’ fundraising strategy. The concept is noble: if you can raise sponsorship over and above costs, sell concessions to realize a profit, or charge admission, then funds can cover operational costs. However, when calculating costs, organizations rarely factor in the value of staff and volunteer time. If they did, the $500 profit realized would be quickly eroded and the event would show a loss. This is not to say that events cannot be fundraisers, but my advice to programs is that if this is a goal, be sure to account for all costs so you know if you are truly hitting your target. If not, you may wish to make tweaks to the event or even discontinue the event if it is not a successful fundraiser, or reevaluate the event’s goals.