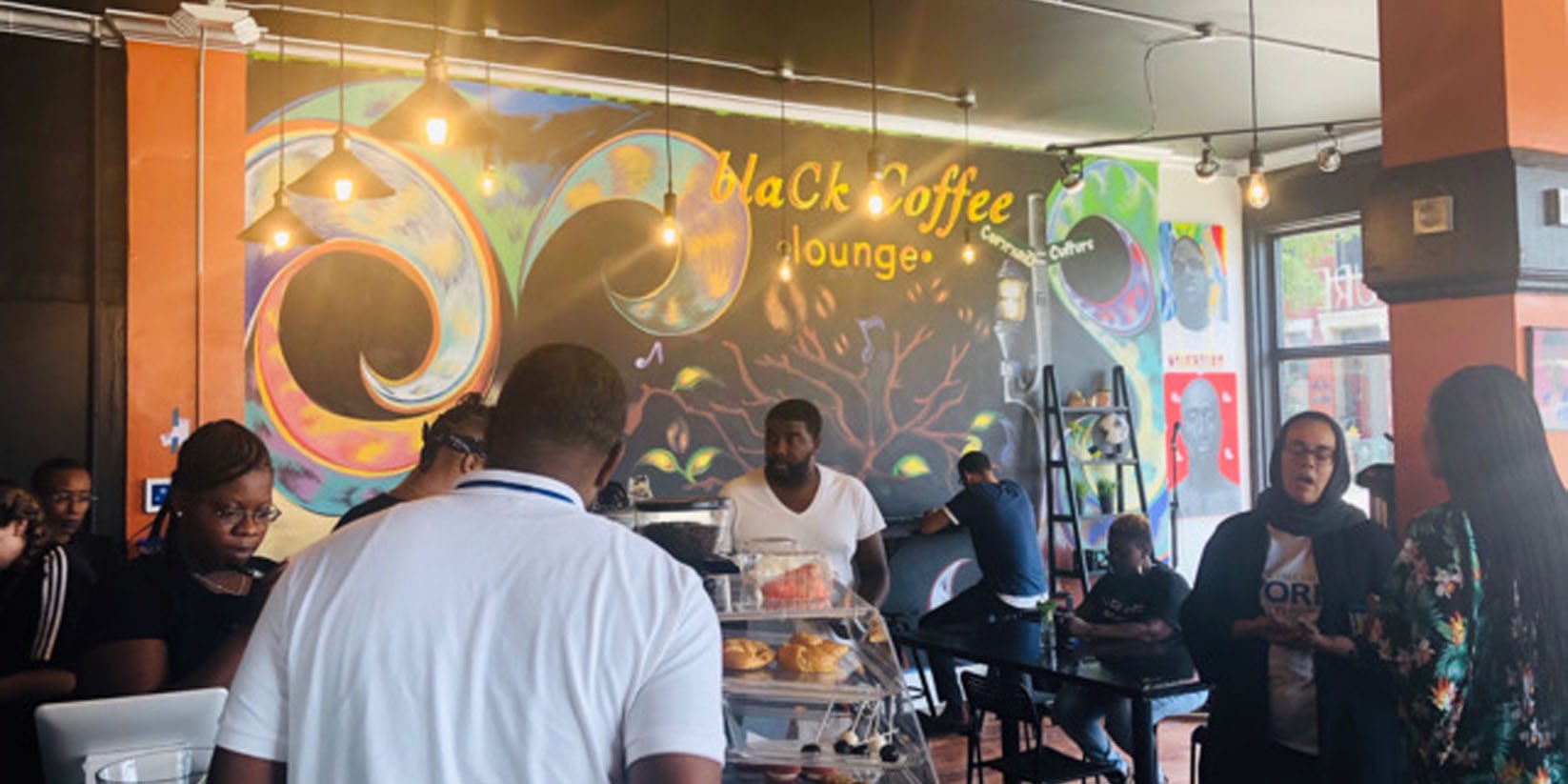 Black Coffee Lounge, a Black-owned business in Cincinnati, seamlessly incorporates artistic and cultural expression within its location in a historic commercial district building.

Following last month’s focus on diversity and inclusion in all aspects of the Main Street approach, this month’s blog post will explore how the design of façades, storefronts and business signage within Main Street districts can incorporate cultural diversity and expression.

One factor that can unintentionally crowd out diversity in cultural expression: the design guidelines, ordinances and other tools that ensure exterior façades are renovated with respect to each building’s history and the context of surrounding buildings’ architecture. While effective in creating a cohesive aesthetic that is visually appealing, these design standards can be overly limiting when a minority-owned business with unique cultural traditions seeks to locate in a historic district. The regulations and guidelines may actually prevent businesses from using design elements that would best equip them to attract their target customers.

This dilemma is certainly not new. New Glarus, a Wisconsin community built starting in 1845 by immigrants from Switzerland, is an example. Many of the community’s buildings have a Swiss chalet appearance, and their unique design is part of the community’s appeal to tourists. But many people don’t know that most of the Swiss chalet façades were actually added much later, and the community was originally built primarily in the Victorian and commercial vernacular style popular at the time. The Swiss immigrants who built the town used the prevailing building styles of their new country, not the styles from their homeland. Their heritage was still visible in some of the craftsmanship and building details, but only later did the community decide to play up its unique cultural heritage as a point of pride and distinction.

New Glarus was founded by Swiss immigrants in the mid-1800s, and today most buildings have a Swiss chalet style. Modern-day visitors may not be aware that many of these Swiss elements were added in the 1900s to buildings that had been built by the original Swiss settlers using non-Swiss styles.

Another example is the various Chinatown districts found in many major cities. In New York City, many of the Chinese-owned businesses are located in the ground floors of former tenement houses. Prior to the 1960s, Chinatown looked much like any other Manhattan district, with similar signage, façades and storefronts. It wasn’t until 1962 that the famous Kimlau Memorial Arch was erected, and in the 1980s banks started lending to businesses to encourage them to alter their facades using “Chinese elements.” It may have increased the tourism and popularity of the area, but from a design and cultural standpoint, it was inauthentic. After all, for the first 100 years of this “remade” neighborhood, business owners were successful with a mix of assimilation and tradition in design.

Images of Chinatown as it looks in New York City today. But most of the large signs and façades with “Chinese elements” were not added to these buildings until the 1960s. Prior to that, Chinatown looked much like other parts of the city.

For districts wishing to encourage cultural expression, beware of the dangers of oversimplification. In the 1980s, when banks in New York encouraged Chinatown businesses to add these “Chinese elements” to their buildings, they assumed there was one uniform Chinese design style. New York City’s Chinatown is home to multiple cultural groups with many different languages spoken—e.g., Cantonese, Taishanese, Fujianese, Taiwanese and even Vietnamese. Just as Santa Fe, Seattle and Milwaukee are all U.S. cities, yet have very different building styles, China also has significant regional variation in building styles.

Similarly with Hispanic cultures, while there may be some commonalities between Spain, Mexico, Colombia and Cuba, it would be a mistake to try to shoehorn them all into one set of design standards that is overly limiting. Choosing a set of design elements that relies on a stereotype—such as sombreros and chile peppers—can cause an attempt at cultural sensitivity to come across as inauthentic and even insulting. For this reason, it is important to engage input from the business owners whose cultures you are trying to represent in your revised standards.

Keep in mind that simply allowing a broader and less traditional palette of colors can go a long way in bringing cultural representation to your district. Certain colors that are meaningful for specific cultures can help to attract a business’s target market even in when a language barrier exists. InformationIsBeautiful.net developed a graph of colorshttps://www.informationisbeautiful.net/visualizations/colours-in-cultures/ typically used by different countries or regions.

When considering a proposal from new business owners, if the design reviewers’ main objection is that it incorporates bright colors that won’t fit into the district, it may be worth examining from a different angle. The trick is allowing for freedom of color without letting it detract from the building or the district. The best way that many communities have found is to limit the brand color to the signage, awnings, window displays and trim, but leave the building itself as close to original as possible. This is a good strategy for almost any downtown business, regardless of culture. Many franchises with strict brand guidelines try to go as far as they can for brand recognition, sometimes wanting to paint the entire building their brand color. But if a community has good ordinances and design guidelines in place, it can strike the balance of allowing the brand to be visible in the details while the building as a whole still fits into the character of the district.

The “before” photo on the left shows a Mexican restaurant that used traditional colors of their culture on its storefront, but to such a degree that it ended up detracting from the building itself. The rendering on the right shows how rehabilitating the building back to its original storefront configuration still allows for the trim and even upper windows to use the same signature colors, while allowing the building to retain its original character.

In this regard, graphic design, branding and logo development are very important aspects of Main Street design. After all, a building facade, signage, awnings and window displays are a large part of business advertising. Ronnie Lipton, author of Designing Across Cultures, writes when a particular group is targeted in advertising, especially groups that have felt like outsiders for generations, it allows them to feel more integrated into U.S. culture—but it’s extremely important that their culture is represented authentically.

Chelsea Vaal, in her 2014 thesis at the University of Louisville, stated that designers must learn about the group’s culture, values, family structure and religious beliefs. For example, as noted earlier, no homogenous Hispanic culture exists, and although several characteristics are indeed common among multiple Hispanic traditions, it’s important to avoid stereotypes. Vaal argued that including stereotypes in designs not only alienates the intended audience, it also perpetuates those oversimplifications in society.

Communities seeking to incorporate cultural diversity must be prepared to look beneath the surface and embrace nuance. For example, Vaal’s thesis explored how one popular soda brand changed its marketing for the Hispanic market—and it probably wasn’t how you’d expect. From the original marketing campaign of “Zero Calories, No Artificial Sweeteners” (focusing on product quality), bolder colors and an altered tagline were used for the Hispanic market: “Happier and Healthier,” focusing on what the product would create for the consumer, their family and their community. (Notice that adapting the message for the Hispanic market did not involve translating the existing tagline into Spanish or incorporating stereotypical imagery.)

It is also important to realize that various cultural or ethnic groups are not just niche markets. In Wisconsin alone, estimates show that by the time of the 2020 census there will be 412,000 Hispanic Americans, 366,000 African Americans, 166,000 Asian Americans and 49,000 Native Americans. The Selig Center for Economic Growth found that in 2019, Hispanics alone accounted for 10.6% of buying power in the U.S. And according to the Pew Research Center, the Asian American population in the U.S. has increased considerably since 2000.

With these groups growing in numbers, consumer power and cultural importance, it is vitally important that businesses use storefronts and signage to connect with them in an authentic way, which can be done while maintaining the cohesion of the existing district. Colors, fonts and imagery can and should play an important role, no matter which culture the business represents or is trying to attract. But it does not have to be to the degree of the Chinatown or New Glarus examples, with large, oversized signage or faux Swiss chalet façades. Below are a series of storefronts from businesses of various cultures that are well designed—with each incorporating traditional colors, text and imagery—but not in a way that overwhelms the building. They are scaled proportionally with the building.

Left: A Black-owned tea shop in Washington, DC, uses bold colors inside and out without overdoing it. Right: A Black-owned children’s store uses colorful African imagery in its simple logo.

On the right and left are Chinese restaurants that were able to incorporate traditional colors and imagery without overwhelming the existing storefront. The Japanese restaurant in the center uses simple signage between the awnings that is subtle but very effective.

On the left is a Native American-owned business in Golden, CO, that uses natural wood elements and attractive window displays to attract attention. On the right is a storefront in Rapid City, SD, that uses a simple sign that evokes traditional Native American design without resorting to stereotypical imagery.

This Mexican grocery in Orange County, CA, uses bold, traditional colors very well in its interior without overdoing it.

The following example from Canada illustrates a subtle difference from the previous examples. Carlos & Pepe’s Taqueria in Montreal is located in a beautiful historic building. The decor, the signage and even the outdoor seating all blend perfectly with the building and would meet any reasonable design guidelines in any community. But while their logo is attractive and fits well on the building, they’ve used a common stereotype in their imagery (two men wearing sombreros), and the logo colors are not ones that hold value for many Hispanics. These design decisions indicate this business probably wasn’t intended for a Mexican clientele.

In closing, communities should reexamine their existing ordinances and guidelines to make sure that they allow for some freedom of culture and expression for businesses. This is especially important if your design review board tends to review proposals based on personal preferences. It is always important that review decisions are based on guidelines and are consistent. A few things to look for include:

With these tips, our communities can show that they value not just their history but all of their current members. The way we design our downtowns has the power to help residents from diverse cultures to feel welcome and included, which leads to communities that are more integrated and less divided.