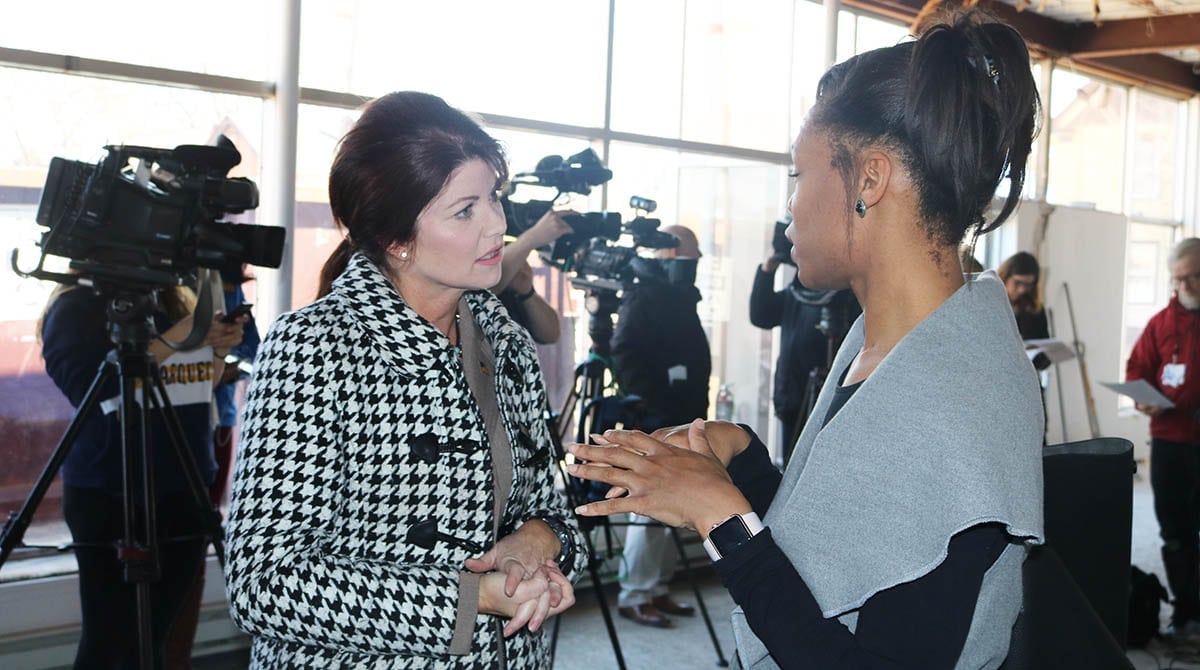 Take a walk up the rickety stairs of a vacant bank building on Milwaukee’s north side and you’ll immediately come across a large empty room that doesn’t look like much.

The ceiling tiles are gone, and wires and steel beams are exposed. What was once a kitchen area is now a cluttered mess with broken wooden cabinets. So much of the floor tile is damaged that you have watch your step as you navigate around the wide-open space.

However, just spend a few minutes with Joanna Brooks in that room and your perception of it suddenly changes. Brooks is a yoga instructor and that third-floor room in the former BMO Harris Bank building in the Sherman Park neighborhood will become her new studio in a few months.

And her eyes light up as she describes her vision for what’s to come.

With a smile on her face, she shows you the exact spot in the room where she plans to lead her classes. Then she walks over to the large windows and talks about what a great view her students will have as they stretch and bend during their routines.

“This is beyond my wildest dreams,” says Brooks, the owner of Embody Yoga. “I’ve always hoped to have my own brick-and-mortar yoga studio, and now that dream is actually becoming a reality.”

Brooks is one of 20 entrepreneurs who will realize their dreams when The Sherman Phoenix, a community-driven entrepreneurial and wellness hub, opens its doors this fall. Once completed, The Phoenix will house small businesses, most owned by people of color, that will offer prepared foods, wellness services, and arts and cultural activities. It also will have a food hall with an outdoor patio and gathering spaces to foster community building. The project is expected to create 75 new jobs for community members.

But The Phoenix is more than an incubator for startups. It’s also a symbol of hope for a neighborhood still recovering from a civil disturbance in the summer of 2016 in which the bank building was severely damaged by fire.

Co-developers Juli Kaufmann and JoAnne Sabir believe the project will not only give local entrepreneurs an affordable space to launch and grow their businesses, but will also play a key role in continued rebuilding of the neighborhood.

“Our goal is to build local wealth and circulate that wealth, so that we’re not only raising up businesses, they are raising up employees and together we’re creating paychecks,” Kaufmann explains. “The bottom line is that we’re circulating wealth in Sherman Park, and that wealth stays here.

“That is how we change the trajectory of this community and many like it, so that in all of Wisconsin and all of Milwaukee, communities like this can rise up,” she says. “That’s the story of The Sherman Phoenix.”

“It is a gift to be able to walk this journey with so many inspirational entrepreneurs who are bringing their products and services to The Sherman Phoenix,” adds Sabir. “Their brilliance breathes life into our shared vision for a greater Milwaukee for all of us, together.”

The Phoenix also will offer business support through mentorship, business coaching and networking to help entrepreneurs of color grow their businesses, generate jobs and support the local economy.

Redeveloping the 20,000-square-foot, 90-year-old bank building is a massive—and costly—undertaking, and thanks to support from both the public and private sectors, Sabir and Kaufmann have already raised more than $2.5 million for the project.  More than 100 people have contributed to the project through an online crowdfunding campaign, and The Phoenix has received a $250,000 grant from WEDC as well as $215,000 from the City of Milwaukee.

While organizers still hope to raise another $1 million for the project, those involved in The Phoenix have no doubt that it will make a real difference in Sherman Park.

“I’m incredibly optimistic about the project and the impact it will have on the community, simply because I have had the opportunity to speak not only to JoAnne and Juli about their vision, but also to the other entrepreneurs who are going to be taking up space here,” Brooks says.

“These are brilliant folks, great folks, who have a heart for the community and they really want to make an impact,” she adds. “They don’t just talk about their bottom line; they talk about how they want to help the people who live in this area and beyond. For that reason, I’m confident we will be successful.”

For more information about The Sherman Phoenix, visit www.shermanphoenix.com.