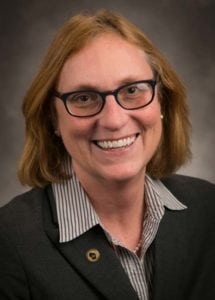 The council is a multi-state association that serves as a key resource for education, networking, and information sharing for economic development professionals and organizations in 12 states. The group’s focus is to provide its members states with the connections and resources needed to compete for national and international economic development projects.

“The Mid-America EDC provides economic development officials throughout the Midwest with a great platform to share ideas and resources to help grow the economy throughout the region,” Gage said. “I look forward to playing a leadership role in the organization.”

Twice a year, the Mid-America EDC holds conferences open to those inside and outside the Mid-America region, which encompasses Illinois, Indiana, Iowa, Kansas, Michigan, Minnesota, Nebraska, North Dakota, Ohio, South Dakota, Wisconsin, and Wyoming. The group’s Best Practices Conference will be held in May in Des Moines, Iowa, and the Competitiveness Conference and Site Selector Forum is scheduled for December in Chicago.

For more information about the Mid-America EDC, including membership and sponsorship opportunities, visit www.midamericaedc.org.