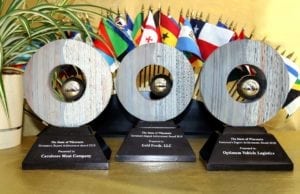 Since 1981, through the Governor’s Export Achievement Awards, the Governor of Wisconsin has recognized companies that have contributed to the state’s export growth by achieving extraordinary results in international markets while elevating Wisconsin’s competitiveness in the global economy.

This year’s awards, which were presented at the 54th Annual Wisconsin International Trade Conference in Milwaukee, honor businesses that have achieved significant growth or implemented innovative strategies in exporting. Nominees were evaluated on measurable export growth, innovation, contributions to the state’s overall economy, and trade development.

The following three Wisconsin companies were recognized with a 2018 Governor’s Export Achievement Award to highlight their growth in global business development.

Carnivore Meat Co.: Founded in 2012, Carnivore is one of the fastest-growth contenders globally in the pet food industry, specializing in the raw food category. The company’s flagship consumer brands, Vital Essentials and Vital Cat, make up the fourth-largest brand in this niche with frozen and freeze-dried entrees, treats and snacks for dogs and cats. The company, which began exporting in 2015, experienced a 54 percent increase in international sales from 2016 to 2017, and expects that to increase by more than 600 percent in 2018.

“We’ve been extremely blessed to have experienced such tremendous growth both domestically and internationally,” said Lanny Viegut, CEO and owner of Carnivore Meat Company. “We exceeded expectations last year and are making significant investments across the entire organization in anticipation of a 50 percent increase in our workforce, just to keep up to demand. We truly appreciate the recognition bestowed upon us with the Governor’s Export Achievement Award and the support we’ve received from the Wisconsin Economic Development Corporation.”

Gehl Foods: Founded more than a century ago in Milwaukee, Gehl Foods is an aseptic manufacturer that produces fresh-tasting, shelf-stable dairy products. The company has integrated business units covering the contract manufacturing, retail brands, private-label brands, food service, convenience store and entertainment segments for both the domestic and international markets. Among its products, cheese sauce and nutritional beverages are two of the fastest-developing worldwide categories. Gehl has seen a 55 percent increase in international sales since 2015, and exports its products to 19 countries as well as the 27-member European Union.

“It is a great honor to receive this award,” said Eric Beringause, CEO of Gehl Foods. “The building of our export business is a primary focus at Gehl Foods, and we have grown to sell our products in 46 countries worldwide through the efforts of our dedicated workforce and distributor network. Many thanks to our friends at WEDC, the Wisconsin Manufacturing Extension Partnership, the Madison International Trade Association and ExporTech for all their help and support.”

“We are honored to have been chosen for this distinguished award,” said OVL President Stephane Dermond. “I would like to thank WEDC for its continued support for helping us extend our reach to new markets by providing funding for some of our marketing efforts. “Awards of this nature are a direct result of extensive international travel. At times, it can be difficult to balance family life and growing a business. I would like to thank all my employees who contributed to the success of the company, as well as my family, who have supported me through the journey.”