From global corporations producing tons of cheese per day to small, family-owned operations selling cheese from their storefronts, Wisconsin’s cheese industry is not only part of the state’s heritage, but also an economic driver that supports thousands of jobs and pumps millions into the economy. 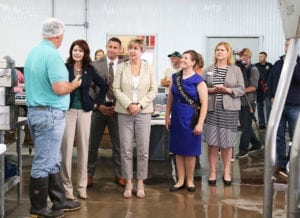 To recognize the importance of the industry, Governor Scott Walker, Lt. Governor Rebecca Kleefisch and more than 70 state and industry leaders visited 13 cheese producers around the state on the second annual Wisconsin Cheese Day on June 25.

“Wisconsin is America’s Dairyland—and since cheese is Wisconsin’s official dairy product, it is only fitting that we visit cheese producers throughout the state to thank them for the contributions they are making to their industry and the state’s economy,” said Governor Walker. “Wisconsin Cheese Day is about celebrating the successes of these companies as well as the family-supporting jobs they create right here in Wisconsin.”

The companies visited ranged from the Clock Shadow Creamery in Milwaukee, which is that city’s only cheese factory and is one of a handful of urban cheese processors in the country, to Schreiber Foods in Green Bay, the world’s largest employee-owned dairy company, with operations in 12 countries and more than 7,000 employees.

At each stop, state officials took a few minutes to thank company officials and their employees for their role in making Wisconsin a global leader in cheese.

How much of a leader is the Dairy State when it comes to cheese production? Here are a few quick facts: 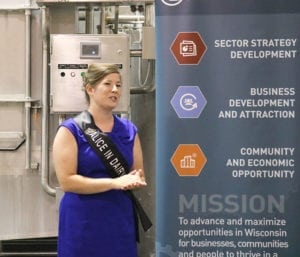 Kaitlyn Riley, Wisconsin’s Alice in Dairyland, thanks the owners and employees of the Eau Galle Cheese Factory in Pepin County for their role in the state’s dairy industry.

“Wisconsin’s cheese producers are not only creating award-winning products enjoyed by cheese lovers around the world, but making a major contribution to our state’s economy by creating jobs and purchasing milk from Wisconsin dairy farmers,” said WEDC Secretary and CEO Mark Hogan, one of four cabinet secretaries who took part in the tour.

This year, the State of Wisconsin teamed up with the Wisconsin Cheese Makers Association (WCMA), a nonprofit organization representing 98 cheese manufacturing, processing and marketing companies, to celebrate Wisconsin Cheese Day.

“Wisconsin’s rich history of cheesemaking is a key component to strengthening its economic future,” said John Umhoefer, WCMA executive director. “Wisconsin Cheese Day is a day to thank all those people—at the Capitol, in the classroom, in research and development labs, and right at the vat—whose work has given us great reason to celebrate.”