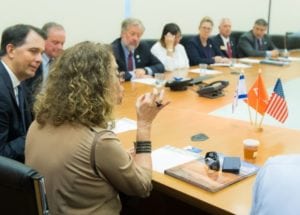 Governor Scott Walker, Wisconsin Economic Development Corporation Secretary and CEO Mark R. Hogan, and the rest of the 16-member Wisconsin delegation are returning to Wisconsin Thursday after a successful trade mission to Israel that focused on developing new partnerships in the water technology sector.

On the trade mission’s final full day, The Water Council signed two agreements that will increase collaboration and establish new partnerships between Wisconsin and Israel.

The Water Council and the Zuckerberg Institute for Water Research at Ben-Gurion University of the Negev signed an agreement that calls for collaboration on water-related applied research aimed at introducing new technologies into the global marketplace through Wisconsin’s National Science Foundation sponsored Industry/University Cooperative Research Center (I/UCRC) for Water Equipment and Policy (WEP).

The Water Council and the Israel Innovation Authority also signed an agreement to develop a new research partnership in which Israeli and Wisconsin water technology startups will collaborate on piloting and developing new applications for the Milwaukee Metropolitan Sewerage District (MMSD) and other Wisconsin water utilities.

The agreements were signed in separate ceremonies in Tel Aviv and at Ben-Gurion University in Beer-Sheva on Thursday.

“These agreements will further enhance Wisconsin’s international reputation as a global leader in water technology by forging new partnerships that will pay dividends in the long run,” said Governor Walker. “These partnerships will strengthen the sector in both countries, and are expected to open new markets to water technology companies in Wisconsin and Israel.”

“For the past year The Water Council has laid the groundwork for the development of these vitally important agreements, which will result in bringing together our two world water technology hubs,” said Dean Amhaus, president and CEO of The Water Council. “The partnership with Ben-Gurion University lays the foundation for creating the first I/UCRC presence for the National Science Foundation in Israel and fosters greater business and academic collaboration.  The agreement with the Israel Innovation Authority offers tangible support for Israeli businesses seeking to conduct pilots with Wisconsin water utilities.”

Wisconsin’s leadership role in water technology also was the focus of an “Opportunity in Wisconsin” networking event held Wednesday in Tel Aviv for Israeli companies interested in establishing or expanding operations in the U.S. Governor Walker and Secretary Hogan provided attendees with information on opportunities to expand their businesses in Wisconsin and the benefits of investing in the state. At the event, hosted by SelectUSA, Amhaus gave a presentation on Wisconsin’s global leadership role in the water technology sector.