The challenges facing the world’s water supply—growing populations, changing weather conditions, threats to water supply quality and safety—are global in nature, and the solutions will need to have a similarly global perspective. Recognizing this, Milwaukee’s water hub has forged global connections to take an active role in crafting these solutions—and is continuing to strengthen these ties with each passing year.

The Water Council currently has 17 international agreements in place, and was also one of the founding members of the Global Water Tech Hub Alliance, an organization founded in 2018 in conjunction with partners in the Netherlands, Israel, Singapore, China and South Korea.

These international ties were highlighted in several sessions this week at WEFTEC—the Water Environment Federation’s Technical Exhibition and Conference—an annual event (held in Chicago this year) that draws water technology leaders and innovators from around the world together in one place. 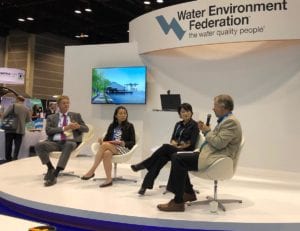 In a panel discussion at WEFTEC 2019, Hein Molenkamp of the Water Alliance, Sok Gek Ang of PUB (Singapore’s national water agency), Jacee Yoon-Jeong Choi of the South Korea water cluster and Dean Amhaus of The Water Council spoke about “Global Collaboration through Innovation.”

On a panel that featured the water clusters from Milwaukee, Cleveland and San Diego, Dean Amhaus, president and CEO of The Water Council, said he envisions the organization as operating similarly to “the match.com of the water sector,” connecting entrepreneurs and researchers with existing companies looking for new technologies.

Interest in such collaboration seems widespread: The panel included a few minutes for introductions not just by the panelists but by those in the audience, which included attendees from Brazil, El Salvador, Peru, Mexico, India, Myanmar, Singapore, Kuwait, Saudi Arabia, Morocco and South Africa.

Amhaus noted that over the last few years there has been a sea change in the corporate world, as companies realize water stewardship makes sense from both a financial and a corporate social responsibility perspective. Rather than having to approach companies and persuade them to care about this, Amhaus said, “now the companies are calling us.”

In a panel that featured the water clusters from Wisconsin, the Netherlands and the Catalonia region of Spain, panelists noted that in each case, geography led to a concern for water issues long before awareness of these issues began to reach the general public.

“From the beginning, we’ve had to deal with water scarcity and water quality” in Catalonia, said Miquel Rovira of the Catalan Water Partnership. The Netherlands has a similar history of water issues being front and center; in Milwaukee’s case, a geographic location where rivers emptied into Lake Michigan made it a perfect location for water-intensive industries—and to become one of the leading U.S. cities working on water quality, safety and stewardship issues.

Beverley Ferrara, The Water Council’s representative in Europe, said it’s encouraging how much interest there is in water issues now, and fortunate that the newer clusters can model their efforts after the clusters that paved the way.

“Water clusters are popping up everywhere now,” she said. “When we started 10 years ago, we didn’t have a template.”

Hein Molenkamp, managing director of the Netherlands-based Water Alliance, noted the rapid pace of innovation currently taking place in water technology. The way we think about water and the environment is going to change drastically over the course of a generation, he said. Even now, inventions that sound ridiculous—such as toilets that generate hydroelectric power or remove prescription drug molecules from wastewater—are not far away from becoming possible with technologies that currently exist.

Considering the scarcity of clean water, “The fact that we flush our toilets with clean drinking water is ridiculous,” said Molenkamp, “but still, today we do it. That’s all going to change.”

Sinnott said most startups are not export-ready, but can still benefit from making connections in new markets that will help them understand what they need to do to begin exporting.

Molenkamp noted that within Europe especially, “each country is a totally different market,” and that international connections among clusters can help a given cluster know which partners to refer its local companies to, based on where in the world their products will have the best chance of success.

Some new connections will undoubtedly be forged this week, as The Water Council welcomes 30 WEFTEC attendees from various parts of Europe to Milwaukee to learn about Wisconsin’s water cluster and foreign direct investment prospects—precisely the type of introduction Ferrara helps to coordinate.

“My role is to encourage companies to come to Wisconsin because we are set up to help them grow,” she said.

A third panel featured a relatively new water cluster—from South Korea—along with Amhaus from Wisconsin, Molenkamp from the Netherlands and a representative of Singapore’s water cluster.

Like Wisconsin and the Netherlands, Singapore has been driven to focus on water by necessity, under pressure of population growth, climate change, an aging population and a small land area, said Sok Gek Ang, senior manager for industry and technology collaboration with PUB, Singapore’s national water agency.

In South Korea, the water cluster is newly established and still largely driven by the national government, said Jacee Yoon-Jeong Choi, deputy manager of the South Korea water cluster organization. It is being modeled on other successful water clusters, including those in Wisconsin and the Netherlands, said Choi.

In each case, the cluster helps to identify unmet demand in the market, and then identify companies—locally or globally—that might be able to met that demand.

“Each of us is interested in finding needs in the market,” said Molenkamp.

In South Korea, Choi said, the water cluster organization offers a research and development department to conduct this work for companies, since many companies don’t have the resources to carry out these activities on their own.

Getting connected with a water cluster organization can also help young companies find the right customers—a crucial decision since it informs the product’s continued development. “In water technology, your product is never ready,” Molenkamp said. “You do a lot of design and development on the go,” and it’s important to find a customer who understands that and will work with you through new iterations of the product.

Amhaus noted that one thing all four clusters have in common is a physical space—and that this has its own benefits. He said something as simple as a communal kitchen space creates the opportunity for conversations that lead to new insights and collaboration.

The most fruitful conversations aren’t always the ones that are organized or planned, said Amhaus. “I see the innovation process as more of an art than a science,” he said. “It gets messy. It should be messy.”

The Water Council also supports a global view of water issues through its role as the official North America partner of the Alliance for Water Stewardship (AWS). The AWS Standard is a certification available worldwide that recognizes companies that follow best practices for water stewardship—both when it comes to the water they take in and the fluids they dispose of at the end of their production processes.

AWS North America recently held a launch event in Mexico City. While the organization technically covered Mexico all along, it will now have dedicated staff and resources to assist businesses that are interested in pursuing the AWS Standard and the service providers that help them get there.