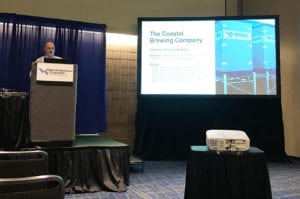 With this trend come water-related challenges. Craft breweries are by definition smaller and do not have the sophisticated wastewater treatment systems larger brewing companies typically have (and are required by law to have due to the amount of water they discharge).

Yet, the average craft brewer discharges more than 80 percent of the water it uses into the local municipal wastewater treatment system—and together, all these discharges from craft breweries add up to a large amount of water, said Steven Gluck, a technical advisor to BioGill in North America.

These discharges put a strain on local wastewater treatment plants and cut into their capacity to treat residential wastewater, Gluck said—and in some cases tensions have arisen between local governments and craft breweries, as the breweries that should be boosting the local economy are sometimes threatened with being forced to shut down as they lack the proper treatment systems for their wastewater.

BioGill, an Australian company whose North America office is within the Global Water Center in Milwaukee, has a solution designed to resolve these tensions and allow craft brewers to be good neighbors in their communities. The company’s system for treating wastewater on a smaller scale, similar to what comes from a craft brewery, was selected as the topic of a technical session at the Water Environment Federation’s Technical Exhibition and Conference (WEFTEC) last week in New Orleans. BioGill was one of several Water Council member companies whose work was showcased in the sessions.

The company’s above-ground, non-submerged bioreactors are designed to process wastewater with high chemical oxygen demand (COD) and biochemical oxygen demand (BOD) such as the water left over from beer brewing. The units contain patented “gills” made of ceramic. As water flows over the gills, biomass forms and natural air convection provides the oxygen needed for aerobic treatment.

At pilot sites in New Hampshire and Australia, BioGill’s technology proved highly effective at BOD and COD removal, and required less than 10 minutes of operator attention per day.