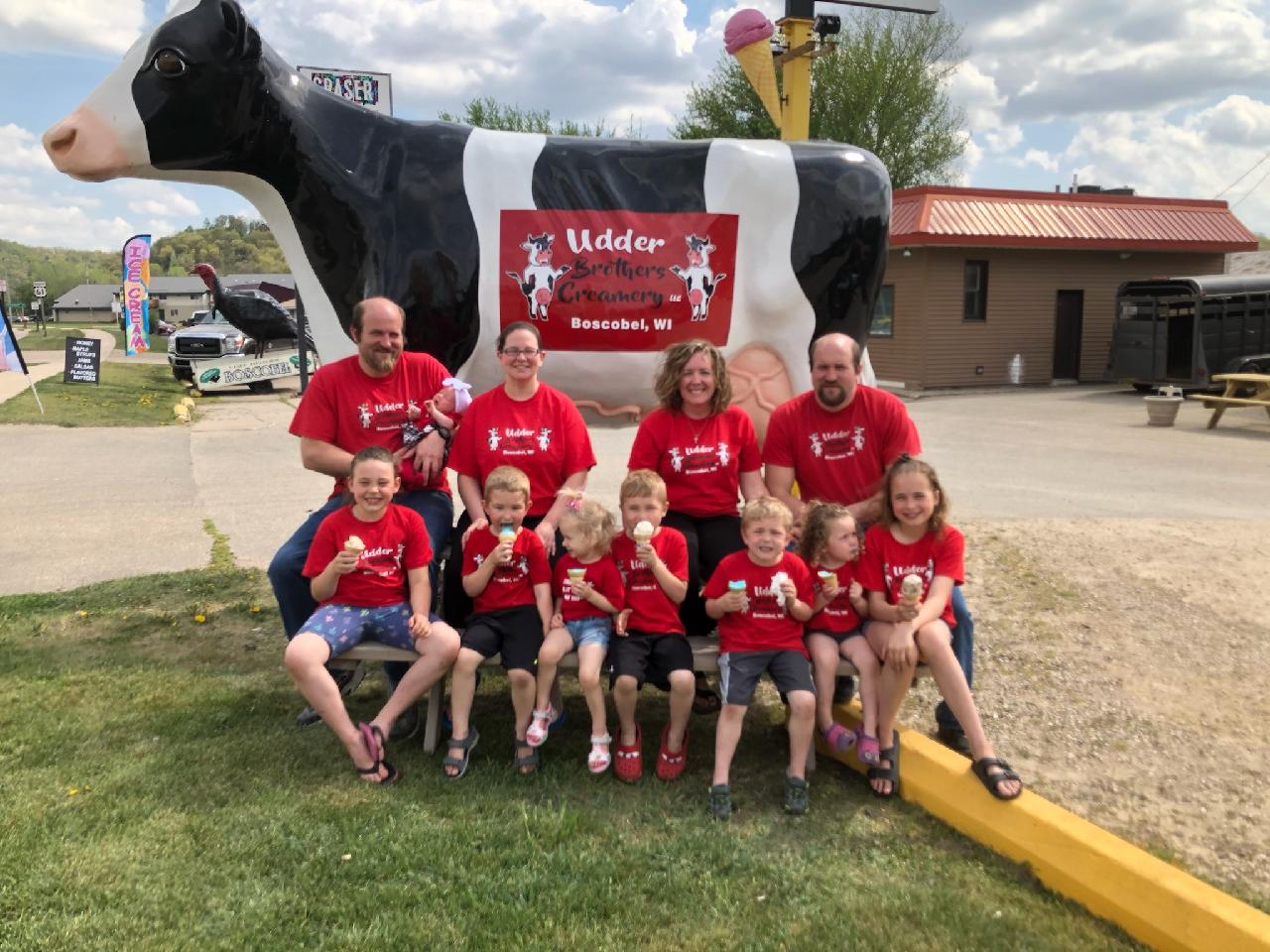 BOSCOBEL, WI. JUNE 21, 2021 – There was no question what twin brothers Jason and Justin Sparrgrove wanted to be when they grew up. The question was how they could financially make their dream of owning a dairy farm work.

By tapping into their entrepreneurial spirit, the Sparrgroves have managed to grow their 40-acre dairy farm in the town of Woodman to 130 milking cows while at the same time developing a successful ice cream shop and growing their families.

”You’ve got to do something different to make yourself stand out a bit,” said Justin Sparrgrove, as he discussed how the family settled on calling their business Udder Brothers’ Creamery. “The milk check just isn’t enough.”

“Farmers have a lot of entrepreneurial spirit and certainly know how to take risks and make smart investments,” Hughes said. “What’s exciting about the Udder Brothers’ Creamery is that the Sparrgrove families have really made it a showcase for farm products throughout the region and that they turned to small business ownership to diversify their income and keep the family farm running.”

Agriculture is a key part of Wisconsin’s economy accounting for about $104.8 billion annually, according to the latest statistics from the state Department of Agriculture, Trade and Consumer Protection. Farming and food processing are responsible for about 435,700 jobs in the state.

Though the brothers grew up around agriculture, their parents had to sell the family dairy farm when the twins were in high school. The Sparrgroves started their farm by purchasing 42 milk cows and renting space in the barn of a family friend. In 2010, they were able to purchase their farm in the town of Woodman.

“Dairy farming is very up in the air, very roller coaster,” Jason Sparrgrove said. “Either we were going to get out of milking or we had to figure something else out.”

That something else became Boscobel’s Udder Brothers’ Creamery run by the brothers and their families with the help of eight teen employees. In addition to 24 flavors of ice cream, made by one of the processors that handle the farm’s milk, the store sells pork raised on the farm and products including lamb, beef, poultry and more raised nearby. The brothers are also selling their own line of Cheddar cheeses made for them with milk from their herd.

The hope now is to raise the money needed to begin processing their own milk into ice cream and cheese, a goal the brothers say they hope to reach within the next five years.

Both brothers left Wisconsin after high school – Justin to attend college and Jason to join the U.S. Navy as a Seabee. But they both wanted to return to the state to farm and to raise a family.

“We want to raise our kids the way we were raised,” Jason Sparrgrove said, noting that each brother now is father to four kids. The eight cousins enjoy running around the farm where both families live, feeding baby lambs together and exploring.

Wisconsin’s rural communities have long suffered from a brain drain where young people move away to seek higher education or better job opportunities, West said. One of the key jobs of the Office of Rural Prosperity is to create and find supports that will allow young people and families to build their lives in rural Wisconsin.

“The Sparrgrove families are a wonderful example of the energy and talent that young families bring to rural communities,” West said. “We need to encourage more young people to stay and grow opportunities for themselves and others.”