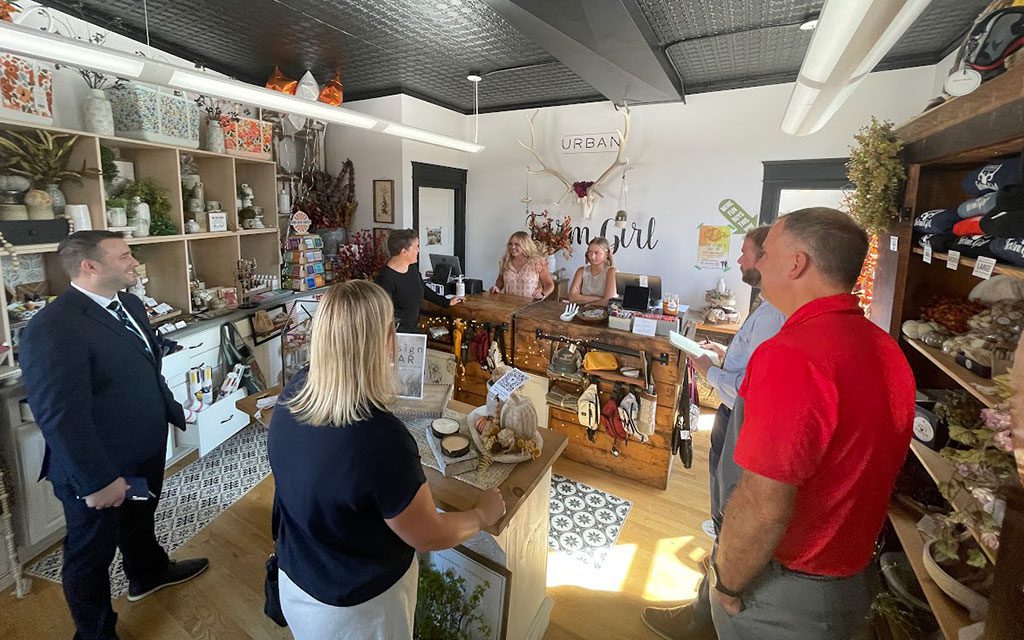 “Local businesses are a key part of economic development,” said WEDC Secretary and CEO Missy Hughes, who visited West Bend Thursday to tour some of the bounceback businesses. “These grants are making it possible for Wisconsin’s entrepreneurs to expand into new storefronts and bring new life to our communities.”

Governor Tony Evers announced the Main Street Bounceback grant program in the spring of 2021 with the first grants made in August, 2021, using $75 million in federal American Rescue Plan Act funds. The goal was to keep communities vital by helping fill vacant storefronts with new businesses and nonprofits.

In West Bend – where at least 53 grants had been awarded by Aug. 7–  and in communities across the state, the program has worked.

“The Bounceback Grant has been an excellent tool to help spur economic development throughout West Bend and specifically in the downtown,” said Jay Shambeau, West Bend city administrator. “This program has infused more than $500,000 into our local economy.”

The city has been actively investing in its historic downtown, Shambeau said. Earlier this year, West Bend received a $2.65 million Neighborhood Investment Fund Grant to redevelop its Riverwalk. Two multifamily housing developments totaling 300 units are coming online and a new TownePlace Suites by Marriott recently opened — welcoming thousands of new residents and visitors to the downtown historic and cultural district.

“The entire list of grant recipients is comprised of local entrepreneurs who had an idea or always wanted a store of their own in West Bend — they now have one,” Shambeau said. “Thank you to Governor Evers, WEDC, and Milwaukee 7 for developing this grant program. Also, thanks to our team for being proactive and assisting businesses obtain the funding.”

Sheila Kruepke wanted to turn her longtime passion for home décor and design into a store in August 2021, but with the COVID-19 pandemic continuing, she questioned if it was a good time to open a business. The Main Street Bounceback program enabled Kruepke to open the Urban Farm Girl, Urban Farm Girl, a boutique selling unique furniture, art and other home goods.

“It was an empty building, it was a beautiful building and I knew if I didn’t snatch it up right then and there, I might not get the opportunity again,” Kruepke said. “The rent is a little higher in downtown West Bend, so this grant has definitely helped. West Bend is pretty lucky to have the bounceback program.”

Longtime Lego fanatic and West Bend native Zach Zuleger discovered the potential in reselling Lego products when he parted with his prized childhood possessions to help pay for college. While in college, Zuleger opened a successful online store for Wapi Bricks and gained an impressive TikTok following.

For 33 years, Ray Carlson’s shoe repair business was located in a former brewery building in downtown West Bend. The cobbler had to relocate in 2021 to make way for a housing development. The transition involved moving heavy machinery and, more notably, making customers aware that he had relocated, not closed.

“Nobody knew where I was — they didn’t know if I had reopened or not,” Carlson said. “The grant helped us have this new space and keep the business going. It was a lot of help.”

In March 2021, after 6-year-old West Bend Tap + Tavern closed at 315 N. Main Street, Gordon Goggin and his wife, Tricia Dooley, opened Dooley’s on Main. Named after Dooley’s father, the casual, family-friendly restaurant serves lunch and dinner seven days a week as well as brunch on weekends. Opening Dooley’s on Main, as well as hiring and retaining the staff, has been a costly proposition made easier by the Main Street Bounceback grant, Goggin said.

“Right now we employ about 45-50 people, which is a fair number of people to keep working,” Goggin said. “The grant definitely helps us do that.”