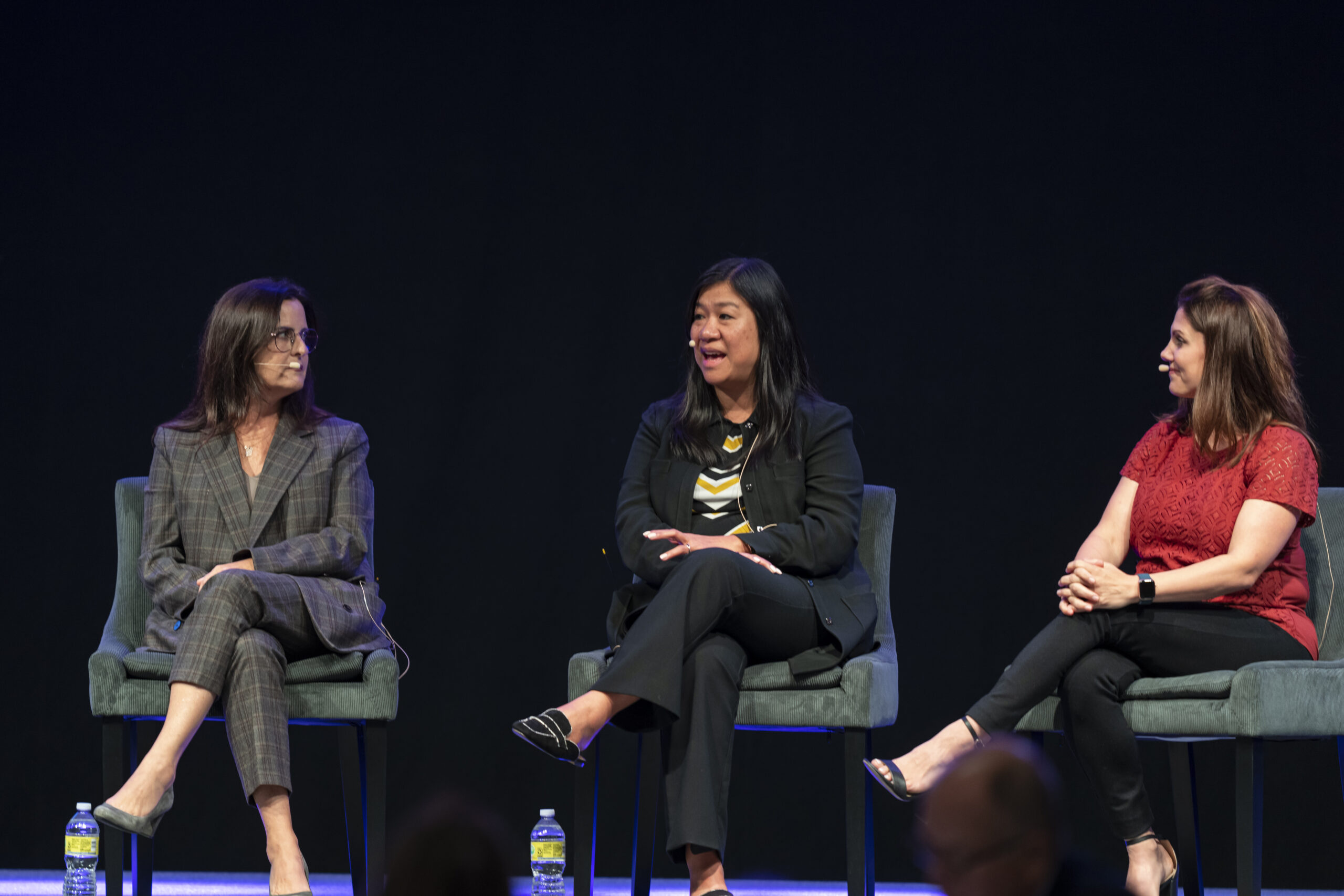 Wisconsin businesses persevered through the pandemic and the hardships it brought. From left, Michelle Tressler, Tina Chang and Rachel Neill discuss how their businesses survived.

The resilience of Wisconsin businesses was never more apparent than during the disruptive, unpredictable height of the COVID-19 pandemic.

Although the pandemic’s effects scuttled some businesses and robbed many workers of their jobs, many of the survivors showed a remarkable ability to persist and went on to even greater heights.

At the Wisconsin Economic Summit in Appleton in mid-September, businesspeople talked about the struggles and benefits of leading their enterprises through the crisis.

Tina Chang, chairwoman and CEO of SysLogic Inc., a Brookfield-based technology services company, said three of the company’s clients had backed out on $700,000 in committed contracts in the early stages of the pandemic.

“That is a scary place to be. Luckily for us, PPP [the federal Paycheck Protection Program] came around before we actually knew what it was. Bankers were my best friends,” Chang said. “If you didn’t have a relationship with a bank, you had to create one. It really helped a lot of us just breathe a huge sigh of relief.”

“We not only recovered what we lost, but we got right back into our growth plans,” she said.

Through it all, the nature of the workplace also changed to embrace remote work. Chang said that although SysLogic is hiring, many of its new employees do not live in Wisconsin. In fact, nine of her last ten hires live out of state.

“That’s going to be a major issue as we think about trying to build the economy with employees here, as tech continues to grow and talent becomes scarce,” she said.

Of course, one of the sectors that was hardest hit during pandemic was food service. Michelle Tressler, co-founder and chief strategy officer for Hinterland Brewery, which operates a brewery and restaurant in Green Bay’s Titletown District, said her 130-employee operation came to a grinding halt.

“We not only lost our entire retail business for several weeks, but our wholesale business was drawn down dramatically,” she said. “When we came back, it was to a very scary environment.”

Some Hinterland employees wanted to return, and others refused. So Tressler and her husband, Bill, tried to figure out how to reopen in a safe way that made everyone comfortable. She spent hours in Zoom calls with restaurant groups and advocacy organizations that pointed the way to best practices.

The pandemic forced a rethinking of the hospitality industry, Tressler said. While customer satisfaction is important, she said, it’s not the only focus.

“We used to think the customer was always right, and we don’t always think that anymore,” she said. “We’re a family and a team and we’ve got our team’s back. We need to figure out what works well for us—and it might not be for everyone. It’s really allowed us to define our culture.”

Hinterland saw a return to pre-pandemic sales levels in 2021, and today the brewery is back to logging record sales. “The pandemic allowed us to build trust in our community,” she added.

The pandemic forced Rachel Neill, founder of Carex Consulting Group, to retreat to her home, with six kids. There, she came up with a company called Figgy Play, which sells couches and cushions for creative play.

In its first year, Figgy Play generated more than $1 million in revenue. But there were challenges. Foam, used in making the cushions, was also a component of personal protective gear, and the company was forced to look to China to have it manufactured. Then, shipping costs soared from $3,000 to $18,000 per freight container.

“We had to spend money sometimes six to eight months in advance, before we actually realized that revenue,” Neill said, adding that WEDC was able to provide funding to help propel the company forward.

Figgy Play adapted to the new workplace expectations, landing talented employees who were also tending kids at home during the crisis.