A&A Transportation breaks down barriers in the trucking industry

A&A Transportation breaks down barriers in the trucking industry 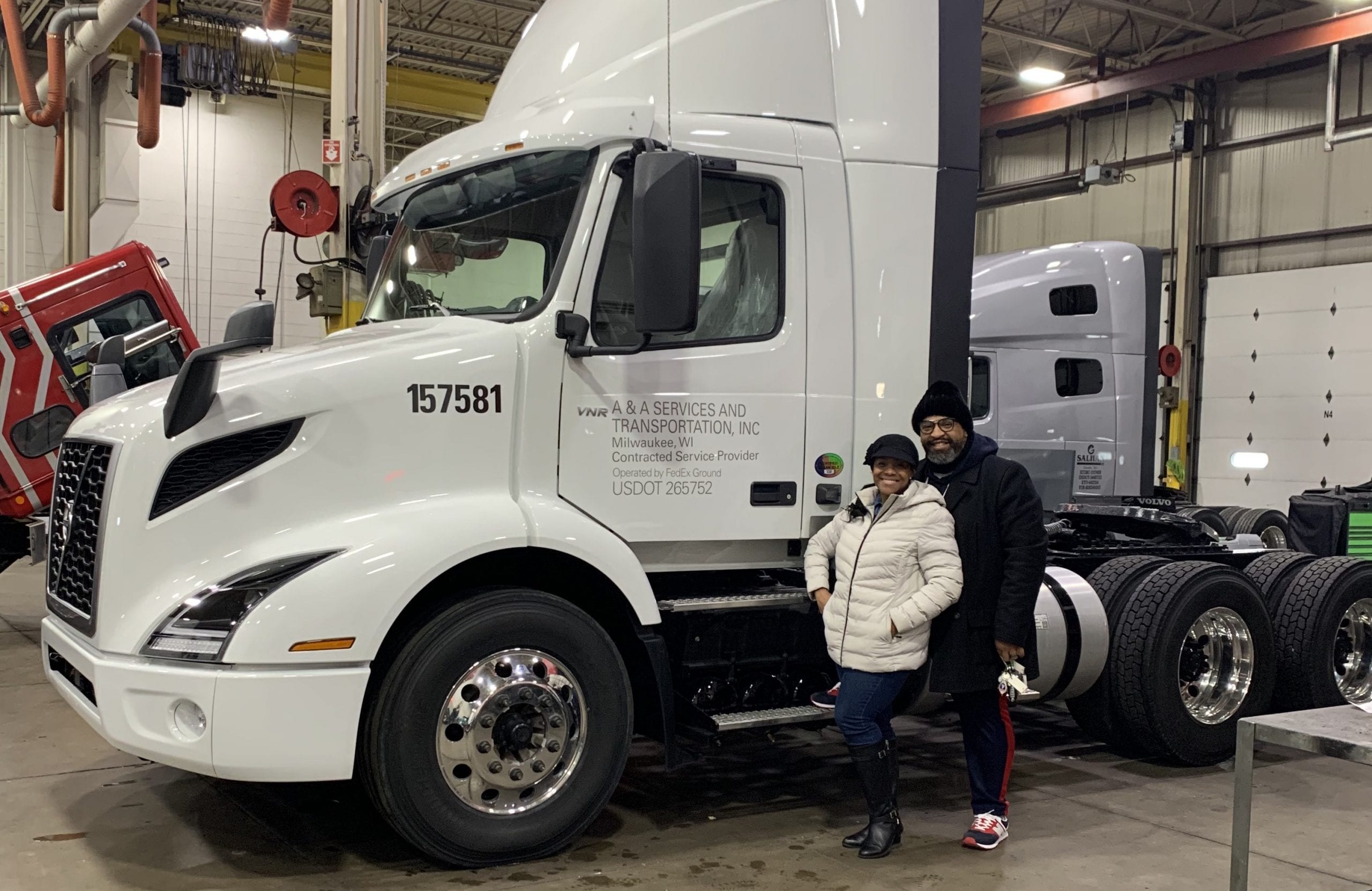 A family-owned trucking company that got its big break thanks to the COVID-19 pandemic is growing by focusing on creating generational wealth for Milwaukee’s Black community.

A&A is a subcontractor working primarily for FedEx. The company works on three separate routes running three Sprinter vans on a package pickup and delivery route in the West Allis area and two “line haul” routes with two semi trucks each carrying a double trailer, running from Illinois to the Milwaukee area.

“We’re able to offer job sustainability for anyone,” Robbins says, explaining that they’d like to be able to take on more employees as the company grows. He adds that he and his wife want to offer opportunities for people who may have struggled to find employment in other industries. “Just because a person does not have a four-year degree doesn’t mean they’re not a quality person.”

The Robbins family knows a few things about entrepreneurship.

As the family gathered around the Thanksgiving table in 2019, talk turned to starting another business.

“We also started talking about what’s resistant and recession-proof and we came to logistics, trucking,” says Laci Robbins.

That was the beginning of A&A. From the very start, it was meant to be a family effort. The company was named for Aaron Robbins’ two oldest children, Ariana, 16, and A.J., 15.

As the Robbinses began their business, they relied on help from Milwaukee’s Northwest Side Community Development Corporation (CDC). WEDC provided the Northwest Side CDC with a $500,000 Capacity Building Grant in 2019 to help build a revolving loan fund, and has also assisted the group with a $60,000 Entrepreneurship Support Grant this year.

In May 2020, the Robbins family incorporated A&A Transportation. Northwest Side CDC staff worked with the family as they developed a business plan and projections. As the couple began trying to win a contract from FedEx, the Northwest Side CDC offered a letter committing to financing A&A if the new business won a contract.

The negotiations with FedEx took months, and in the end, the new trucking company wasn’t chosen.

But Northwest Side CDC Executive Director Willie Smith says he was still proud of the proposal they put forward, and the skills and capabilities they developed that would come in handy for future proposals. “The Robbinses did their homework on the transportation industry,” he says. “Within a very short time they spoke about the industry as if they had years of experience. “

As the holidays neared last year, the delivery industry was getting a peek at what the U.S. Postal Service called a “historic record of mail and package volume,” and A&A got a second chance.

“They assessed their weak areas, worked to strengthen them and moved on to the next goal to reach their destination,” says Renata Bunger, the Northwest Side CDC’s business development director, who worked with the couple. “It does not intimidate them to go after new business ideas because they understand the financial benefits are not just personal enrichment but more jobs and higher quality of life in the African American community.”

So the family took $10,000 from their savings account to lease the vans, get the contract and then secure financing. The Northwest Side CDC provided them with a $56,000 loan.

Their experience highlights the challenges many entry-level entrepreneurs face, especially people of color.

“There’s a barrier of entry because of cash flow,” Laci Robbins says. “Not everybody is able to do that. If we weren’t able to take the money out of savings, we would have lost the contract.”

The Northwest Side CDC’s revolving loan fund, started with the WEDC grant funding, is designed to help businesses that might not be able to get traditional bank financing.

“The Northwest Side CDC loan was critical to their securing the FedEx contract,” Bunger says. “There are few opportunities for a startup to secure a loan to win a large company contract.”

“It was the best feeling to have our guys in the trucks,” says Laci Robbins.

For the Robbins family, A&A is more than a business.

“It’s about creating a legacy for our children and jobs for our community,” Laci Robbins says. “Everything’s a ministry for us.”

She says she’s particularly proud of the diversity on her team. Her line haul driver is a Black woman, a rarity in the trucking business. According to the U.S. Census Bureau’s 2017 American Community Survey, just 6.9% of drivers/sales workers and truck drivers were woman and only 15% were Black.

“Trucking is very white,” says Laci Robbins, who tells the story of when she and her driver—both Black women—went to the dealership to pick up the company’s semitruck. “They looked at us like, ‘What are you all doing here?’”

But she explained they were there to pick up their new truck and her driver was there to inspect it first.

Laci Robbins says she’s hopeful more people of color are able to get into the trucking business.

For the business to succeed, Aaron Robbins says the couple will need to develop a recruiting base in the community and devote resources to training so workers can continue to grow in their jobs, earn more and build financial security.

Creating generational wealth is something he often hears about as an active member of Milwaukee’s Black community.

“The thing about that is people oftentimes need a model,” he says. “Many times in the African American community, we’re told opportunity is available. But it’s not opportunity if I don’t have the resources.”