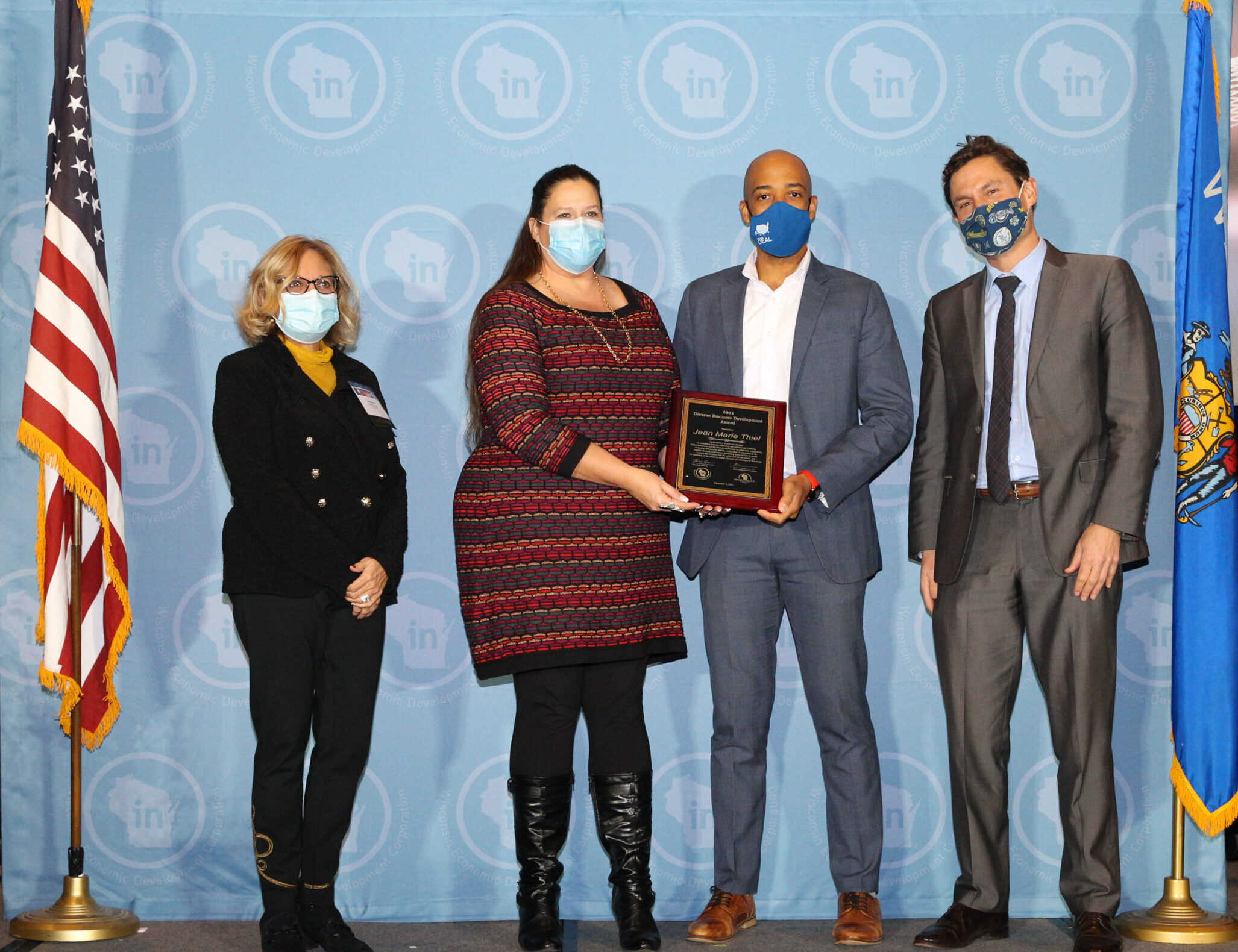 Nearly 800 business leaders from across Wisconsin paid tribute to the past and looked ahead to the future as the state’s premier conference on business diversity marked a major milestone.

MARKETPLACE 2021: The Governor’s Conference on Diverse Business Development, presented by WEDC, celebrated 40 years of connecting Wisconsin companies with potential partners in government and the private sector. With the continuing pandemic impacting public gatherings, the program featured a hybrid of workshops, held virtually, and in-person meetings and events staged at the Wisconsin Center in Milwaukee, Dec. 7-9.

At a fireside chat and catered luncheon for more than 400 people, MARKETPLACE cofounder Bill Beckett recalled the first gathering in 1981. An event limited in size and scope, it paired about 20 minority business leaders with state government purchasing agents, meeting one-on-one in hotel rooms where they snacked on coffee and doughnuts.

Forty years ago, officials did not know which businesses were minority-owned. They scoured the state to find them and compiled a directory. Soon after, the Legislature established a minority business development fund. In the 15 years the fund existed—before it was folded into other programs—it provided $10 million in loans to minority businesses, which attracted another $70 million from other sources.

“We need to make sure we’re thinking about … how can we make all of our businesses in Wisconsin as successful as possible?” Missy Hughes, WEDC secretary and CEO, told a panel discussion.

The state’s large corporations can lead the way by forming a network of diverse suppliers and mentoring them, said Danielle Bly, vice president of supplier diversity at Milwaukee-based WEC Energy Group. “In all we went through as a society with social unrest last year, so many companies around the U.S. made statements toward supplier diversity and DEI [diversity, equity and inclusion]. How do we maintain that momentum?” Bly said.

Wisconsin’s diverse entrepreneurs can get a toehold in the economy by plugging holes in the lagging supply chain, several speakers told the conference. Flexibility is essential for both large corporations and their suppliers as they work to respond to demands that may change rapidly in situations such as the ongoing pandemic, said Chris Bilton, manager of supplier diversity at Kohler Co., the global plumbing and power supply company. That’s where Wisconsin’s small businesses could grab an advantage, if they can step in and solve a big company’s problems, he said.

Startups launched at Wisconsin’s universities also can play a role, said Jenny Alexander, director of purchasing at Marquette University, in Milwaukee. “We’re really trying to target: What skills do these businesses need? And hopefully, we can supply the students who can fill those needs,” she said.

Robert Wynn, MARKETPLACE cofounder and president of CLIMB USA, a Milwaukee financial education nonprofit, also emphasized the potential role of young entrepreneurs. “There’s an opportunity to accelerate and elevate—if we can get our younger people to think and live in an economic way,” Wynn said.

Longtime attendees of the annual MARKETPLACE conference said meeting other business leaders from around Wisconsin and hearing their advice has helped them to make smart decisions.

Minoo Seifoddini, president and owner of Custom Service Plastics, a plastics injection molding company in Lake Geneva, has come to the conference for more than 20 years. “When you start your business, you don’t know what to do … At MARKETPLACE, you go and talk to people and learn from their experience,” she said. “There are lots of role models here – it’s unbelievable – and they can tell us what to do when we do not know.”

Jean Marie Thiel, president and CEO of West Bend-based Belonger Corp., the only woman- and American Indian-owned  mechanical contracting firm in Wisconsin, began attending MARKETPLACE at the same time. She and Seifoddini met when they sat down next to each other, that first year. Building a business comes from “baptism by fire, faith, resilience and not giving up,” Thiel said. Describing herself as an introvert on a personal level, Thiel said coming to MARKETPLACE has pushed her to become an extrovert in business. “It’s where I challenge myself to be a better entrepreneur and a better leader,” she said.

In a message to conference participants, Governor Tony Evers said with economic inequality exacerbated by the pandemic, programs such as MARKETPLACE aim to help reduce those disparities. “Wisconsin’s future lies in our ability to ensure that some of our hardest-hit communities have a fighting chance to rebound and recover while ensuring our state can move forward and build a more prosperous, equitable future. MARKETPLACE is one of the important ways our state can do just that by assisting diverse businesses and celebrating their successes,” Evers said.

Nearly 800 people registered to attend MARKETPLACE 2021. There were 79 exhibitors and 416 one-on-one meetings facilitated by the event.

Each year, MARKETPLACE honors large, small, “rising star,” and “legacy” businesses for outstanding leadership, and presents individual awards as well. In addition, community and business leaders are recognized for the support they extend to diverse businesses.