Putting a fresh face on manufacturing

Putting a fresh face on manufacturing

Wisconsin manufacturers are trying all sorts of tactics to bring new employees into their factories—and to entice them to stick around.

Companies are reaching out to students in high school, adding on-site training programs, mounting billboard and video campaigns and banding together in collaborative projects. Failure to solve the manufacturing industry’s workforce challenges has the potential to harm the competitiveness not only of individual companies but of the Wisconsin economy.

Surveys provide a vivid illustration of the challenges. For example, the annual Northeast Wisconsin Manufacturing Vitality Index showed more than half of the region’s manufacturers had planned to hire during the first half of 2022, while nearly two-thirds (65.5%) anticipated adding staff during the second half of this year. But 91% said they expected to have a tough time recruiting employees with the skills they need—the highest percentage of employers that voiced hiring concerns in the 12 years the NorthEast Wisconsin Manufacturing Alliance (NEWMA) has commissioned the survey.

The magnitude of the response is not surprising, but it is troubling, says NEWMA co-founder Ann Franz. “When you’re driving, you see ‘Help Wanted’ signs everywhere,” she notes.

Joe Brown, senior consultant with WMEP Manufacturing Solutions, says employers will have to be innovative if they want to continue to succeed. “There is no silver bullet,” Brown told a session at the organization’s Manufacturing Matters! Conference in Milwaukee in April.

State and local partners come together to address workforce challenges

Recognizing the difficulties employers face, the state and WEDC are investing aggressively to help solve Wisconsin’s workforce challenges. Over the last year, the state has committed more than $150 million in support for workforce solutions, including:

The skills gap has been a concern for years, as older factory workers have been retiring. Then, the COVID-19 pandemic eliminated more than 1.4 million manufacturing positions in the U.S., according to a 2021 study by Deloitte and the Manufacturing Institute (MI). While nearly 60% of those jobs were restored and filled by the end of 2020, serious problems remain, the study says:

The gap could swell to 2.1 million open manufacturing jobs by 2030.

If that happens, it could cost the U.S. economy up to $1 trillion.

Meanwhile, even as manufacturers hire new employees, it has become increasingly difficult to get them to stay. In 2017, 30.6% of manufacturing workers left their jobs; by 2021, that number had jumped to 40%, according to the U.S. Bureau of Labor Statistics.

The Deloitte and MI survey found that more than one of every three younger workers (36%) had no interest in manufacturing. Carolyn Lee, executive director of MI, thinks that’s because of misconceptions about the industry—young people don’t realize that many manufacturing jobs require college degrees and even doctorates. “They don’t know this is an industry that might even appeal to them,” Lee said, in an article by the Society for Human Resource Management (SHRM).

Collaborating for the future

Southeastern Wisconsin manufacturers are tackling that challenge head-on. Dozens of them have banded together to establish CareerX, a project that will match manufacturers with local educators to bring students into the factories for tours and special events.

“Students have to understand that manufacturing is a great career,” says Susan Koehn, vice president of industry partnerships at the Metropolitan Milwaukee Association of Commerce’s M7 economic development group, which is coordinating the effort. 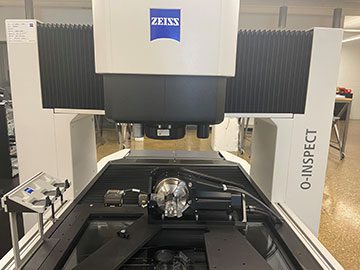 Koehn says she hopes as many as 50 companies will be involved in the program within a few years. “What’s unique about this is that we’re turning competitors into collaborators,” she says. “Without a talent pool that can serve all, there’s nothing to compete for.”

In the northeast region of the state, NEWMA has been emphasizing the importance of educating students since 2006. Franz says NEWMA started with 12 companies and now includes more than 200 manufacturers that employ more than half of the manufacturing workforce in the New North region, from Fond du Lac to the border of Michigan’s Upper Peninsula.

NEWMA works with nonprofit groups to find “job-ready individuals” and match them with the needs of member companies, Franz says. The organization creates science and math videos aimed at teaching students how those skills are used on job sites and in life, produces videos of local manufacturing employees talking about the work they perform, and offers training in data analytics and in project management.

NEWMA’s Internship Draft Day at Lambeau Field offers college students from across Wisconsin and Michigan’s Upper Peninsula a chance to schedule six 15-minute interviews with companies for a chance to earn a paid internship, apprenticeship, part-time job or college scholarship.

NEWMA serves as a liaison between educators and the corporate world, Franz says. “We create opportunities for them to create solutions,” she says.

Since it was established, NEWMA has received Fast Forward grants totaling $200,000 from the Wisconsin Department of Workforce Development (DWD).

LAB Midwest also focuses on educating the next generation of manufacturing employees. The Mequon-based organization distributes technology education systems in seven Midwest states, including Wisconsin, designed for students from kindergarten through college. In addition, LAB Midwest hosts a national technology education podcast, featuring executives from some of Wisconsin’s largest corporations.

LAB Midwest President Matt Kirchner says students should get exposed to robotics, automation and artificial intelligence at a young age. “The No. 1 influencer of a young person’s career pathway is the interests and experiences they have when they’re in middle school and high school,” Kirchner says. “It’s not difficult to convince them” to try manufacturing. “When they see what manufacturing looks like today, they get really, really excited.” 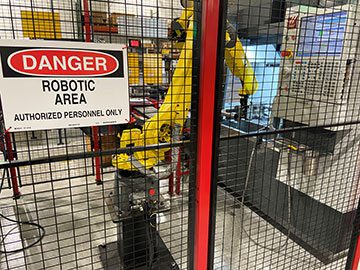 Popular apprenticeship programs include the use of technology and robotics.

Some companies have initiated their own on-site training programs aimed at area high school students. Precision Plus, an Elkhorn contract components manufacturer, hired its own trainer in 2013, began summer internships and expanded into youth apprenticeships. The company participates in Southeast Wisconsin’s Talent Optimization Project, which received a state Workforce Innovation Grant.

She says manufacturing is one of the district’s most popular apprenticeship programs because of its technology and robotics focus, and the students are highly motivated. Some head to their manufacturing jobs as early as 6 a.m., work for several hours and then attend classes and sports activities at the high school. “They’re hard-working young men and women,” Pella says.

Other companies are putting more thought into the image they present to the public. Panelists at the Manufacturing Matters! Conference said they have amped up their visuals. Mequon-based metals company Charter Manufacturing Co. has interviewed employees and posted the videos on LinkedIn, and bought billboards for the first time—“just to get our name into the market,” said Angie Zeigler, vice president, talent management.

Charter Manufacturing also tries to boost engagement within the company by giving employees more of a sense of purpose and of the broad impact of their work—that they are not just producing anonymous metal pieces, but rather, components for products ranging from recliners to oil pipelines to cars. “Knowing that piece of steel is going into an underwater pipe that’s carrying oil from here to there—that’s kind of neat and exciting,” Zeigler said.

Palmer Hamilton, a turnkey design and furniture manufacturer in Elkhorn, is also changing its look, marketing director Richard Hein told the conference. The company updated its website to make it appear “more fun (and) more inviting” and rewrote all job descriptions to make them “more emotional and less technical.”

Referrals are another way to try to attract job applicants, Hein said. “Referrals are where you’re going to find most of your employees,” he said. Palmer Hamilton offers employees a one-week vacation and $750 to spend on it if their referral stays longer than 90 days. “The only requirement is: when they come back, they have to give us pictures,” Hein said.

Another Wisconsin manufacturer with a referral bonus program is Pindel Global Precision, in New Berlin. Pindel, a precision machined components company, provides $250 if the new worker stays 90 days and another $250 after 180 days. The company has added a handful of employees through the referrals, CEO Bill Berrien says. 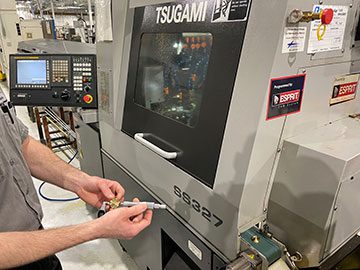 Employees learn how to use software to operate a computer numerical control (CNC) machines.

Berrien believes, though, that the best way to encourage employees to stay with the company is by upskilling them—helping them to grow their skills on the job. Courses are taught by in-house and contracted trainers and through ToolingU, an online program of the Society of Mechanical Engineering. Upskilling lets employees invest in themselves, Berrien says, and gives the company “the ability to hire for attitude, and train and promote for skills.”

Pindel received a $4,500 Fast Forward grant from DWD in 2020 to teach workers how to use software for the company’s complicated computer numerical control (CNC) machines.

Charter Manufacturing considers upskilling important as well, Zeigler said. Instead of recruiting a high-salary new employee with all of the requisite skills, designating the company’s own workers to take classes that will enhance their knowledge will benefit both the company and the employees: “They’re going to be more apt to stay with the company and be more engaged because we’re investing in them,” she said.

“You’re not necessarily choosing the thing you want to do forever, but you’re choosing where you want to start,” Lee told SHRM. “And I would be hard-pressed to find another sector that has as much upward mobility as we have in manufacturing.”