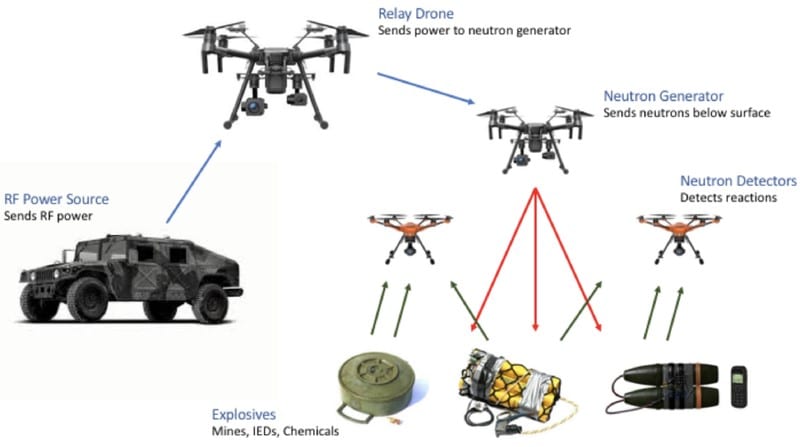 “There are more than 110 million land mines in the ground, and it’s growing by the year,” says Gerald Kulcinski, CMD cofounder and chief engineer. “In the last 15 years, there were 130,000 casualties due to land mines; half of them were civilians, and about half of those were children. I’m in it for the humanitarian side and to help save those children.”

Startup and early-stage companies that receive QNBV certification are able to leverage new capital because investors are eligible to receive a 25% state tax credit on the amount they invest in a certified businesses.

The program’s goal is to help companies attract new investment and boost the state’s potential for growth and job creation. Investors in CMD, which was certified for the program in April, are authorized to receive up to $1.25 million in tax credits.

Company officials are hoping the tax credit can help them secure $5 million that will be used to create a fully tested and functional prototype.

“We’ve attracted $800,000 in new investment already, largely because of the tax-credit program,” says CMD CEO Dennis M. Hall. “It’s intrigued and motivated investors. One upped his planned investment to $250,000, and another one upped his ante to $250,000. It’s been a tremendous tool.”

It’s also a tool that helps Wisconsin fuel ideas, innovation, people and a new generation to future prosperity—a goal identified in WEDC’s 2021 report Wisconsin Tomorrow: Building An Economy for All.

Explosives have a unique fingerprint that can be detected through neutron activation. CMD’s Red Rover System uses a drone-based neutron generator, which sends neutrons below the surface of the earth, paired with drones that detect the resulting reactions and pinpoint the mines. The neutron generator is powered by radio frequency waves beamed from a distant power source.

The system can detect mines—including today’s non-metallic mines—as deep as one meter below ground or water. No other existing detection technology can cover large areas rapidly and identify non-metallic mines at that depth. Because of that, detecting land mines and hidden explosives using existing technology can be a painfully slow and incredibly dangerous process. CMD’s drones can scour an area of 7,000 square meters an hour and keep personnel at a safe standoff distance.

The system is the brainchild of Kulcinski, an emeritus professor of nuclear engineering and director of the Fusion Technology Institute at the University of Wisconsin-Madison, and John Santarius, the firm’s cofounder and chief scientific officer and an emeritus research professor of engineering physics.

Kulcinski said the system could be used to scan sports stadiums for hidden explosives, by the military to protect troops from improvised explosive devices and by humanitarian groups for land-mine removal.

One of the challenges the company faces is making the neutron generator small enough to be functional as a drone—which would require it to weigh less than 20 pounds.

“We believe that the $5 million in investment capital will enable us to get to a workable prototype within a couple of years,” says Kulcinski.

Eventually, the technology could be used to pinpoint mineral deposits, help find the wreckage of airplanes downed over oceans, and help space organizations identify and assess resources in space. For now, the company is focused on the life-saving aspects of explosives detection in a dangerous world.

“Minefields displace a lot of people, because they can’t use the land and food production declines,” says Kulcinski. “But when you see pictures of children with limbs lost or children killed because they don’t understand the threat, that’s what motivated me. And it’s getting worse, because today people are putting more mines in than we’re able to take out.”