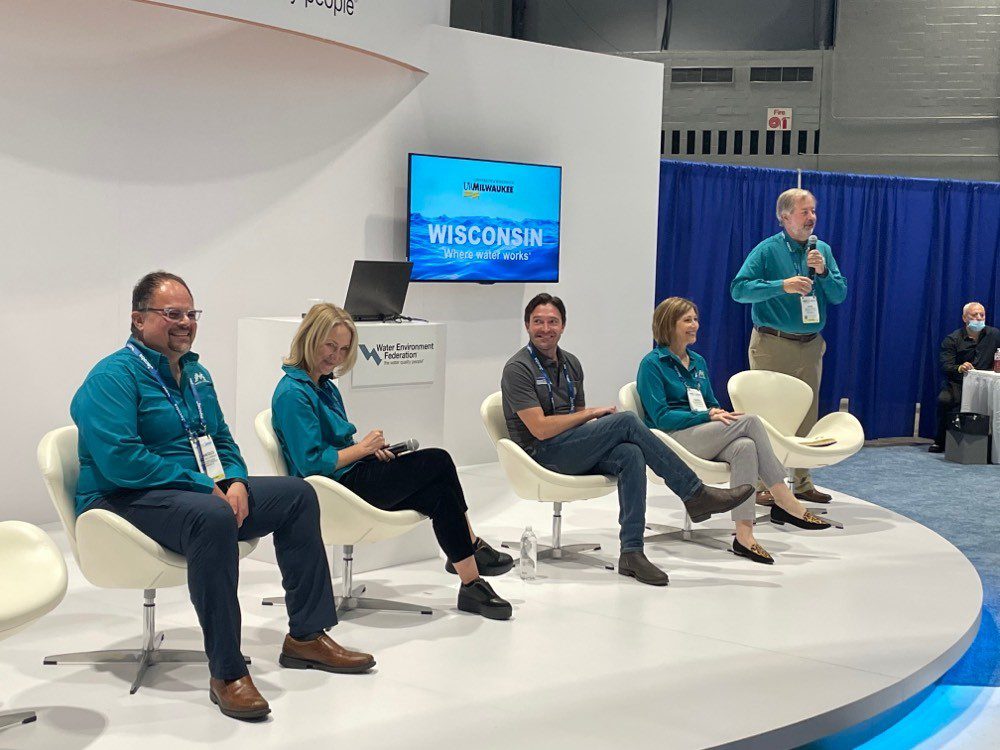 Representatives of WEDC and The Water Council cohosted the Global Center space at WEFTEC to highlight Wisconsin’s status as a global leader in water technology.

Wisconsin is a place where water works, so it makes sense the state was well represented at the Water Environment Federation’s Technical Exhibition and Conference (WEFTEC), the largest annual conference for water professionals, which was held in Chicago this week. WEDC cohosted the Global Center area with The Water Council, a water technology hub based in Milwaukee with a mission of driving freshwater innovation and advancing water stewardship around the world; about a dozen Wisconsin companies exhibited at the show.

A Monday afternoon panel illustrated Wisconsin’s status as a global water hub. Dean Amhaus, president and CEO of The Water Council, talked to Andrew Gralton, chief marketing officer at Milwaukee-based Clearwater Industries, about the joint venture The Water Council helped broker between Clearwater and SIGMA DAF Clarifiers, a Spanish water treatment company looking for a U.S. partner. The Water Council was able to connect the two companies through its memorandum of understanding with the Catalan Water Partnership in Spain’s Catalonia region, one of five MOUs it has with European water organizations. Karen Frost, vice president of economic development and innovation at The Water Council; Beverley Ferrara, The Water Council’s European representative; and Francisco Carrillo, WEDC’s  international business development director, also participated.

The international networking didn’t end with WEFTEC. As the show wrapped up, The Water Council escorted representatives of companies located in the UK, France, Germany, the Netherlands, Belgium, Canada and Japan to Milwaukee for a business development event. The Water Council also hosted representatives of the Korea Water Cluster at its headquarters at the Global Water Center before WEFTEC began. Wisconsin has a strong and growing reputation around the world for its leadership in water innovation.

Learn more about Wisconsin’s presence at WEFTEC on The Water Council blog.