What does the rapid expansion of new housing and the introduction of artisan kitchens to an economically challenged metro area have to do with industry cluster development? Everything, if done right.

Too often, the assessment of economic development impacts stars and ends with the jobs produced or capital investment made as a direct result of a single project. Industry development efforts take measurement a step further by, for example, gauging growth in sales or employment across participating companies within a geographic area. Still, little attention tends to be paid to the indirect benefits of economic development strategies once deployed.

That’s what makes Wisconsin’s investment in the state’s water technology cluster and its impact analysis unique.

WEDC’s ongoing investment and participation in Wisconsin’s water technology industry continues to pay off. An economic investment analysis of Milwaukee’s Water Technology District, anchored by the Global Water Center, reports more than $211 million worth of redevelopment between 2010 and 2015, including The Water Council’s Water Tech One and the University of Wisconsin-Milwaukee’s School of Fresh Water Sciences’ Freshwater Plaza. Since its inception, the district has also spurred redevelopment in a previously economically dormant section of the city, bringing in new anchor tenants as well as retail and housing projects.

The success of the cluster also caught the eye of top economic analysts at Harvard, who announced the launch of a study dedicated to understanding the cluster’s success for use in modeling in other cities. The district solidified Wisconsin’s leadership in the water technology sector—providing a hub for more companies to collaborate to solve the world’s water challenges. Milwaukee and Wisconsin have been cited by cluster strategy development expert Michael Porter as being best-in-class with their water technology development, and the state’s leadership in this area is widely recognized as one of the most successful examples of such a strategy anywhere. 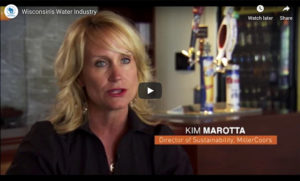 View the video to learn more

An industry-leading manufacturer of heavy-duty, portable electric power tools and accessories for professional users worldwide, ​Milwaukee Tool Corp. has expanded its Brookfield headquarters, will create up to 600 new jobs.

​American Packaging Corporation, a leader in the flexible packaging industry, recently selected DeForest as the location for a new satellite facility.

​Milwaukee and Wisconsin have been cited as being best-in-class for their water technology development, and the state’s leadership in this area is widely recognized for its success.