In the previous two segments I discussed appropriate design for new infill and stand-alone buildings in historic commercial districts. In this third and final segment, I will focus on additions to older and historic buildings. These can include additions to the side, rear or top of buildings. With this type of new construction, it is very important that the new portion does not physically or visually damage the existing building. Any new addition should take design cues from the original building style, but there are two different yet appropriate ways to approach this in my opinion.

The first, and somewhat controversial, approach is to view an addition as merely a deferred expansion of the original. In that case, the addition should look largely like the original in material, size, height, massing, setback, and ornamentation. Many preservationists disagree with this approach, saying it jeopardizes the historic integrity of the original because it’s too hard to determine what is historic and what is new. But as mentioned previously, it is my opinion that only a trained professional needs to be able to distinguish the two, and usually the new materials themselves are just different enough to set them apart when viewed up close. Plus, adding a simple date stone can easily achieve this distinction.

Some (not all) preservationists feel that building additions on historic buildings should be contemporary in design, like these examples. Some, however, feel that context with the original is the best way to respect its original design. Photo on left by Contemporist and on right by the National Park Service.

It is my opinion that new additions to historic buildings should play off of the original design, either with a slightly simplified version, or by using similar materials and architectural style as the original, as in this carriage house addition. Photos by Michael Klement.

The second approach, and one which I typically recommend, is to use the same massing, size, scale, proportions, etc., but simplify the materials so it’s relatively easy to determine what is new and old. In other words, if the original building has an ornate cornice, design the cornice on the new building the same height and depth, but without the degree of ornamentation as the original. With this approach, I almost always recommend that the new and old be divided by a modern connector, as is shown in the two examples below.

When it comes to rooftop additions, I almost always recommend that they be set back from the building face on all visible sides, so that it cannot be seen from the sidewalk below. This allows the original building appearance to remain intact. It also has an added benefit of creating possible rooftop patio space for the tenants, whether residential or commercial. 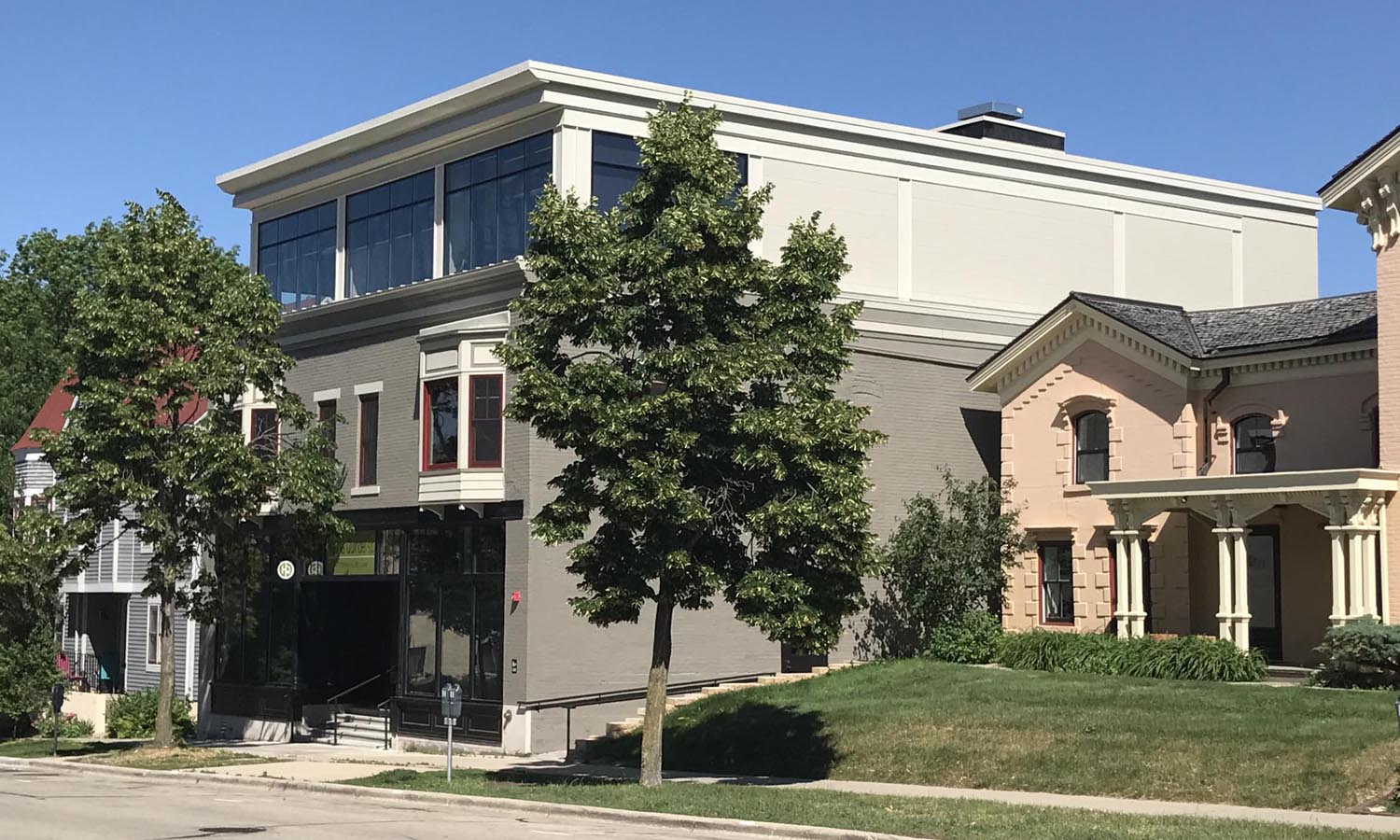 This photo shows an inappropriate way to design a rooftop addition, since it completely alters the scale and appearance of the historic building.

These images show the proper was to add a rooftop addition, by setting it back from all visible facades. Photo by Tamarin.

So that wraps up this discussion about proper design for new construction in historic commercial districts. As stated previously, being sensitive to a building’s surroundings is the best way to ensure that it will stand the test of time, and not be visually out-of-style each time design trends change.