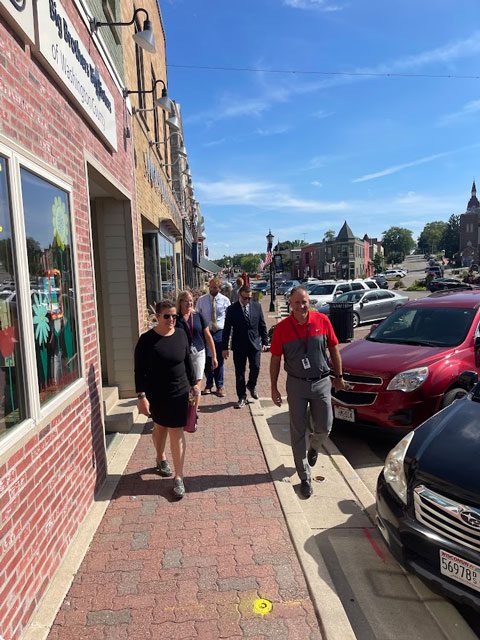 WEDC Secretary and CEO Missy Hughes was in West Bend in early September to visit some of the more than 50 businesses in the community that have received Main Street Bounceback Grants.

State incentives are helping communities such as Waukesha and West Bend invest in revitalization and make their downtowns into destinations.

Downtown districts in Wisconsin communities are ramping up their revitalization efforts thanks to a double dose of state funding from two WEDC programs.

Waukesha and West Bend are prime examples of the way communities can combine various economic development tools to multiply the impact on downtown redevelopment. In both communities, renovations of downtown theaters are helping to attract more visitors and, as a result, more potential customers for nearby businesses.

“Dynamic downtown districts are a vital element in the health of Wisconsin’s communities and the state’s economy as a whole,” says Mike Ward, WEDC vice president of business and community development. “WEDC grants are designed to support community efforts to revitalize, in both big and small ways.”

In Waukesha, the Academy Expansion Project is a two-phase, $4.5 million development that will result in a major upgrade to the Waukesha Civic Theatre’s facilities. Phase one will update the lobby and add rehearsal space, offices and classrooms. A community fundraising effort is underway to complete phase one and transition into phase two, which will create an 85-seat theater in a vacant clock shop next door, purchased by the Civic Theatre in 2020. The new performance space and amenities will provide many more opportunities for people to go downtown to see plays and concerts and take classes.

“Whether it’s patrons coming for a show or parents dropping their kids off and waiting at a nearby coffee shop, it’s overall going to increase the theater’s economic impact on Main Street and downtown as a whole,” says Jennifer Andrews, director of Waukesha’s Community Development Department.

The nonprofit Waukesha Civic Theatre staged its first performance in 1957 at Waukesha High School. In 1962, the theater group purchased a former church on Washington Street. This served as the organization’s home until 1999, when it took over the former PIX movie house at 264 W. Main St.

“The Waukesha Civic Theatre has long been drawing crowds downtown,” says WEDC Secretary and CEO Missy Hughes. “This renovation and expansion will allow the theatre to continue entertaining visitors and inspiring the next generation of artists to take the stage.”

WEDC announced a $250,000 Community Development Investment (CDI) Grant for the Academy Expansion Project in September. CDI Grants provide matching funds up to $250,000 to  support development and redevelopment efforts, primarily in downtown areas, and vary based on the potential economic impact of the projects. From the beginning of the program in 2013 through March 2022, nearly $34.8 million in CDI Grants were awarded to 166 communities statewide for projects expected to generate more than $517 million in capital investments.

Along with the grant for the Waukesha Civic Theatre’s expansion, WEDC has helped numerous small businesses move into vacant downtown buildings with the help of $10,000 Main Street Bounceback (MSBB) Grants—a total of 55 had been awarded to Waukesha recipients as of early October. One of the recipients is Chef Pam’s Kitchen, a commercial kitchen that offers cooking classes and space for local artisans to build their food businesses, with participants including A to Z Dinners, Vegan Bakers Man and Prairie Junction Farms.

“Downtown is vibrant and changing, and that’s been helping push some owners to make investments in their buildings,” Andrews says. 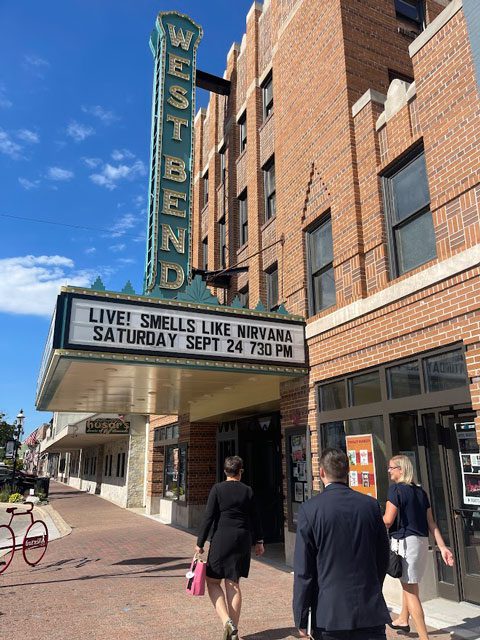 A $250,000 CDI Grant will help fund the renovation of the Historic West Bend Theatre, also known as the Bend.

West Bend’s downtown is hopping with the opening of shops ranging from a furniture boutique to shoe repair to LEGO toys.

“These grants have been an excellent tool to help spur economic development throughout West Bend, and specifically in the downtown,” West Bend City Administrator Jay Shambeau says. “This program has infused more than $500,000 into our local economy.”

Shambeau says the grants have brought businesses such as a revitalized mini golf course, a shoe repair store, a retro video game store and a kayak rental service. “The entire list of grant recipients is made up of local entrepreneurs who had an idea or always wanted a store of their own in West Bend. They now have one,” he says.

Urban Farm Girl is one of the new shops; it opened in August 2021. Owner Sheila Kruepke says she had qualms about starting a furniture and home decorating boutique in the midst of the pandemic, but when she saw the right building, she knew she had to take the risk.

“It was an empty building; it was a beautiful building and I knew if I didn’t snatch it up right then and there, I might not get the opportunity again,” Kruepke says. “The rent is a little higher in downtown West Bend, so this grant has definitely helped.”

Ray Carlson ran a shoe repair business housed in a former brewery building in downtown West Bend for 33 years. But a planned housing development forced Carlson to move in 2021. “This grant helped us have this new space and keep the business going,” he says.

Zach Zuleger turned his longtime passion for LEGO products into an online store that evolved into a shop in downtown West Bend with help from a Main Street Bounceback Grant. “It got me out of my house, initially, and it has spurred our growth,” Zuleger says.

The program, first announced in spring 2021 and funded with $75 million from the federal American Rescue Plan Act, has helped more than 6,200 small businesses and nonprofits since the first allocations were made just over a year ago. Governor Tony Evers recently announced that the program would receive another $25 million, bringing the funding total to $100 million to help local entrepreneurs.

In addition to the MSBB Grants, West Bend received a $250,000 CDI Grant to help fund the renovation of its Historic West Bend Theatre downtown, also known as the Bend. Built in 1929 to host vaudeville shows, the nearly century-old landmark had closed in 2006 but, through the efforts of a nonprofit group and its capital campaign, the Bend was restored in 2020, and now hosts movies, live performances and community events.

West Bend also is redeveloping its downtown Riverwalk, and has received a $2.65 million Neighborhood Investment Fund Grant from the state Department of Administration to continue with that project.