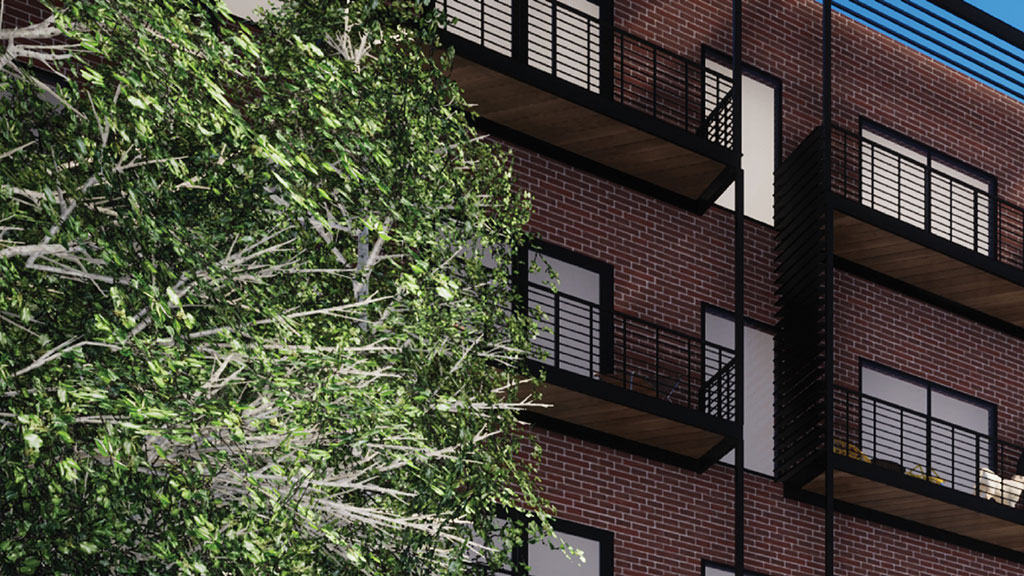 This rendering of The Common Place, a five-story, mixed-use building features 88 residential units, which include studios, one-bedroom and two-bedroom apartments, helping to address the need for mixed-income housing in Ashwaubenon.

A project combining 88 units of housing, a climbing gym and commercial space on a vacant site in Ashwaubenon is getting a boost from a $250,000 WEDC grant.

“While Lambeau Field is an excellent foundation and centerpiece of the area, there’s plenty of room for growth in the Village of Ashwaubenon,” said Missy Hughes, secretary and CEO of WEDC. “We’re thrilled to make the village more of a year-round hotspot for residents, as well as a sports and investment opportunity.”

Local officials are enthusiastic about the opportunity to transform the area.

“This is really a catalytic project for the whole area,” said Aaron Schuette, Ashwaubenon’s community development director. “Obviously, Packers games make for 10-plus fantastic weekends each year, but we also want to see that activity extended throughout the year.”

The project’s developer, Merge Urban Development Group, plans to offer studios, one-bedroom and two-bedroom apartments to address the need for mixed-income housing, including workforce housing, in the village. The site is within walking distance of many employment centers.

In addition, Odyssey Climbing Co. will be an anchor tenant, establishing a state-of-the-art gym and generating a dozen or more full-time jobs and additional part-time positions. The project will also include commercial space.

The project will bring new life to a parking lot that previously served as a truck-repair business  until 2014, when the village purchased the site and razed the buildings.

The developer’s plan matched the village’s master plan for the Sports and Entertainment District, adding housing while increasing the neighborhood’s appeal beyond the stadium.

“We’re attracting new and young people to live in the village and meeting them where they’re at, whether that’s a new job or a life transition,” Hannemann said. “This will place additional residential users in the neighborhood to enjoy all of the district’s offerings.”

Schuette said the project “further diversifies our housing stock in the village,” noting that the units are a bit smaller, so their prices can be a bit lower. “We’re trying to get more out of that urban, walkable and pedestrian-oriented feel in this area,” Schuette added.

The Community Development Investment Grant Program supports community development and redevelopment efforts, primarily in downtown areas. Since 2013, WEDC has awarded nearly $34.8 million through the program to 166 municipalities with projects expected to generate more than $517 million in capital investment.