A layperson’s guide to historic commercial building styles in Wisconsin

A layperson’s guide to historic commercial building styles in Wisconsin 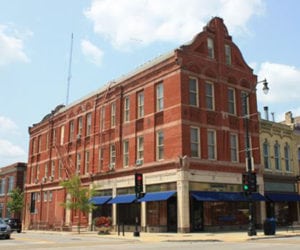 If you’re like most people, being able to identify a building’s architectural style is about the same as being able to recognize whether your favorite song is in 2/4 time or 4/4 time. It matters little to most of us. All we know is we like certain songs and not others. Similarly, most of us may like the way a certain historic building looks, but very few of us care how the slight nuances in the size, shape or location of its elements can define it as one style or another.

But even if we don’t have a desire to learn all about the various types of historic buildings, it is still important that architectural surveys are done to help us identify the structures in our districts. Knowing a building’s style is like a blueprint. It provides clues to what a building would have looked like originally, especially if it has undergone changes in the past. Knowing a building’s style can help to determine roughly when it was built, and conversely, knowing when it was built can sometimes help us determine what style it is/was and what window styles and storefront designs are appropriate.

If we strive to respect our local heritage, then our historic buildings are vital in helping us understand the people, times, fashions, lifestyles, technologies, and industries that existed before us, and how they shaped our communities, regions, and state.

But if you’ve ever read books or researched online about building styles, you’ve no doubt found that most of the examples they show are of historic homes, not commercial structures. This can make it very difficult for the average person to make a determination about a Main Street building’s style. Also, most books or online guides show only one or two examples for each style, despite the fact that most styles have numerous variations.

Furthermore, some buildings defy categorization, so preservation consultants must guess, or lump them into what I call “catch-all” styles, such as “Commercial Vernacular”, or the even more vague “Other Vernacular”. The problem is, there is then no one unifying characteristic of vernacular, so it’s difficult to use its classification as a blueprint for a renovation or restoration project. 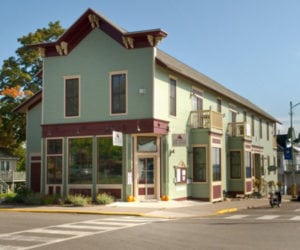 But beyond building elements, European immigrants made their mark on the state, shaping the character of our communities here in Wisconsin when they arrived. Their old world knowledge and construction skills influenced their building material choices.  Miners in Mineral Point preferred the local limestone, while Germans in eastern Wisconsin built from local fieldstone.  In the Northwoods, Finns and Swedes preferred log and timber construction.  In some places, like Milwaukee, immigrants built styles popular in the homeland, such as t Flemish and German Renaissance Revival style buildings.  Most commonly, commercial architectural styles were borrowed from the dominant styles popularized in the eastern United States such as the Federal Style or the Italianate Style.

As a result, most of America’s popular building styles are represented within the state, from the more decorative Italianate and Queen Anne, to the more utilitarian twentieth century styles. Since most of the development in Wisconsin began in the mid-1840s, examples of early styles, such as Georgian, Colonial, Jeffersonian, or Dutch Colonial are not prevalent in the state. But one early style that pre-dated Wisconsin’s statehood is the Federal style, which survives mainly in historic mining towns in the southwestern part of the state, such as Mineral Point and Platteville.

A list of the major historic commercial building styles found in Wisconsin today can be found below (in order from most prevalent to least) along with multiple illustrations of each. While virtually every building style exists in the larger cities of Milwaukee and Madison, nearly all of the examples highlighted are purposely from smaller communities, both urban and rural. All photos courtesy of either the Wisconsin Historical Society Architecture and History Inventory (WHS) or Wisconsin Main Street (WiMS).

Very common to all areas of the state. Almost half of all retail buildings ever surveyed are lumped into this category. By definition, vernacular buildings reflected the traditions, materials, and building methods of the region they were built, thus why there is no one unifying characteristic. They generally adopted the forms, scale and materials of more high style building of their period, but lacked stylistic details.

Characterized by arched or ornate windows and decorative brickwork, the Italianate was the most common 19th century style in the state. Common in every corner of Wisconsin, but very prevalent in cities such as Ripon, Watertown and Janesville.

Characterized by tall false facades (parapets) hiding a pitched roof behind. Common in all areas of Wisconsin, especially in rural areas. These wood-framed and wood-sided buildings were typically built during a city’s first commercial boom, but were often lost to fire and replaced with brick in the late-1800s. Hundreds still survive today.

Front gabled buildings are similar to Boomtown in that they have pitched roofs, but instead of the gable end being concealed by a false façade (parapet), the roofline is visible. Examples of this style exist all over Wisconsin, but are predominantly found in Milwaukee and its suburbs.

This style is typically reserved for monumental buildings, such as banks and museums, with prominent columns and cornices derived from Greek and Roman architecture.  This style can readily be found in Milwaukee, Madison, La Crosse, Oshkosh, Racine, Superior and Janesville.

The overriding characteristic of this style in commercial architecture are multiple windows connected under broad arches or connected in a series of arches. This building type is common in Milwaukee, Oshkosh, Superior, La Crosse, Madison, Racine and Stevens Point.

Clay tile roofs or mansard canopies and/or shaped gables drawn from Spanish missions characterize this building style. Often found in suburban strips in and around Milwaukee.

Inspired by the designs of planes and locomotives, this streamlined building style incorporated sleek surfaces and horizontal lines suggesting motion. In some cases, structural glass modern storefronts were added to non-art deco buildings. It is uncommon, but most often found in larger cities like Milwaukee, Madison, Green Bay, Beloit, Eau Claire, Kenosha, Ashland and Sheboygan.

These Germanic styles incorporate tall, ornately-shaped gables, and exude an Old World character. Both were used in breweries and tied-house taverns. These styles are almost exclusively found in Milwaukee and its suburbs, with some examples in Sheboygan and Racine counties.

This style largely consists of wood-framed, wood-sided structures, with returns at the eaves on the gable ends and Greek-inspired columns. The style was inspired by Greek temples and used heavily in areas developing around the time that Wisconsin became a state, such as Rock, Sheboygan and Racine counties. It can also be found in the southern Fox Valley.

This style is often easy to identify, because of the tell-tale Tudor wood and stucco gables in key areas of its buildings. This style is prevalent in larger cities such as Milwaukee, Green Bay and Madison and their suburban retail centers, as well as Sheboygan and the communities that surround it.

This building type was used in larger cities for office buildings and departments stores, and incorporated grouped windows in rectangular bays divided by columns of terra cotta or stone. They can be found in Milwaukee, Racine, Kenosha, Green Bay, Superior, Marinette, La Crosse, Wausau and Manitowoc.

This style used low, horizontal forms, geometric detailing, reliefs and ornamentation drawn from stylized plant forms. Wisconsin’s own Frank Lloyd Wright, as well as Louis Sullivan of Chicago, were two of the most famous architects of this era. Commercial buildings are rare, but many Prairie School libraries can be found in Wisconsin small towns.

Another building style (like Prairie School) developed by a famous architect. In this case, Boston architect H.H. Richardson blended Romanesque architecture with his trademark stone-arched openings and massively rough stone exterior. This building style is commonly used for banks and large civic buildings and found in larger cities such as Ashland, Superior and La Crosse, as well as Milwaukee and Oshkosh.

This style came about on the tails of Greek Revival. It is most commonly used in religious buildings. Commercial examples are quite uncommon, utilizing tall, pointed windows and gables, and ornate detailing. Most examples can be found in Milwaukee, Mineral Point, Racine, Janesville, Eau Claire and Madison.

Similar to Neoclassical, with its use of large stone or terra cotta units and often columns, this monumental style was used in banks, civic buildings, museums, courthouses and even the Wisconsin State Capitol. Commercial buildings of this type were rare and only found in larger cities such as Milwaukee, Madison, Eau Claire, Kenosha, Manitowoc and Green Bay.

Characterized by sloped mansard roofs and dormers set in the roofline. This style was found in many areas, including Milwaukee, Baraboo, Eau Claire, Janesville, Madison, Wausau and Port Washington.

One of the earliest styles found in Wisconsin, they typically consist of pitched side walls with one or two chimneys, and heavy rectangular stone lintels. They survive in the Southwestern part of the state in Mineral Point, Platteville and Prairie du Chien, but were once common in Milwaukee, Watertown, Port Washington and Racine.

Tips and links apply to any city