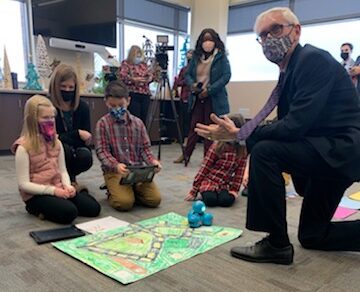 Elementary students in the Howard-Suamico School District showed off their computer science projects to Governor Evers during a December event where a $150,000 grant was announced for a computer science pilot project being tested in Brown County schools.

A pilot program that trains teachers to bring computer science into Wisconsin K-12 classrooms is getting a boost from a $150,000 grant from WEDC.

Governor Tony Evers and WEDC Secretary Missy Hughes made the grant announcement in the Howard-Suamico School District, where students as young as kindergartners showed off their understanding of computer science principles.

“Technology is the pathway to innovation in everything from health care and education to manufacturing and commerce. It is the future of our state and our economy,” said Governor Evers. “These funds will be an important resource to ensure our kids—even as young as kindergarten—have the opportunity to explore computer science and expand their skills, all while providing students with important outlets to get creative and grow academically.”

“We have the talent in our schools to fill the jobs of today and tomorrow in the computer science world,” says Dickert. “The training we are providing to educators and the partnerships we are establishing with businesses will make students successful in the classroom and the workforce. This grant will carry on the momentum we have established in our schools.”

Industry connections with programs like CSTEY are key to addressing a shortage of qualified high-tech workers now and in the future. CompTIA, a nonprofit association for the information technology industry, estimated Wisconsin the number of tech jobs in Wisconsin as 220,000 at the end of 2021.

“One of the things that stands out about those jobs is that the median annual salary is more than $71,000 a year,” says Hughes. “Those jobs provide wages that will allow a Wisconsin family to achieve economic stability and enjoy all the wonderful things Wisconsin offers, and the number of opportunities that require computer science and technology literacy is only going to grow.”

Allowing students to explore multiple aspects of computer science while still in public school allows them to more carefully plan their college education and career choices, says Chad Behnke, who teaches everything from introduction to computer science to artificial intelligence and cybersecurity at Howard-Suamico’s Bay Port High School. Behnke estimates he could have saved $20,000 or more in college tuition if he had been able to narrow down his focus earlier.

“There’s just so many different opportunities in this digital world,” he says. “I don’t want students to waste time.”

Incorporating computer science principles into elementary school lessons can be intimidating for some teachers at first, says Becky Stapel, a technology integration specialist who works with kindergarten through fourth-grade students at the district’s Forest Glen Elementary. With computer science principles already being explored in the core curriculum, she notes, those principles just need to be identified and then expanded upon in subjects such as math, language arts and science.

“The beauty of computer science is that the kids are so engaged in it and motivated by it that problems don’t intimidate them when they arise,” says Stapel. “They embrace the challenge and explore solutions.”

Several elementary students Stapel worked with were on hand to show the governor just what they were learning about computer science, including kindergartners learning to plant a seed using a program called Scratch Jr. to program their flowers to grow taller when touched on the iPad screen with sunshine or water droplets.

“Some of our students took it a step further and said, ‘Can we create a tornado and every time someone touches the tornado, the flower shrinks because it’s bad for it?” Stapel said.

Stapel hopes that by exposing students to basic computer science concepts early on, they won’t hesitate to sign up for more advanced classes in high school. Already this year, Behnke says he’s added a third section of his introductory computer science course to meet student demand.