Successful events during the pandemic

Successful events during the pandemic

Creating a sense of normalcy and bringing the community together has always been an important goal for the Main Street districts around Wisconsin, but the lingering threat of COVID-19, has posed continuing difficulties for hosting events. Nevertheless, communities are doing their best to host events with social distancing and safety modifications in place, and we are taking this opportunity to highlight innovative approaches and best practices so communities can learn from one another’s examples.

Platteville – Music in the Park Series

Over the course of the summer, Platteville’s Music in the Park series has maintained the tradition of having live music in the City Park every Thursday evening. The Music in the Park series is an eight-week concert series throughout the summer. This year, during the pandemic, Platteville gave the attendees of these events the responsibility to practice safety measures. They asked all attendees to wear masks and practice social distancing. In addition, they stressed that the attendees’ respect for each other would be the key to whether the they could continue for the full eight-week series or not—and they have been able to do this successfully! Platteville averaged nearly 300 people of all ages during the eight weeks, and the food truck and ice cream truck sold out each night. Music in the Park gave Platteville a sense of normalcy and lifted the spirits of those who attended the event. It gave residents a way to get outdoors and enjoy a community event in a relatively safe setting. Though the event looked a little different this year, it has been a huge success in the Platteville community. 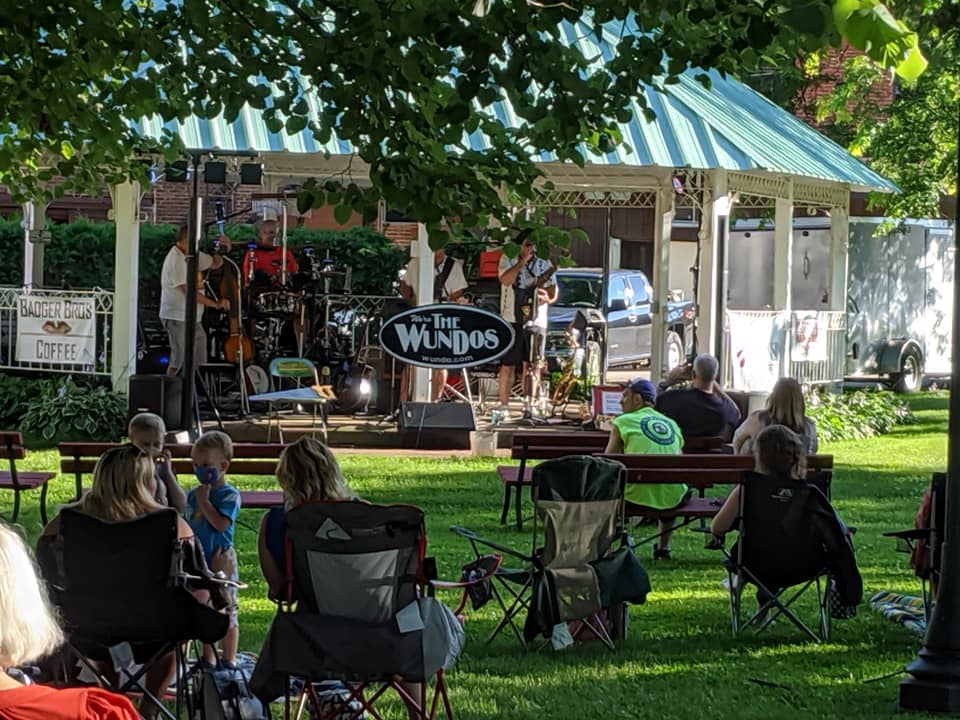 The Farmers Market on Broadway adapted to the COVID-19 crisis by limiting categories of vendors to only include essential goods, limiting shoppers to only 600 in the market at a time, and increasing space between vendor booths and the width of aisles. Masks were required within the outdoor, semi-enclosed space. The On Broadway organization also worked with their sponsor, Investors Community Bank, to give out personal size hand sanitizer containers to shoppers at the entrance to the market.

The On Broadway organization hosted a virtual shopping event during the month of May called “Dr. Broadway: Virtual Retail Therapy.”. Each Saturday in May they featured specials from participating retailers within the discussion tab on Facebook for people to connect with local businesses and purchase available items. Over the course of two hours each week for four weeks, they highlighted 14 businesses and made more than 50 posts promoting the retailers. Of these 50+ posts, many were videos of the shop owners talking directly to the customers. Some shops also started doing live videos for the retail event and have continued going live on their own pages even after the virtual event was over. 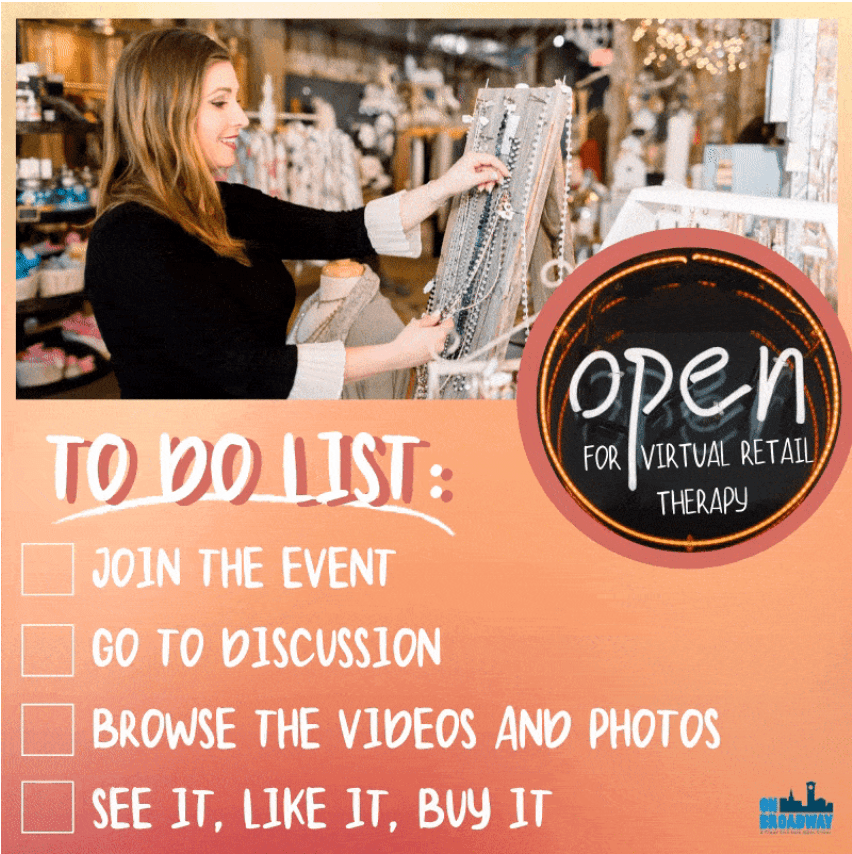 Wausau – Dining on the Street

Dining on the Street was created to allow the Wausau community to dine al fresco in a safe manner during the pandemic. Third Street is fully closed and tables are brought out on the street every Wednesday night from 5 to 9 p.m. In addition, live, local music is featured on the block, giving musicians a chance to perform live. Due to the success of Dining on the Street, the event has been extended through the month of September. 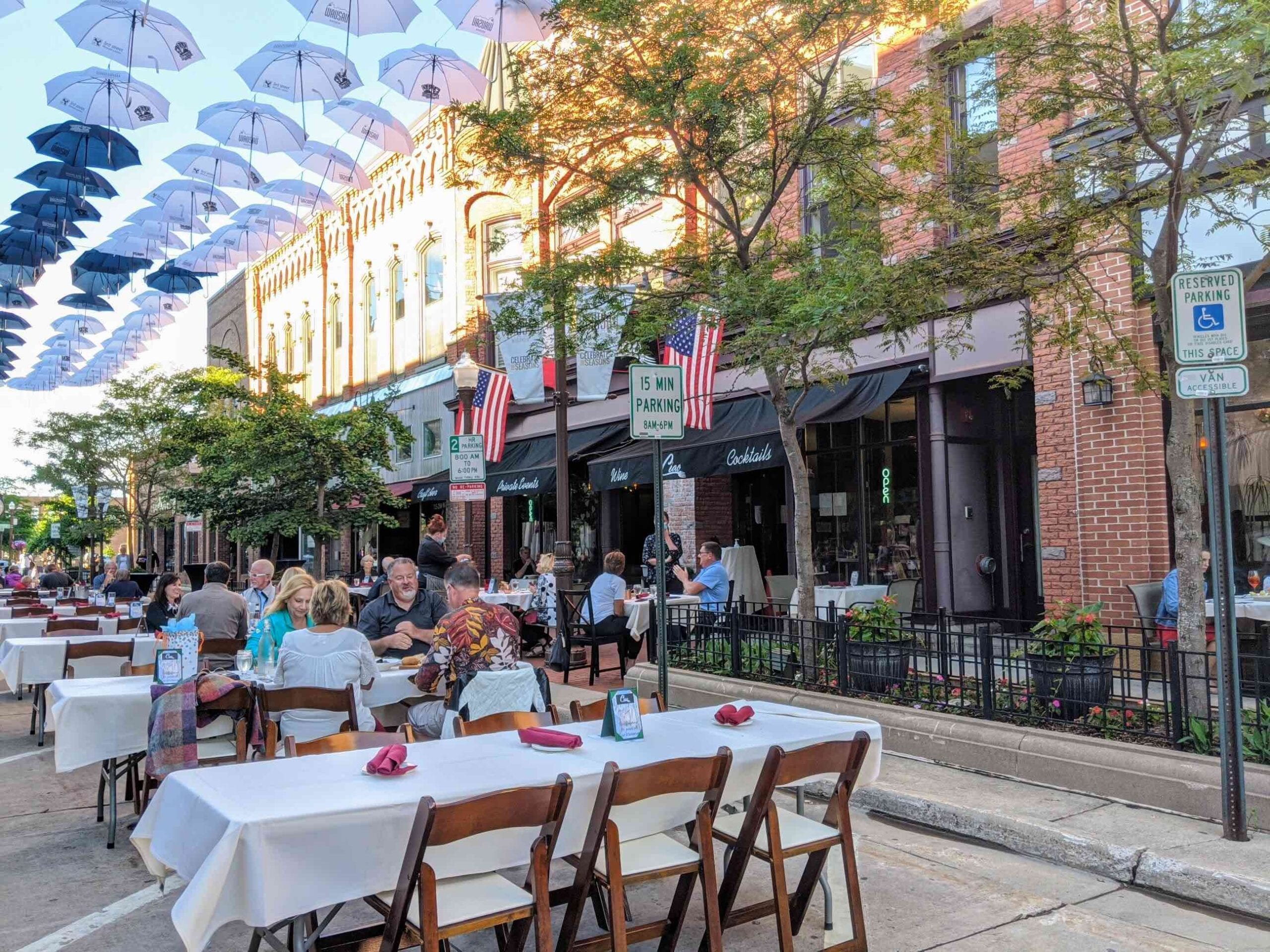 Mayville’s Summer Shindig was held on Aug. 7 and took over two blocks on Main Street to utilize a large part of the downtown for the event. Vendors were set up in a socially distanced manner, with hand sanitizer available to the public. Local businesses ran specials or brought their wares out to the street for sale. The event featured a petting zoo, with social distancing enforced and with feed for the animals sold in ice cream cones. The local American Legion chapter enlisted Leroy Meats to offer a fish fry for attendees, with socially distant tables that were sanitized with each use and sanitizer on every table for the patrons; in addition, they offered pick-up service for anyone who preferred not to dine inside. Posies located at the entrance to Main Street sold masks on the street for anyone who wanted to purchase. A live band played outside, with socially distant seating areas set up. The center of Main Street was also used for Chalk Art, with a Mayville Strong mural outlined for kids to fill in and create around. Feedback from the vendors and the business owners was positive and they stated that they would participate in the event in the future if offered again. 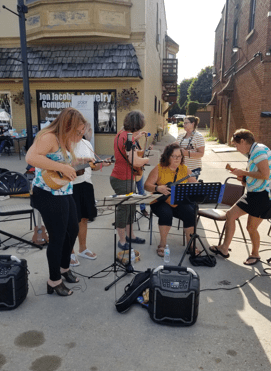 La Crosse – Picnic on the River

Picnic on the River was an upscale carry-out fundraiser held in La Crosse by the Downtown Mainstreet organization. The event raised money to benefit local downtown businesses, and 50% of the profits were donated to the Pearl Street Brewery La Crosse Area Bar and Restaurant Relief Fund. Three different packaged options for meals were offered, ranging in price from $50 to $120. The packages were prepared in collaboration by the culinary team at the Waterfront, with desserts from the award-winning Meringue Bakery and refreshments from Lost Island Winery and Pearl Street Brewery. Attendees were able to enjoy their picnic at one of the beautiful riverside parks or outdoor locations and they received instructions for a self-guided Downtown Murals Walking Tour. Downtown Mainstreet Inc. partnered with a local nonprofit to help sell tickets and bring more awareness to the event, which logged a total of $3,000 in profit.

Shullsburg – Music in the Park

The Music in the Park series in Shullsburg is a 17-year-old program. The annual event proved especially popular in a year when people have fewer event options overall. Attendees were sensitive to others’ desire for social distancing and respectfully distanced themselves to make the event run smoothly. The quality of the entertainment, and growing word-of-mouth advertising, also contributed to the event’s success. The sponsors and supporters of the event were delighted to be able to keep the music alive in Shullsburg. 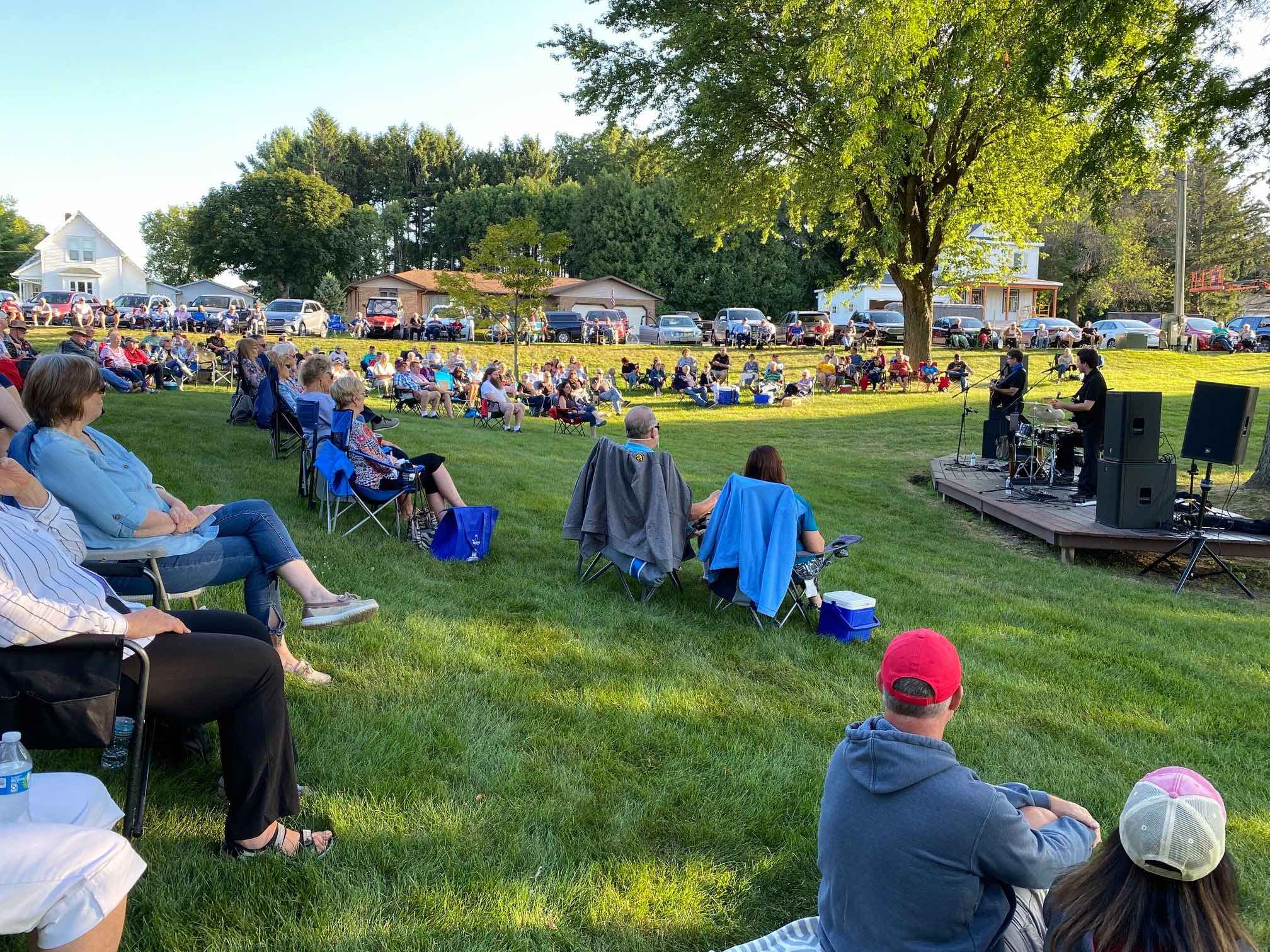 On Sept. 5, Shullsburg held their fourth annual Cruisin’ Shullsburg Car Show. Pandemic notwithstanding, the event had the best turnout yet, with 171 cars registered. While the original event date was set to be in early June, it was eventually held in September once organizers felt they could better comply with COVID-19 protocols. 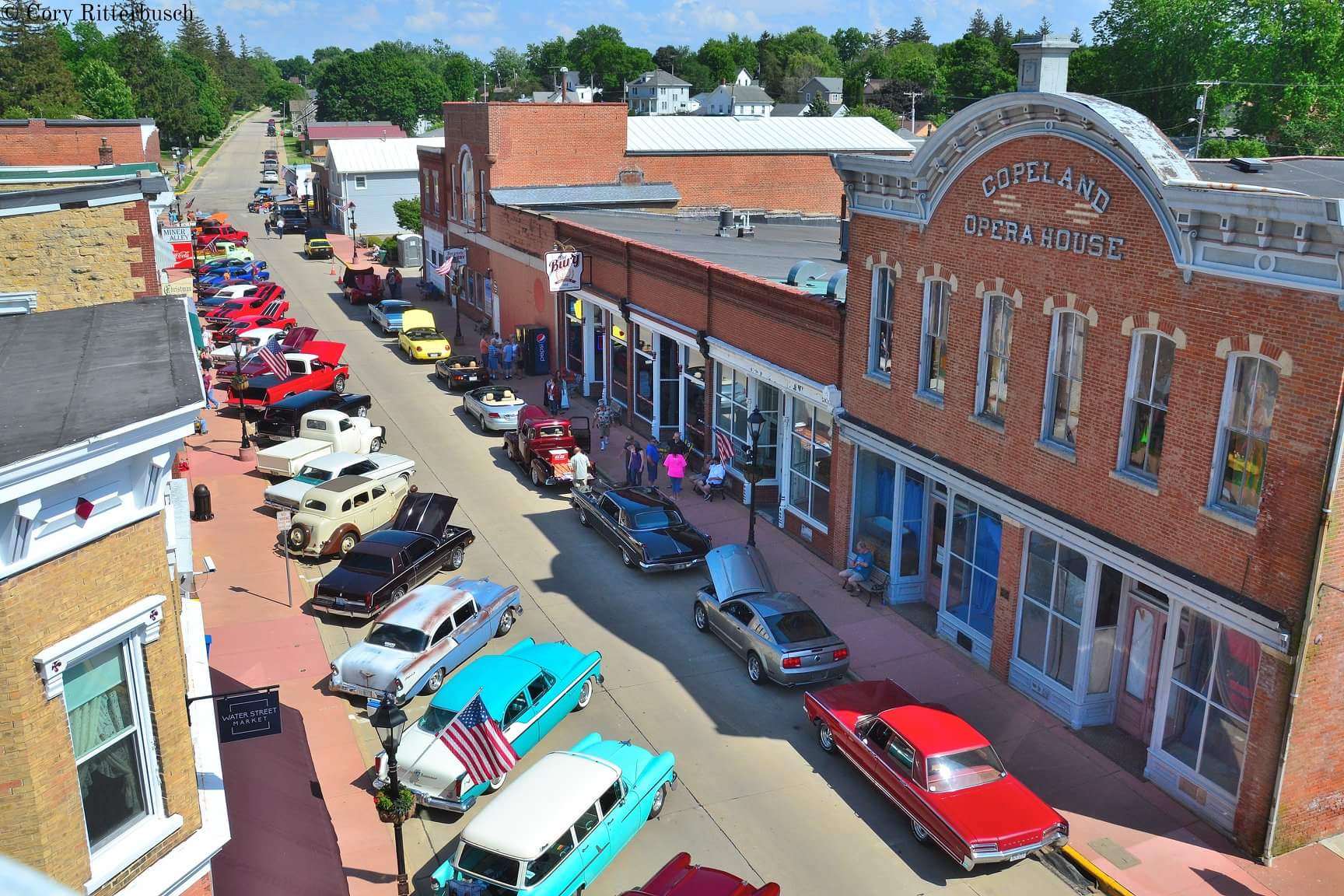 The Downtown Chalk Walk in Rice Lake was held on Thursday, July 30. The community had 15 people participate in creating art, and more community members come to watch the artists and view the chalk up and down Main Street. After this initial success, the organizers hope to hold it again next year and turn it into something much larger. 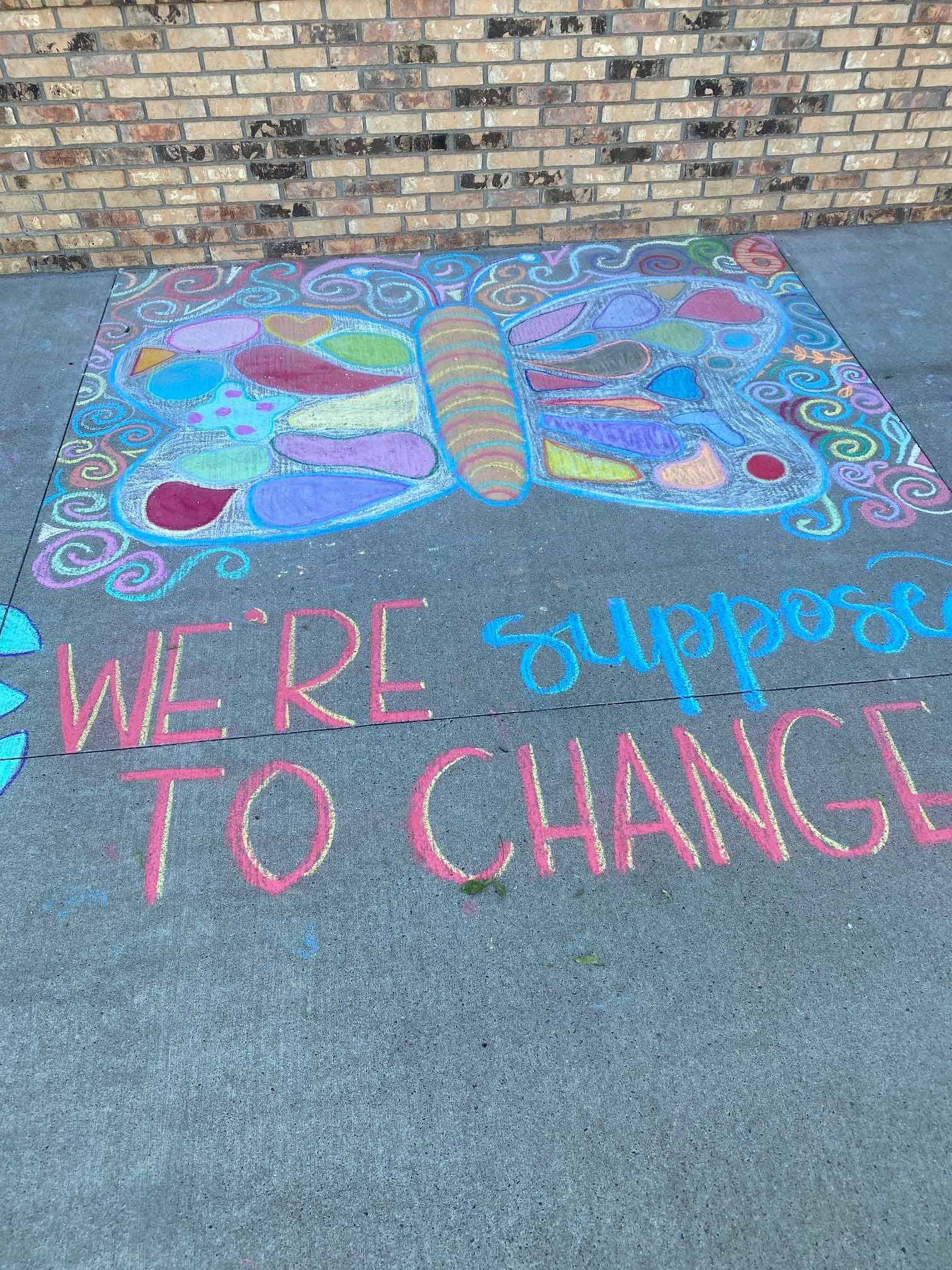 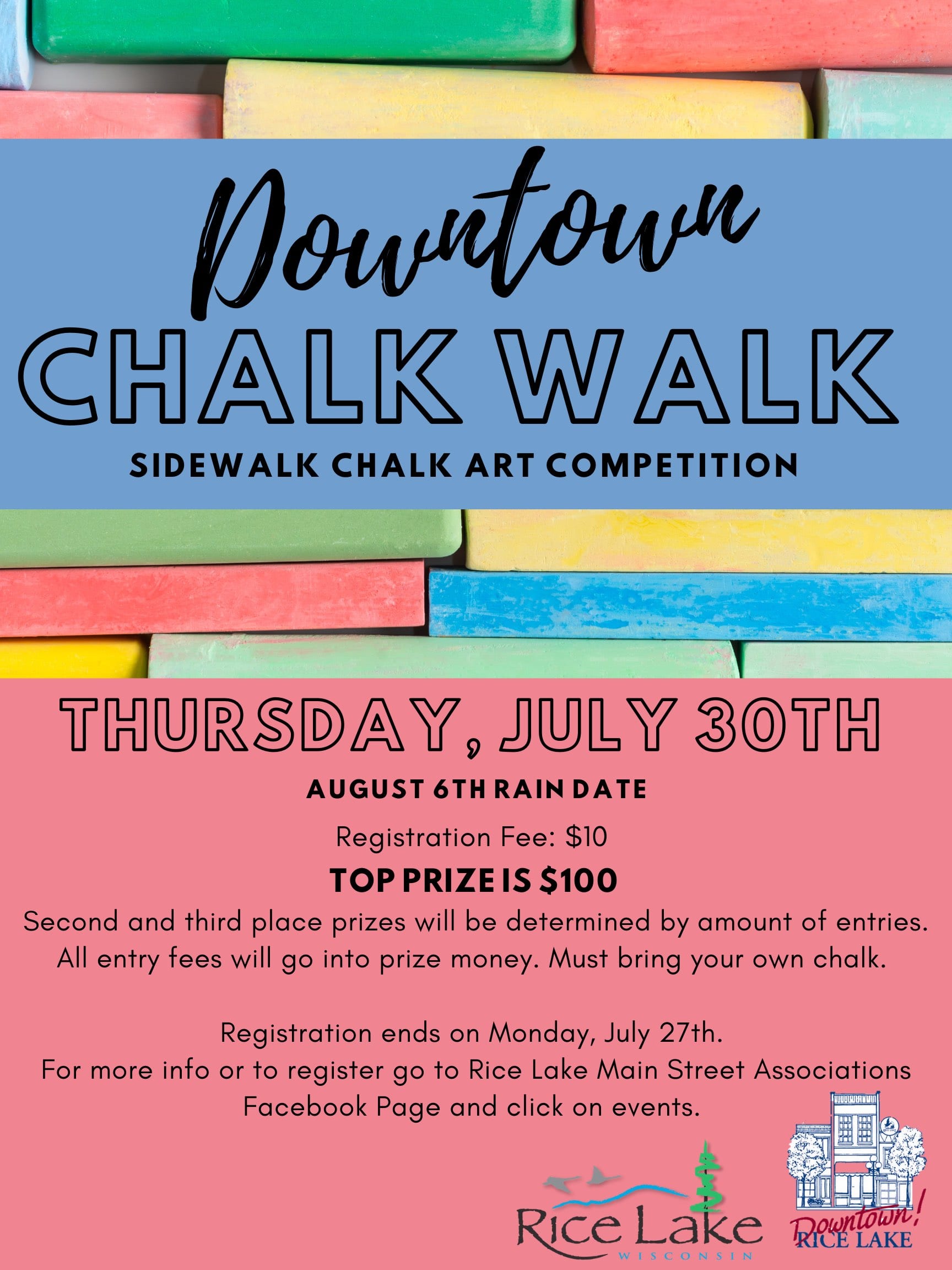 In April and early May, Sturgeon Bay realized there was a need for a large, open, outdoor area for people to shop and dine. The Under the Stars Night Market began July 11 and will continue to run every Saturday night until Oct. 17. The market has been a huge success and has gained traction throughout the county. Retail businesses stay open late, restaurants utilize the road as an extension of their business, and with the new open container ordinance, residents can walk the streets of Sturgeon Bay with a beverage. The market has a small number of vendors that are distanced at least 20 feet apart, including local businesses outside of the downtown district as well as smaller local farms that might not get as much exposure at the local farmers markets. Some local businesses reported record July numbers, with larger sales on Saturday nights than they would on major event days in the past. More than anything, the night market has boosted the morale of the local community by providing a relatively low-risk activity that allows them to socialize with their neighbors.