Three types of funding your organization may be missing out on

Three types of funding your organization may be missing out on 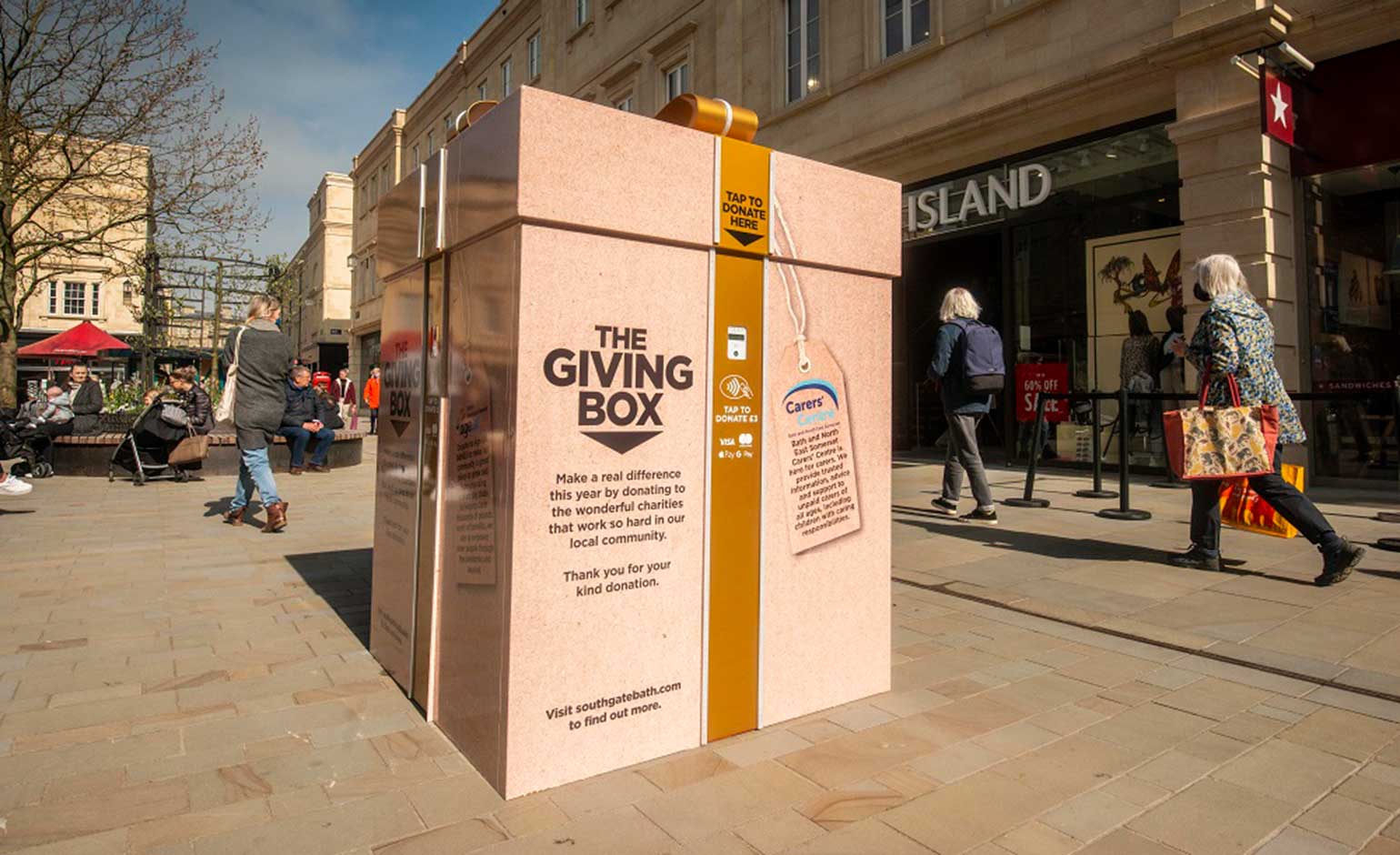 Community organizations are adept at being creative when it comes to doing more with less. By leveraging their extensive network of partners, Main Street and Connect Communities organizations can attract in-kind support to cover many expenses while programs and events generate revenue and attract sponsor dollars to help achieve their downtown vision.

This focus on fundraising for specific projects or events in the work plan means that many organizations are missing larger potential sources of funding that could sustain the mission and support initiatives not directly tied to revenue streams. Three types of funding that organizations would benefit from exploring include: individual giving, challenge events and endowments. 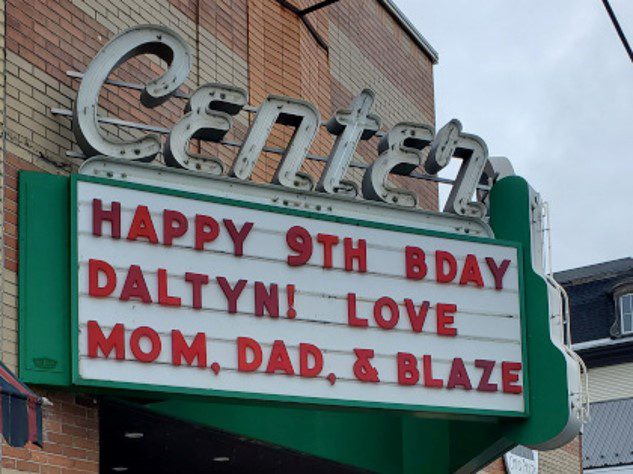 Individual giving is the single largest source of charitable funding, comprising 71% of all nonprofit donations nationwide. This has long been true, but the nature of this giving is changing, and organizations can position themselves to tap into the psyche of their supporters to capture additional dollars. While in the past the end of the calendar year prompted many to make their annual charitable gifts, new tax laws have reduced the importance of end-of-year requests for most households. Similarly, pass-the-boot and similar donation strategies used to be a common way to appeal to event attendees for funds, but today’s audiences carry little to no cash. 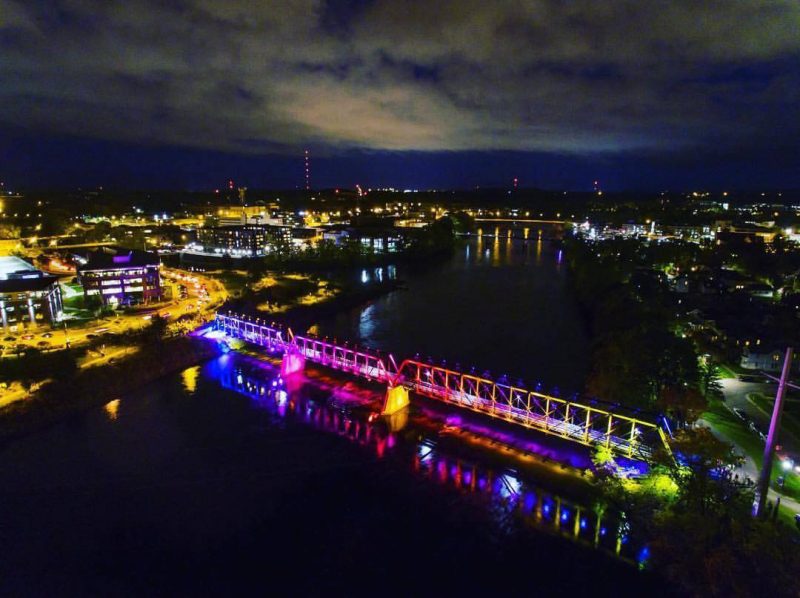 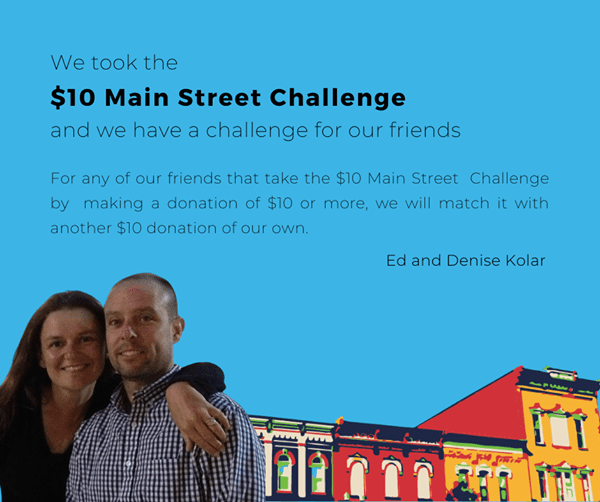 Milan, Michigan’s Main Street hosts an annual $10 challenge which features
supporters (and sometimes their pets) in a social media campaign

Challenge giving is another way to secure individual or small corporate contributions by fostering a culture of giving and making the donation itself into an event. Donors receive the psychological benefits of making a charitable contribution and also of being part of a bigger cause. There are existing national platforms designed to harness this trend that community organizations can tap into, and many communities have created their own localized campaigns that have also been successful in increasing charitable donations.

Giving Tuesday is a global generosity movement with a vision of “unleashing the power of radical generosity.” Giving Tuesday, which occurs annually on the Tuesday after Thanksgiving, was created in 2012 around a simple idea: a day that encourages people to do good. Since then, it has grown into a year-round global movement that inspires hundreds of millions of people to give, collaborate and celebrate generosity. Giving Tuesday provides templates, toolkits and messaging that are free for local nonprofits to use. In addition to fundraising, Giving Tuesday highlights the importance of donating time and support as well, allowing anyone to identify a way to help. (10 ways callout)

10 ways you can make a difference in downtown today

Several Wisconsin communities host collaborative charitable events under the Give Big or Big Share platforms. In the greater Green Bay area, the Green Bay Community Foundation and the Green Bay Packers identify local nonprofits to be part of their annual event, which challenges corporations and individuals to contribute online during a 24-hour period. By leveraging their large networks and media reach, the partners can drive contributions from a broad spectrum of the community. Participating nonprofits are also provided with visuals and marketing tools to help showcase their mission and impact so donors can become familiar with the wide variety of organizations that serve the community. In 2020, the event raised more than $2 million from a total of 4,854 donors and benefitted 45 organizations. 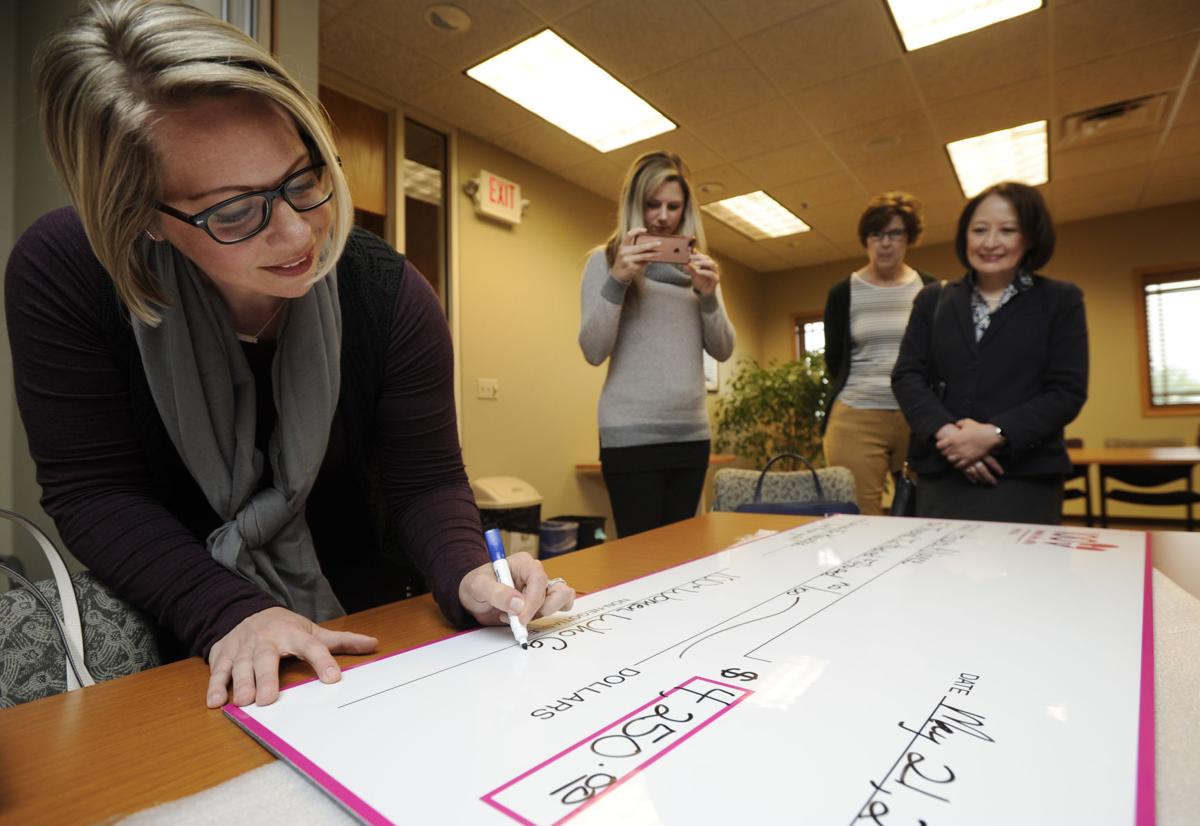 Several communities have variations on the 100 Who Care theme, which issues a personal challenge to 100 individuals in the community each year. By identifying an individual as one of 100, this exclusive invite encourages them to be part of an elite group contributing to the community. By pooling contributions and focusing the efforts of 100 influential individuals, the selected cause is able to raise its profile and generate significantly more funds. Kenosha County’s 100+ Women who Care raised $100,000 over its four-year tenure by asking each contributor for $100. Participants attend an evening event where they can meet and mingle with area nonprofit leaders and hear about their latest projects. At the end of the night, one nonprofit will be rewarded with the $10,000 pot, while others have had the opportunity to make connections with potential new stakeholders. The Fond du Lac Area Foundation has a similar Fondy 100 event, while Darlington held a 100 Men & 100 Women campaign to raise funds for its opera house restoration.

If your community doesn’t have a local day of giving, consider starting one. At the very least, take the opportunity to make sure that online giving options are visible and simple on your website and social media, and consider utilizing some of the tools provided by existing campaigns to help better tell your organization’s story to make a compelling case for donors who might be looking for a new way to support the community. 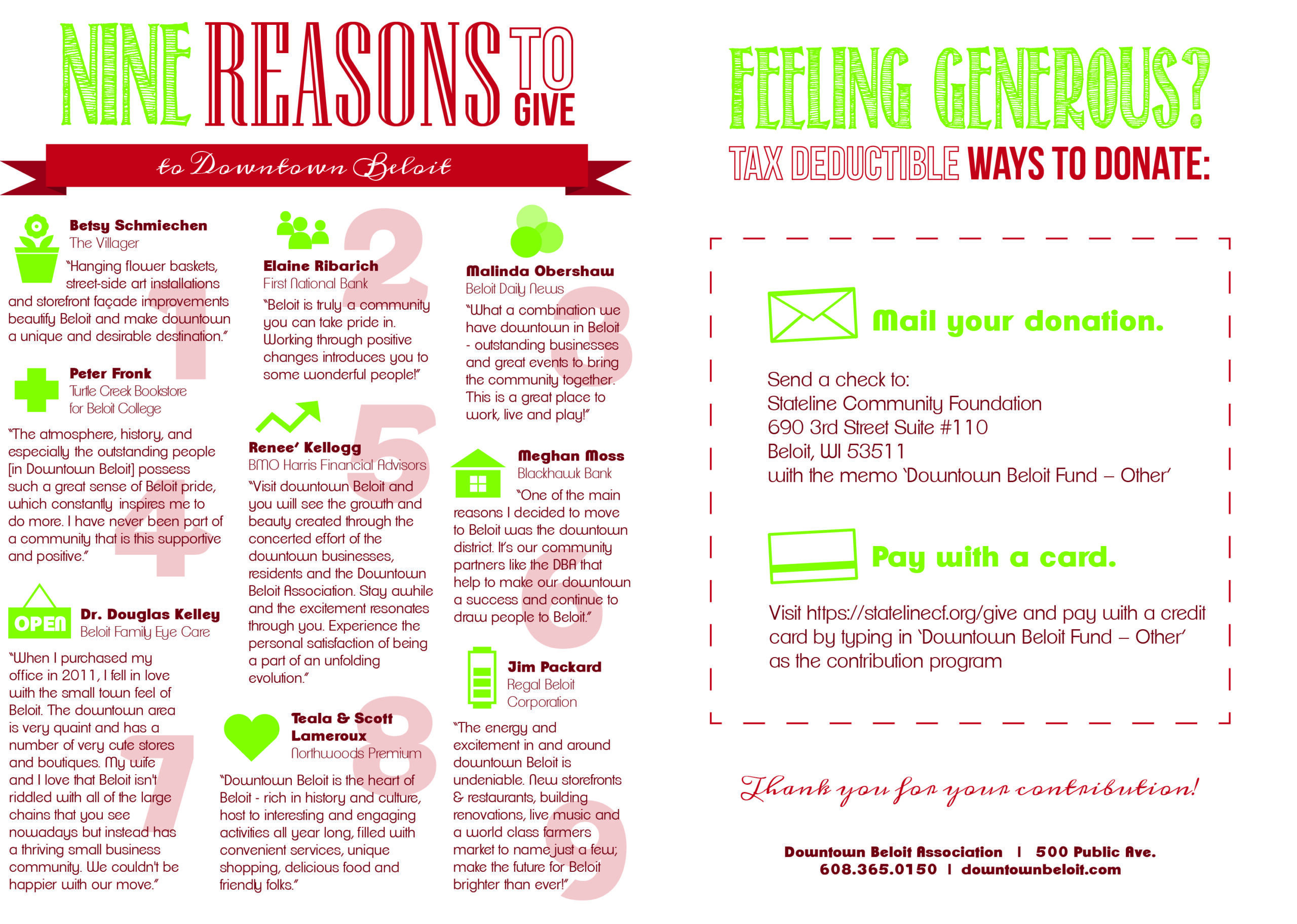 The Downtown Beloit Association captured testimonials from individuals who had given time,
money or otherwise invested in downtown to share their stories in this annual postcard campaign.

Endowments offer a large and relatively evergreen source of funds that many organizations overlook. For many, the biggest deterrent to the creation of endowment funds is the inevitable need to allude to a potential donor’s death. This is one of the reasons that Some organizations have started to refer to such programs as “legacy giving,” since many individuals considering this option are interested in creating a lasting legacy for the community when they are unable to serve personally. While it takes some effort in the short term to establish an endowment fund and also requires patience before the effort bears fruit, legacy gifts are a great investment in your organization’s future.

Making the decision to start an endowment fund is even easier for Wisconsin-based nonprofits since a majority of Wisconsin’s cities, counties or regions are home to at least one and often several community foundations, which have already established the infrastructure needed to set up and oversee an endowment fund on behalf of a registered nonprofit. Under the umbrella of support from the Wisconsin Philanthropy Network, Wisconsin was the first in the nation to establish an accreditation system for community foundations to ensure quality fund management and increase the trust of donors. Many foundations offer advice for establishing and marketing an endowment fund to meet the needs of the organization and its donors.

Endowment funds are typically created so that the original investment exists in perpetuity, while the returns on the fund can be spent in any way that satisfies the intent of the donor. They are most often used to offset annual recurring expenses, allowing donors to ensure that their legacy will be respected. Examples of endowments that benefit Main Street efforts include: 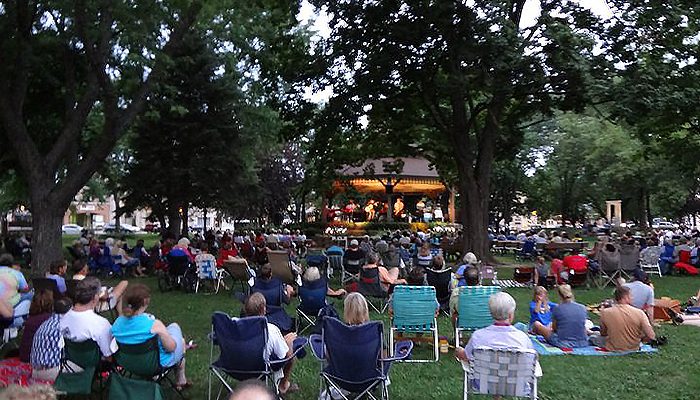 Regardless of which of these methods you try, be sure to thank any new donors that your outreach attracts. In national surveys, 90% of donors indicate that the thank-you letter is the single most important communication, and first-time donors who receive a thank-you within 48 hours are four times more likely to give again. If you need inspiration, here is an example of a community-wide thank-you effort that is guaranteed to solicit an emotional response.