One of the best ways to plan for successful and fun promotional events downtown is to do your homework on what works in other communities around Wisconsin.

The results provide helpful insights on how you can plan and stage successful events that attract shoppers, resonate with businesses and provide fun events for people in your area. They also help you to set achievable goals when planning for your events. 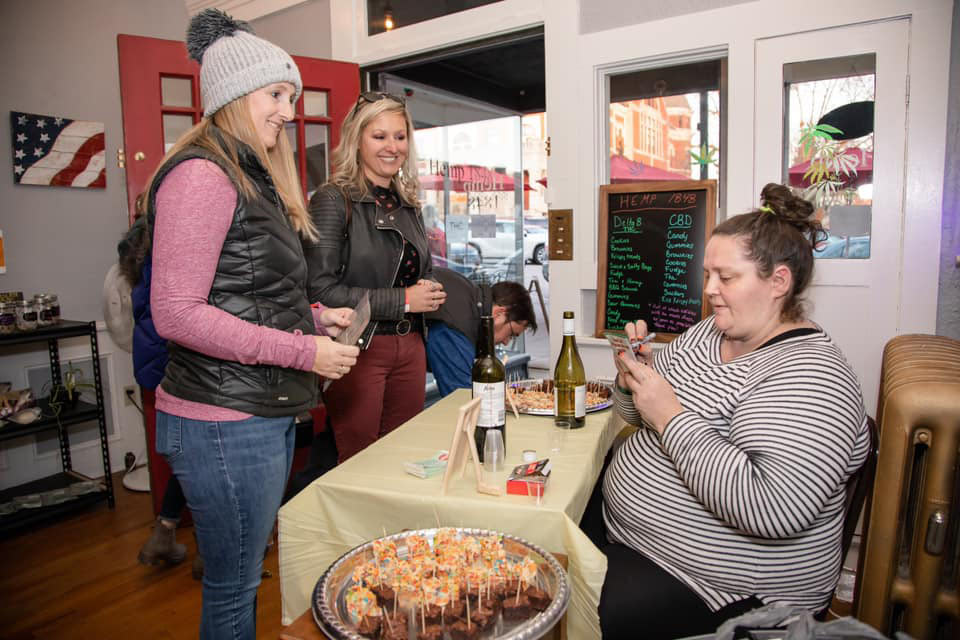 Participants enjoy another stop during the wine walk in Monroe, WI.

Since the passage of legislation enabling wine and beer walks was enacted in 2018, communities have experimented with strategies to maximize event participation and impact.

The law allows for two wine walks per year, and more than half of communities take full advantage of this opportunity.

By contrast, 46% host one wine walk each year, sometimes pairing it with a secondary beer or seltzer walk. Fall is the most popular time of year to host a wine walk, followed by spring, with summer and winter being least popular.

Sixty-nine percent of communities had between 12 and 20 businesses participate, while 15% have 21 to 25 and the remaining 15% had more than 26 participating businesses.

Survey results showed the average ticket price was $28, and communities varied on cost per ticket, with a range of $15 to $50.

Not all communities collected data on where wine-walk attendees live. But half of the communities that kept this data reported that a majority were locals, while 38% of communities attracted mostly non-locals, and the remaining 13% of communities had a 50-50 mix of locals and non-locals attending.

Data shows that the average net revenue per community was $3,800, with individual communities reporting total net revenues ranging from $500 to $8,500.

Communities were also asked if there was anything unique or innovative that makes their events successful. Responses included: providing a nice selection or higher quality of wines; creating outdoor event spaces as part of the walk and hosting an event after the wine walk with raffles and music—allowing people without tickets to still attend and enjoy a fun event. Other tips included: establishing a selfie spot at registration, focusing on food pairings, having disposable cups and giving a swag bag with commemorative wine glass, having a local winery sponsor and focusing on Wisconsin wines, partnering with a charity and sharing with it a percentage of the event proceeds, offering private tastings prior to the event for host businesses, hosting the two annual events on different days and times to attract different crowds, and offering beer options. 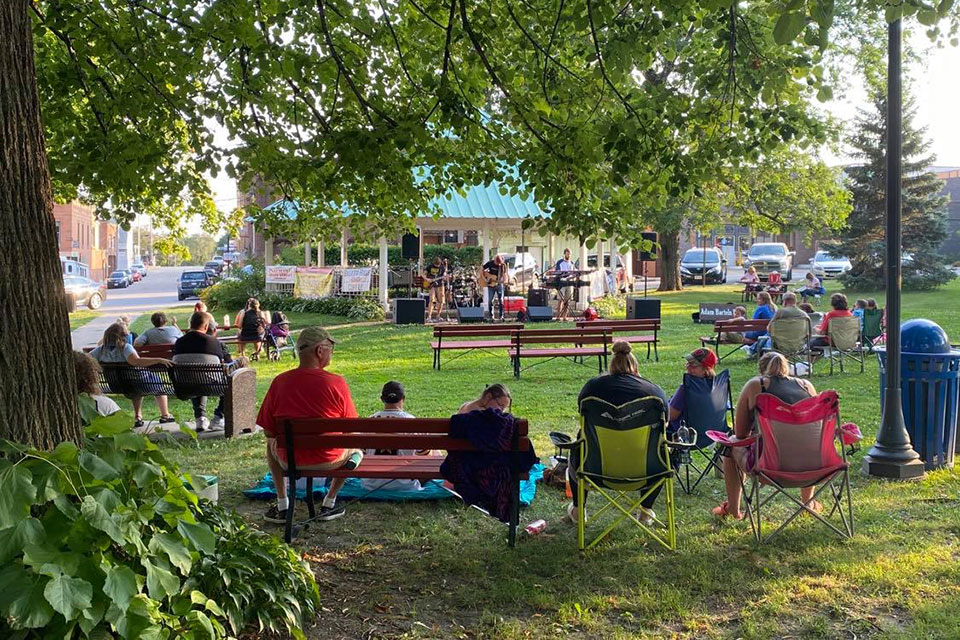 Community members from Platteville, WI enjoying a concert in the park.

Music-in-the-park events are another popular way of attracting visitors to downtown during evening and weekend hours all summer. By offering a recurring event with diverse acts, locals and visitors can plan to attend music events that appeal to them.

More than half of the communities responding to the survey hosted 10 or more events each summer, compared to 46% that hosted less than 10 per summer. In general, smaller communities are averaging seven events and larger communities average 12 events.

Wednesdays are the most popular day of the week to host music-in-the-park events, with one-third of respondents scheduling events on that day, with Thursdays and Saturdays being close second at 22% each, and Fridays and Sundays being the least popular at 11% each. Weekdays are a popular choice, because the events are less likely to compete with larger community events. That also helps boost traffic downtown on what would otherwise be a slower night for businesses.

Two-thirds of communities said they had vendors and/or businesses participate in the event series, and of the communities that had vendor/business participation, the number of vendors/businesses averaged seven, with no difference between smaller and larger communities.

Of the participants, 56% sold food, 33% were crafters, 22% were artists, and classes and alcoholic beverages each came in at 11%. Most communities have more than one vendor type, so the total does not add up to 100%.

In addition, 44% of communities charge their vendors and businesses to participate, with one community charging food and beverage vendors 15% of their net profits. Fee structures include both per-event and seasonal rates.

Communities offered some tips and innovative approaches for the events, including providing a beautiful setting with local food and beverages; emphasizing fun things for kids to do, such as nighttime kickball or bounce houses; hosting concerts more often throughout the warm season; and keeping a banner in place announcing upcoming concert dates and bands for visitors to see throughout the summer. They also suggested adding popular bands to the line-up to increase attendance and beverage revenue; partnering with civic organizations to market and program concert dates, such as a police department for a Community Safety Day; including a 50/50 raffle; putting out yard games; providing an indoor rain location for consistent weekly concerts; and booking bands directly instead of using a booking agency. 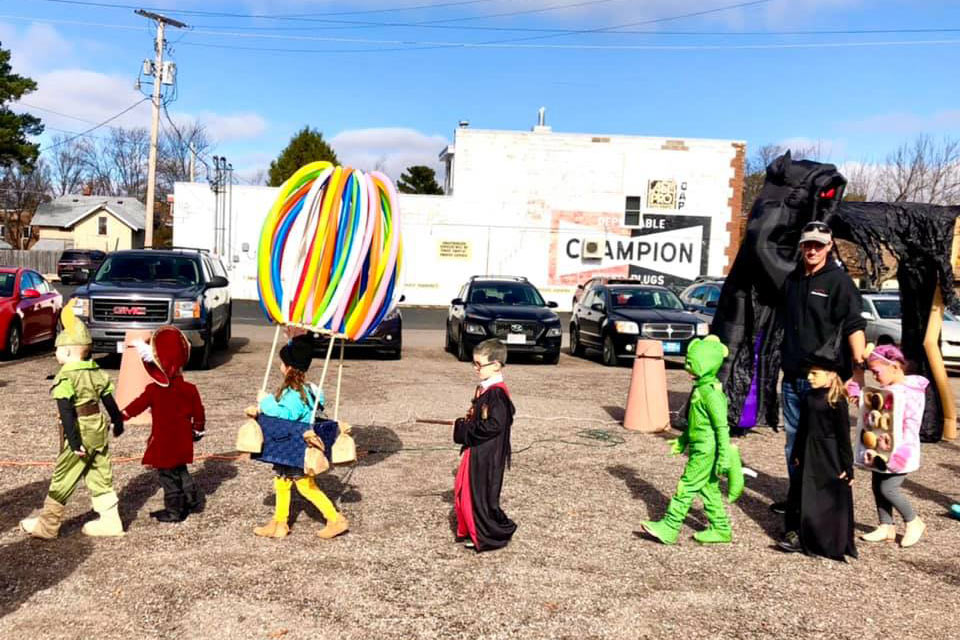 Respondents offered an array of suggestions for staging successful Halloween events. They included partnering with other organizations; organizing scavenger hunts for the kids to go into each business; hosting a costume contest; and encouraging downtown movie theaters to provide a free movie as part of the event. Other suggestions included working with the local fire and police departments for event traffic control; encouraging businesses to have a presence on the street; showing a kid-friendly Halloween movie in the park; hosting additional events in the downtown or downtown park that coincide or complement the event; and having costumed characters handing out candy. And other communities suggested hosting a haunted house or tour; including jump houses and giant inflatables; including a DJ and music during the event; shutting down the main street downtown; encouraging individual businesses to stage their own activities; hosting a themed wine walk for adults in the evening following the trick-or-treating event; and inviting outside businesses to participate, pop-up shop style, in closed businesses or vacant buildings.