It seems there are few areas of life that aren’t being revolutionized by technology, and travel is no different. People rarely read maps anymore, relying instead on GPS to tell them where to go, when to turn and how far to their destination. By and large, communities have developed their wayfinding signage for the traditional arrival method of driving to, and parking near, their final destination—yet now, we have changed the way we get to places, with bike paths and bike lanes throughout many communities, car share programs expanding, and more people living downtown and therefore arriving at nearby destinations on foot. In general, multiple transportation options are available beyond personal cars, and the rise of utilities such as Google Maps, Yelp and GPS leaves us asking: what role is there in today’s historic downtowns for communities’ wayfinding signage systems?

Even with advances in technology and the rise of home offices or coworking spaces that aren’t location-dependent, people still want to live in, work in and visit neighborhoods with character that have a unique sense of place. Hence, these districts still need to be distinguished, not only with historic buildings and exciting businesses, but with wayfinding signage to help people find these landmarks. Signs are tools that help define a downtown district and let people know they’ve arrived at, or are heading for, someplace special. They can also inform people, especially visitors, that there is more to an area than the single destination they may have come for. 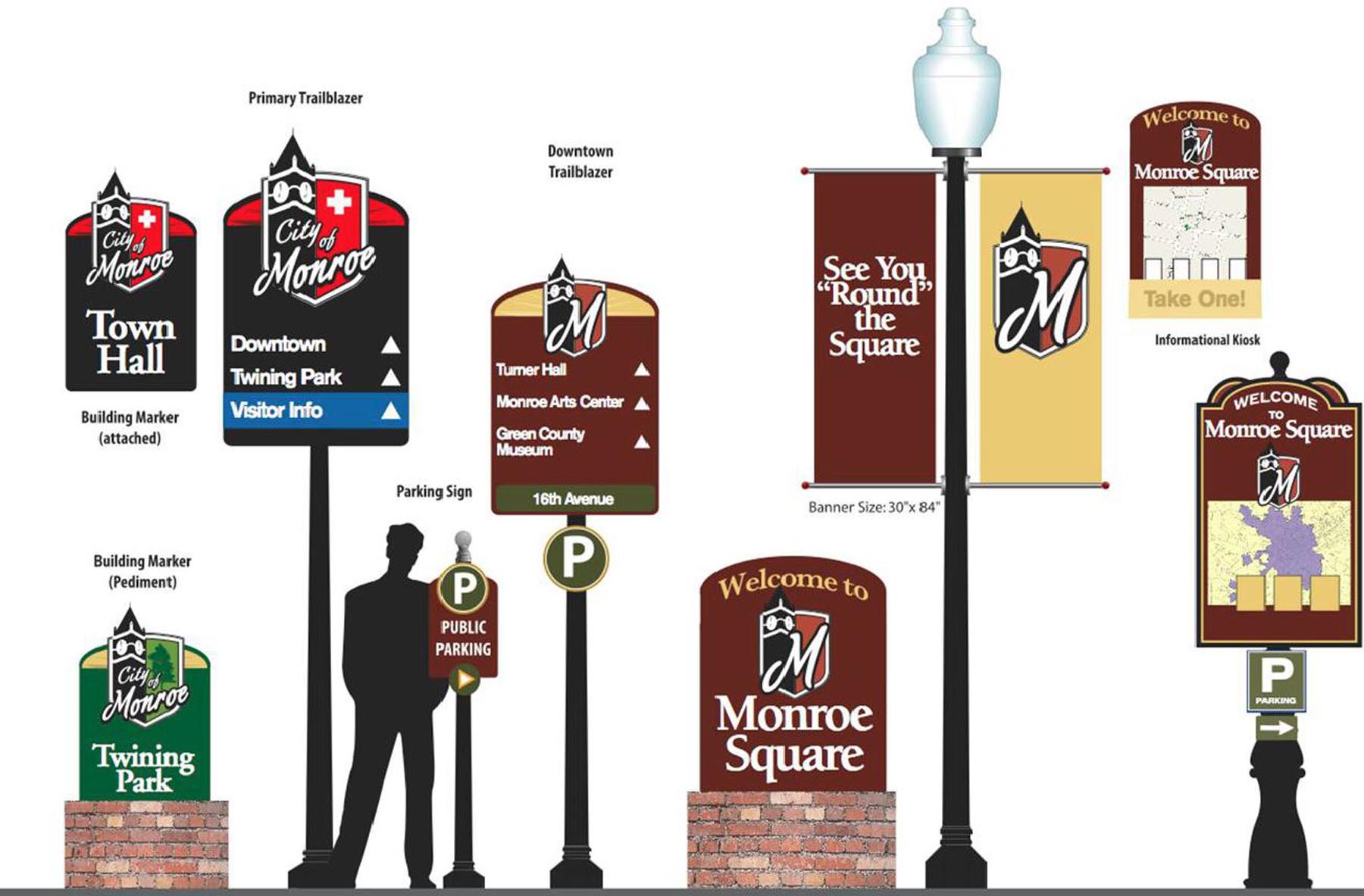 Elements of a comprehensive wayfinding signage system in Monroe, WI (by Arnett Muldrow)

Most wayfinding signage of the past was geared primarily to automobile traffic and was therefore large enough to be seen from a distance and at varying speeds. Since most people live outside of downtown and highways had long since been moved to bypass the downtown district instead of bringing people through the center of town, signs were needed to let people know that a historic commercial district existed just blocks away, and to guide them there once they exited the highway. This is still true today, especially since most GPS navigation systems send you on the fastest route to a destination, and might skip downtown altogether. Thus, wayfinding signage is still relevant, and what follows is a discussion of the different types and recommendations for how to best use each one.

Directional signs are what most people think of when discussing wayfinding signage. This category typically lists four to five different points of interest per sign, with arrows for each. Lettering is usually a minimum of 3 inches, all uppercase, with the corresponding arrows the same size. The overall sign face is typically in the range of 36 to 42 inches wide by 60 to 66 inches high and is mounted on a pole.

Entrance signs are often large landmark-style signs surrounded by landscaping. These can mark an entrance to a community or to a specific neighborhood or district. They should be simple in design, with as few words as possible. Try to avoid cluttering them with individual signs of various service clubs. The size of the sign will depend on the width of the roadway, the distance from the road, traffic speeds and the size of the community or district. The smallest size recommended for the sign face would be 48 inches wide by 48 inches tall. If a larger sign is necessary, staying within 96 inches wide by 48 inches tall allows the sign panel to be made from a single sheet of material, thus saving in cost and complexity. 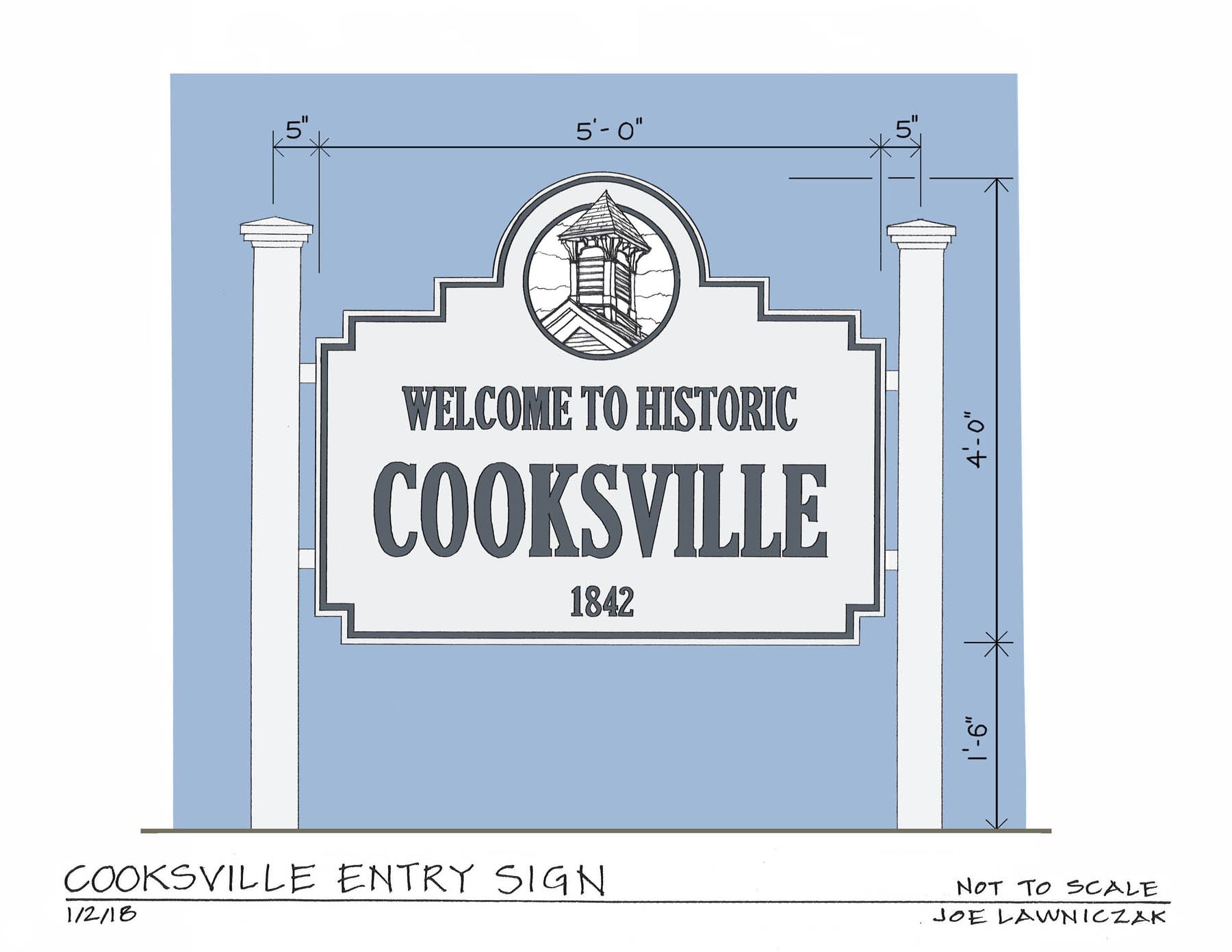 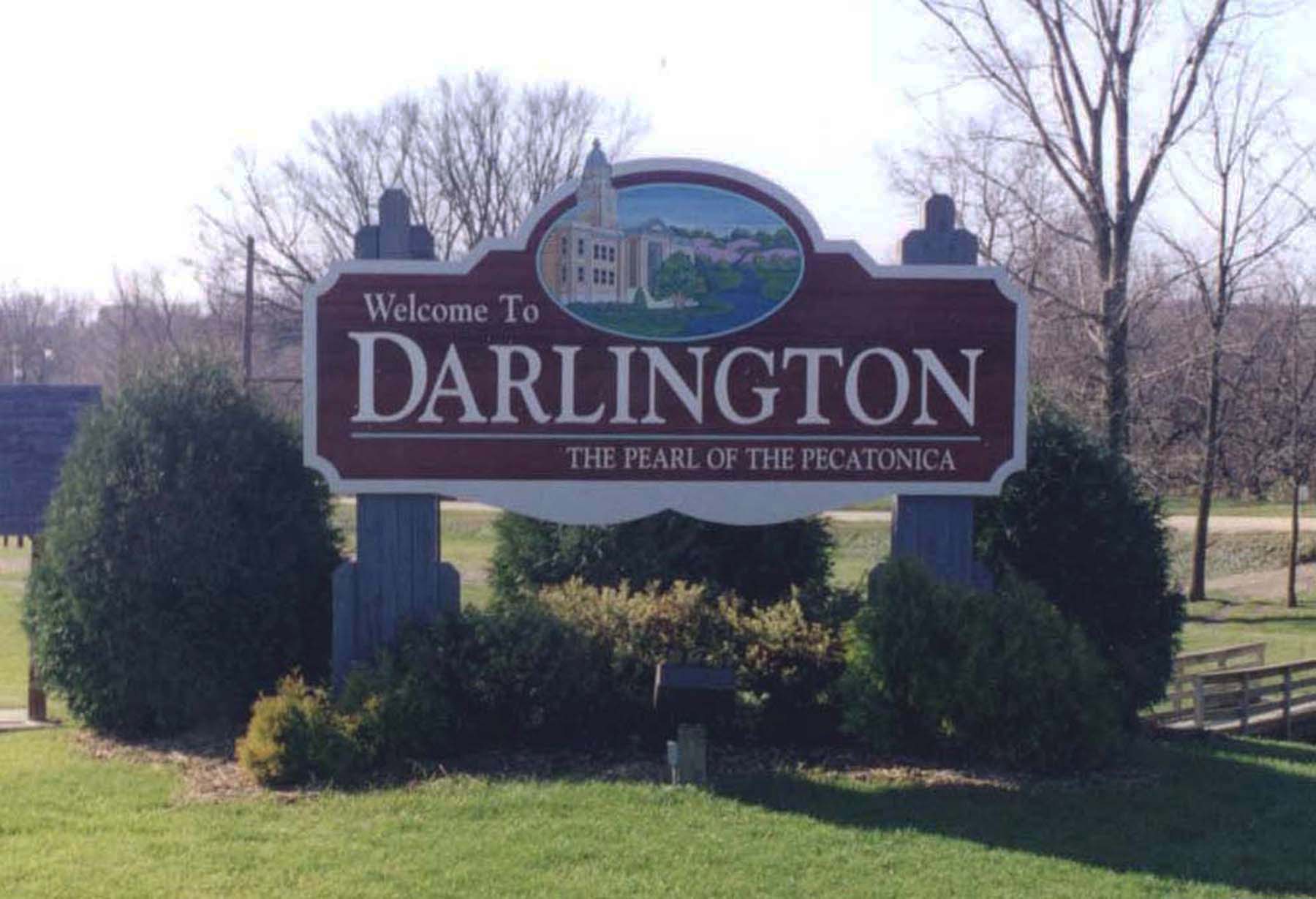 Landmark-style entrance signs, like these in Cooksville, WI, and Darlington, WI, are not only effective at letting people know they’ve arrived somewhere, but can also slow traffic on highways.

In some communities, murals on the sides of buildings can act as gateway signs for the district. Typically these are welcome murals or advertise the entire district rather than one individual business. If rendered in a historic style, they don’t need to be changed when updates to the downtown brand occur. 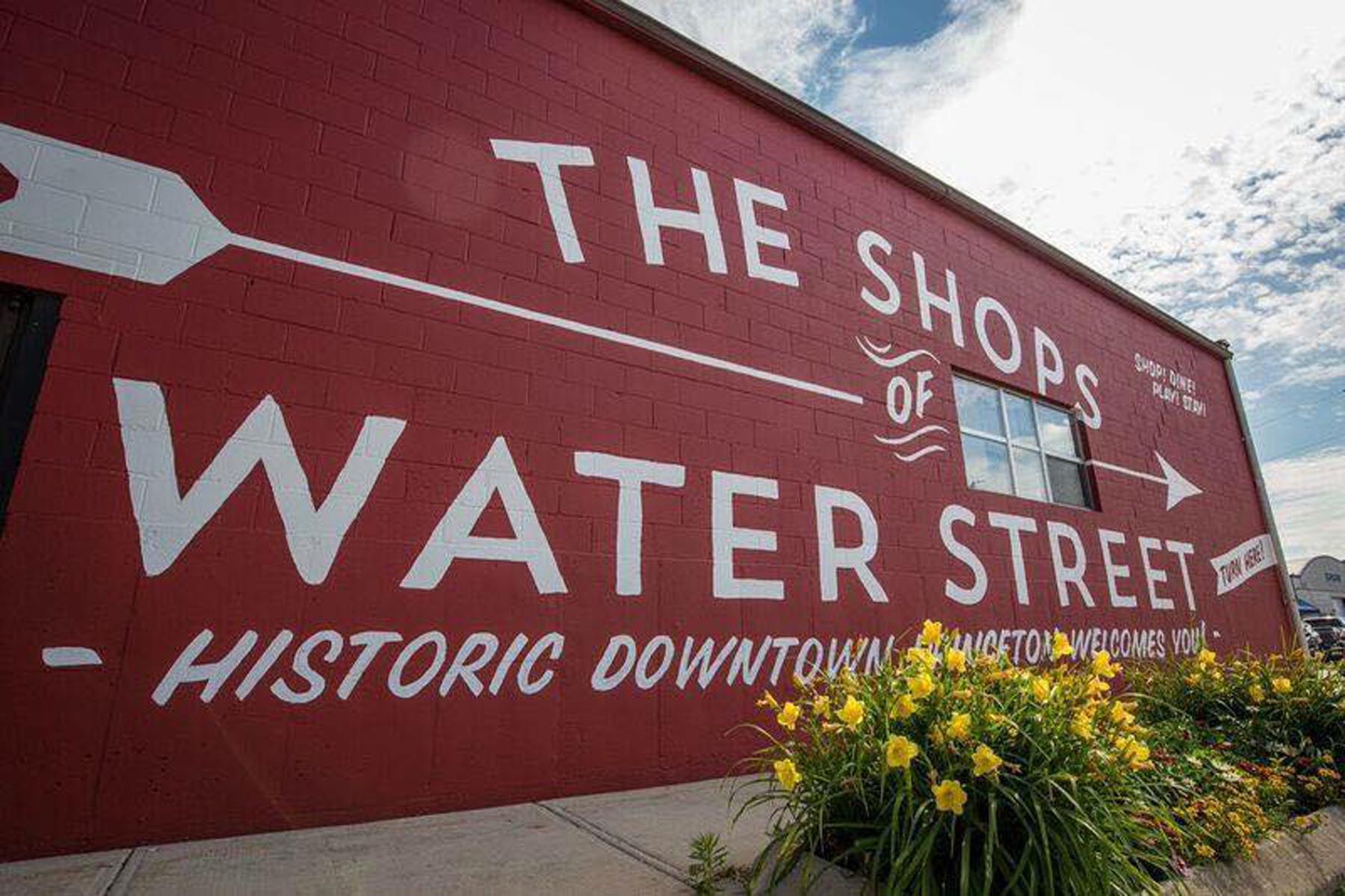 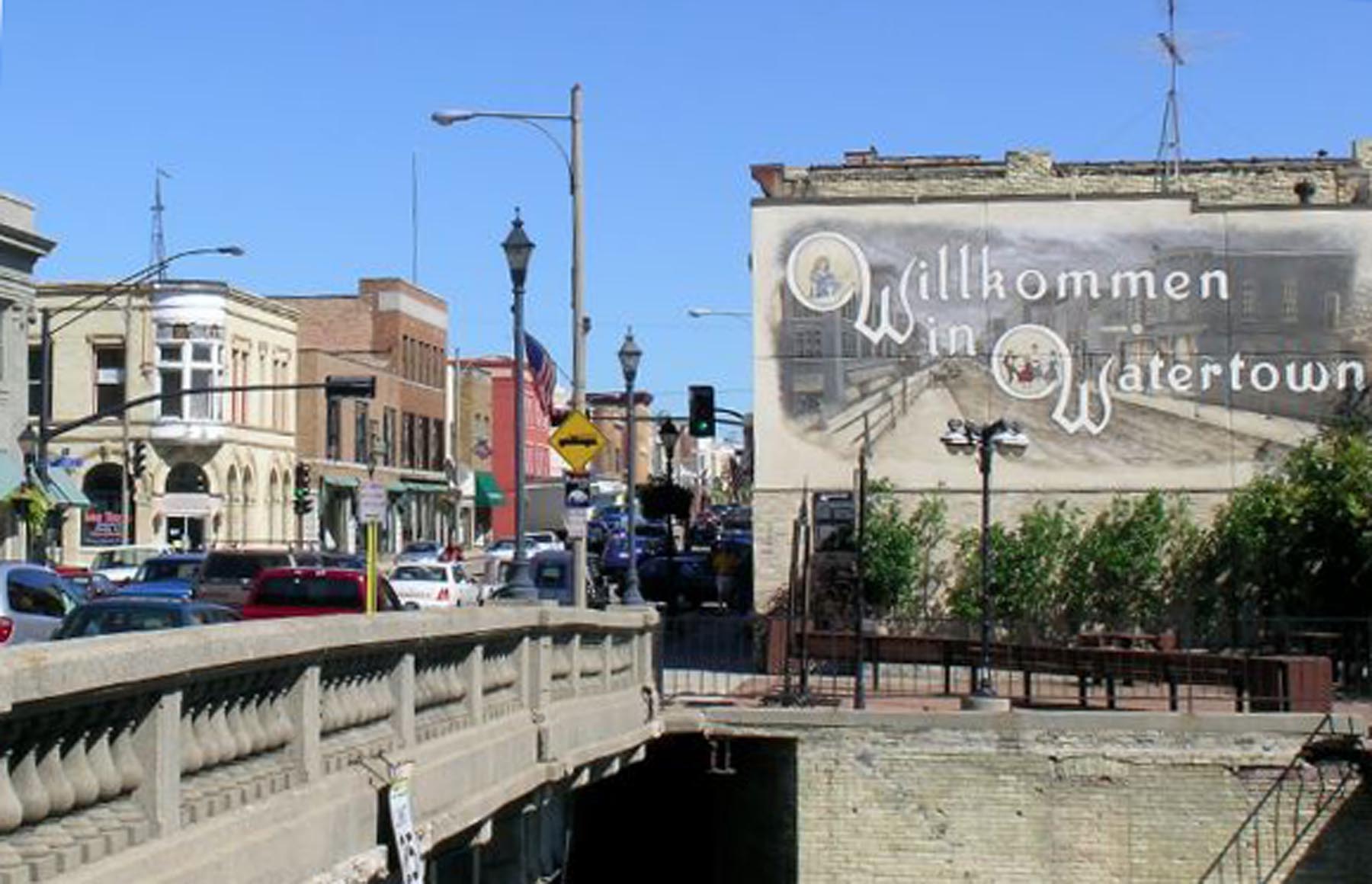 In some cases, a grand gateway might be necessary to attract people off the highway. Gateway features might include large stone pillars, landscaping and/or an archway. This type of feature lets people know they’ve arrived and can be a great feature for visitors to take selfies in front of and post on social media, a simple and highly effective marketing tactic. 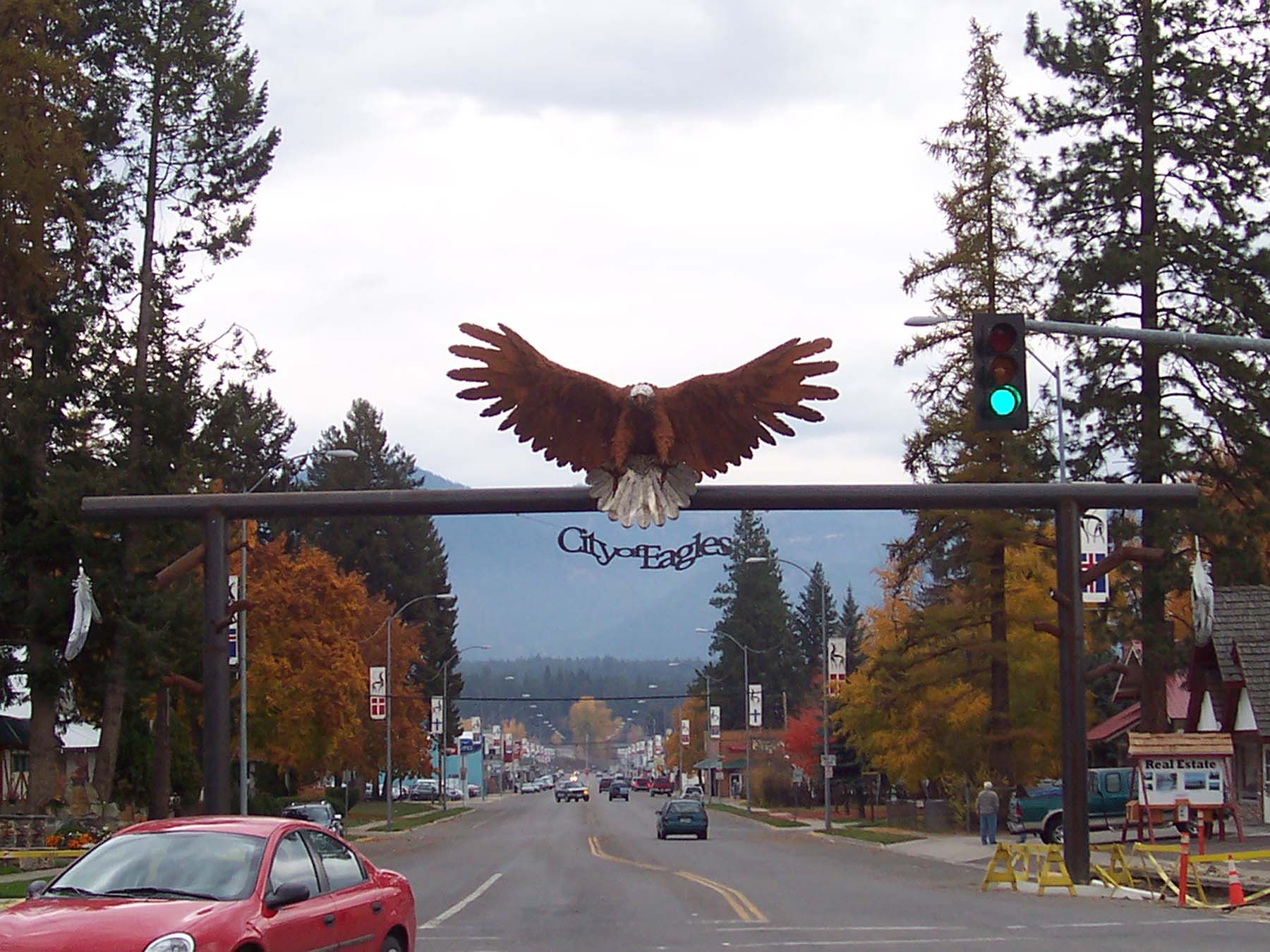 Entry features such as arches, like these in Waupaca, WI (left), and Libby, MT (right), can call attention to a downtown area, especially if it’s not easily visible from the highway, like in the Libby example.

Today, many communities are accentuating their wayfinding by adding signs geared toward pedestrians and bicyclists. This category of signage leads people to trailheads and recreational areas as well as typical community landmarks. Additional signage is used along sidewalks and trails, listing the number of blocks, steps, minutes or feet to a destination. These sign types can be smaller in dimensions and font sizes, and perhaps more fun and quirkier in design. 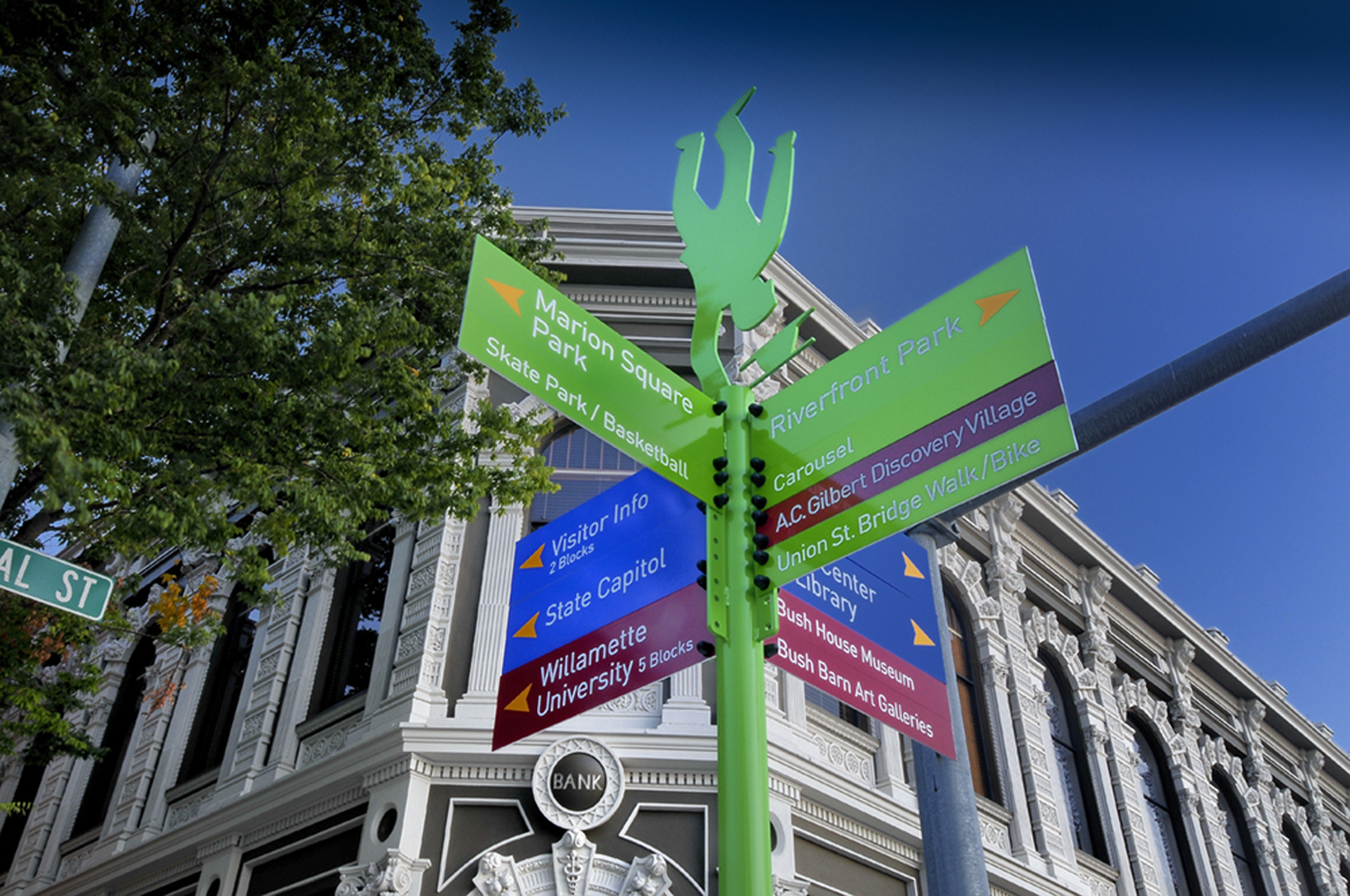 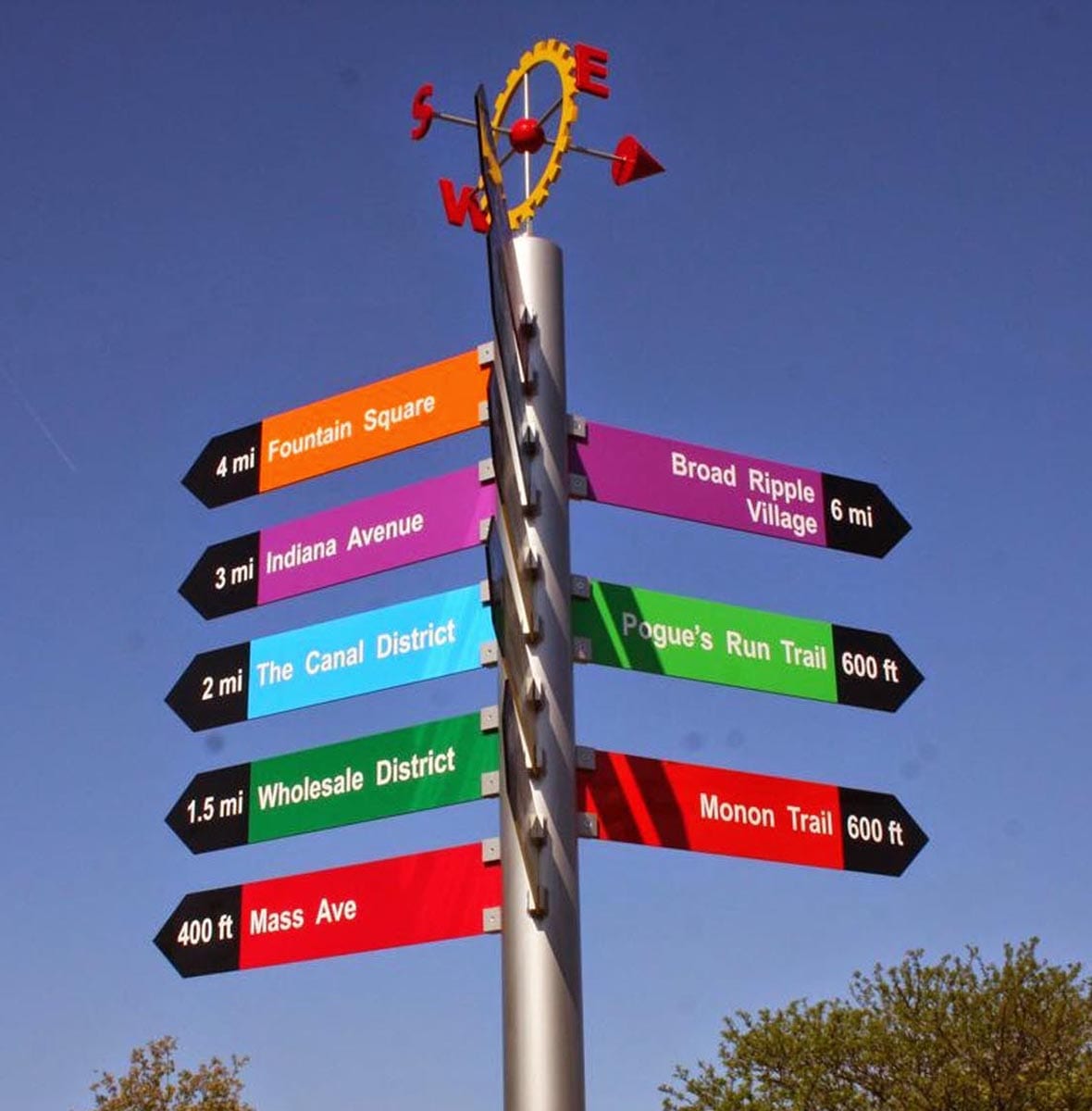 Colorful and effective pedestrian/bike signs in Salem, OR (left), and Indianapolis, IN (right)

Parking is often a concern in historic commercial districts—but in most cases, it’s not a lack of parking, but the fact that people don’t know where the public parking is. Simple parking signs directing people to these spaces (often surface parking lots) can be very effective, and landmark signage at the individual parking lots can help to further continue the wayfinding system. 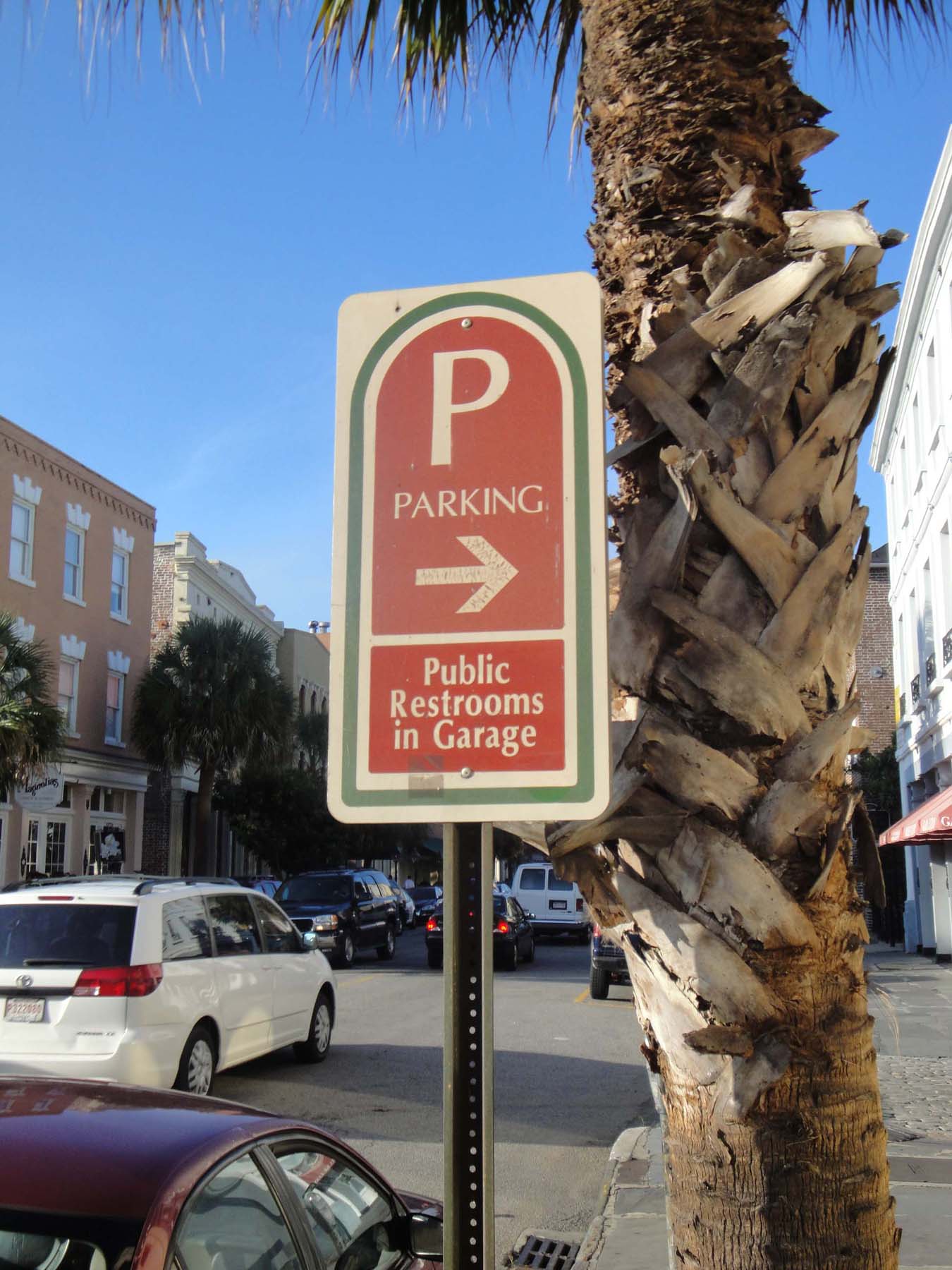 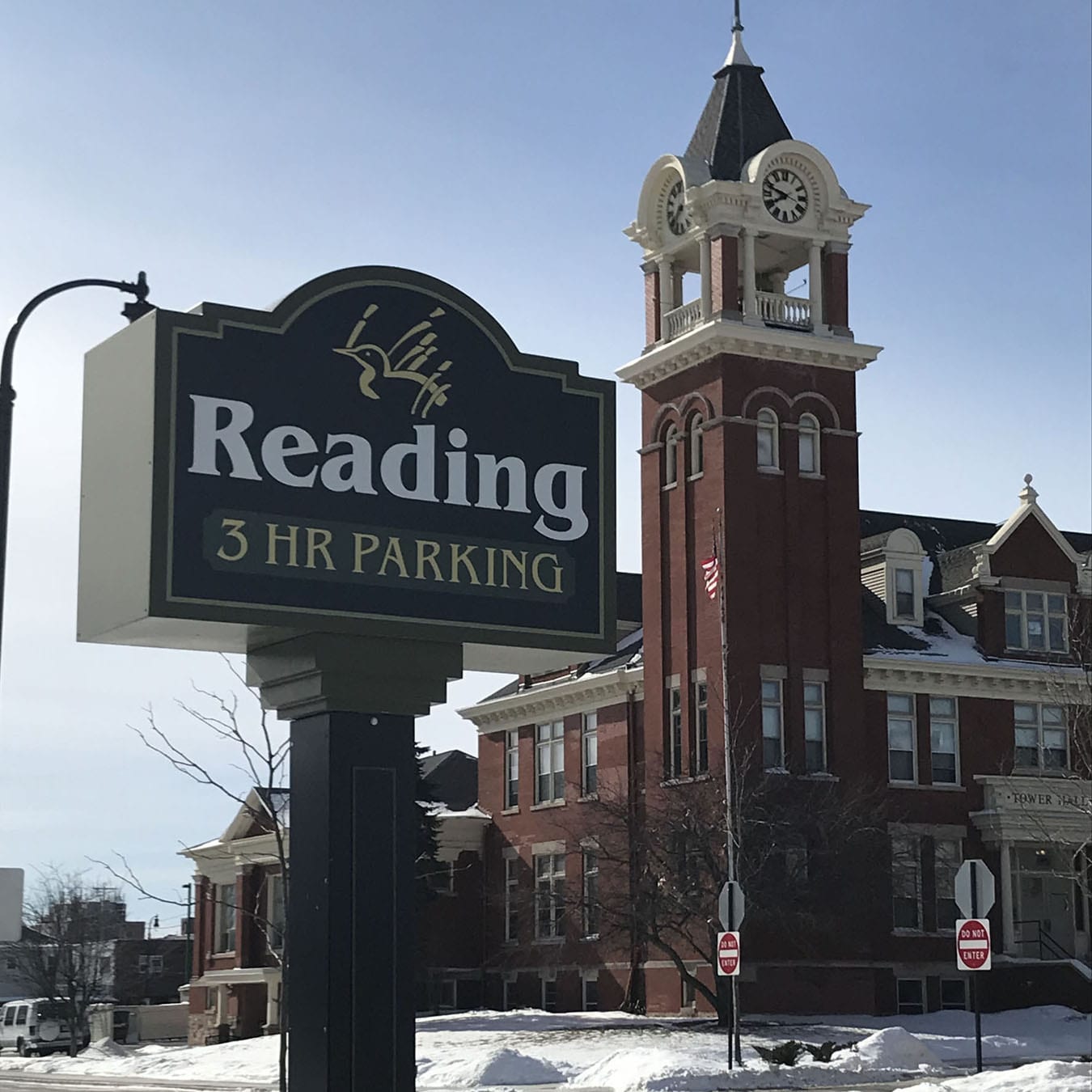 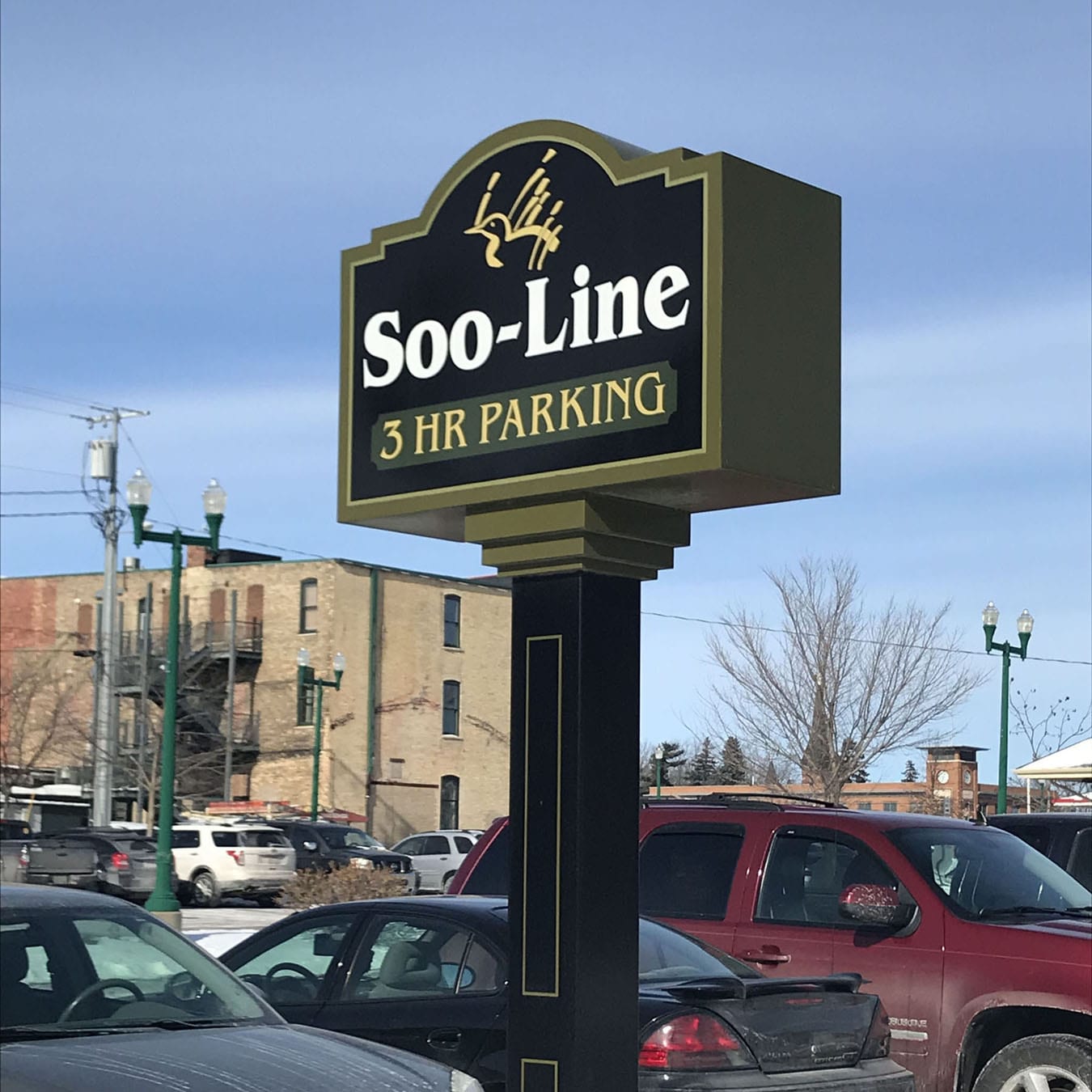 Simple parking signs like the one on the left in Charleston, SC, lead people to parking areas, and signage at the parking lots, like these in Marshfield, WI, let people know they’re in the right location.

In some communities, attention focuses on the main street, leaving businesses on side streets virtually invisible. While calling out individual businesses is typically not allowed on permanent wayfinding signs, some communities have used sandwich board (or A-frame) signs to call attention to these businesses. The sign is set out on the corner each morning and taken down each night. The temporary nature of the sign usually allows for more freedom from the constraints of local ordinances. 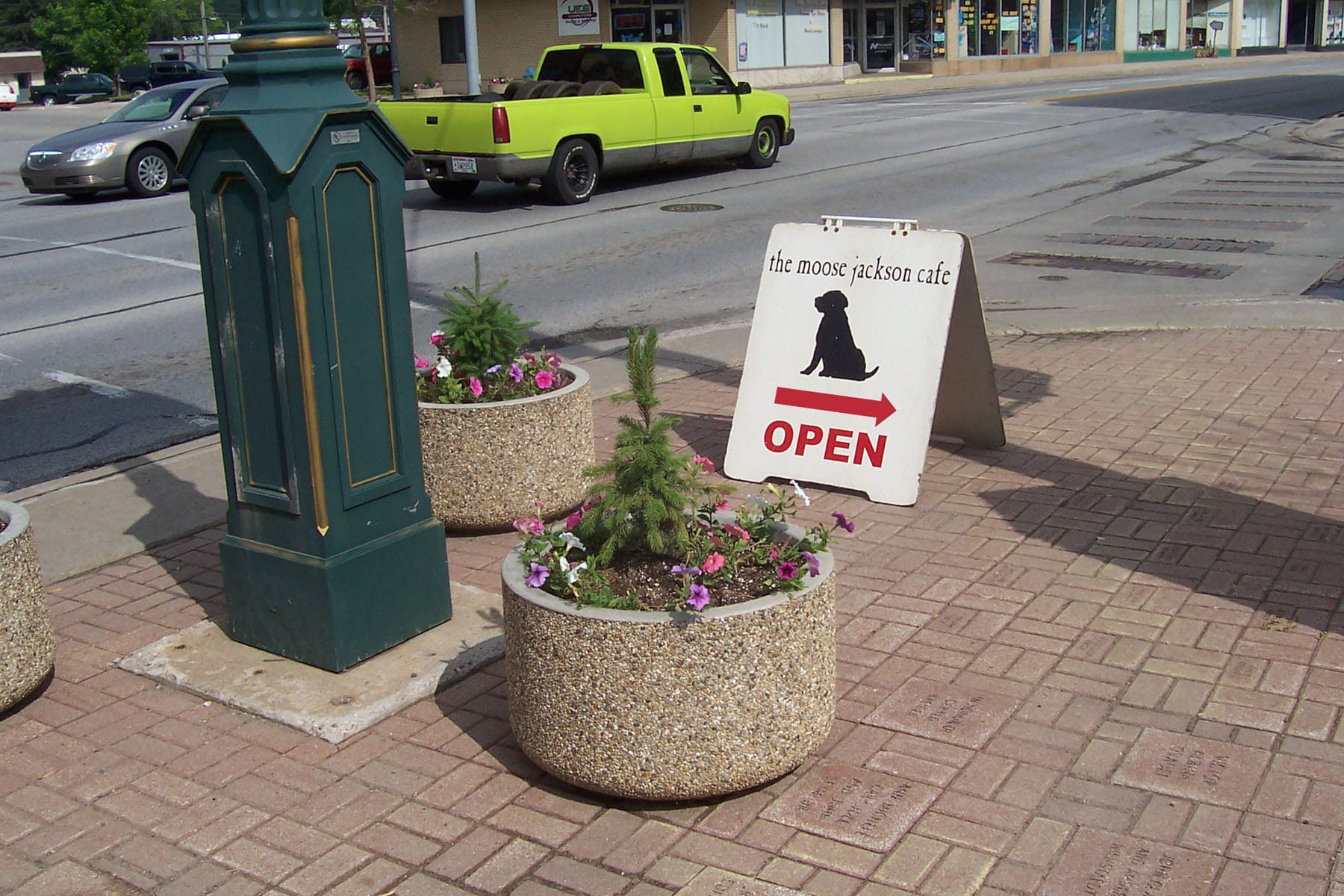 This simple sandwich board sign in Iron Mountain, MI, directs people to a business on a side street.

Some communities have even used lighting or signage in the pavement to guide pedestrians to important areas of a downtown. This can be an expensive approach, but a very attractive and unique one that can make a lasting impression on people. 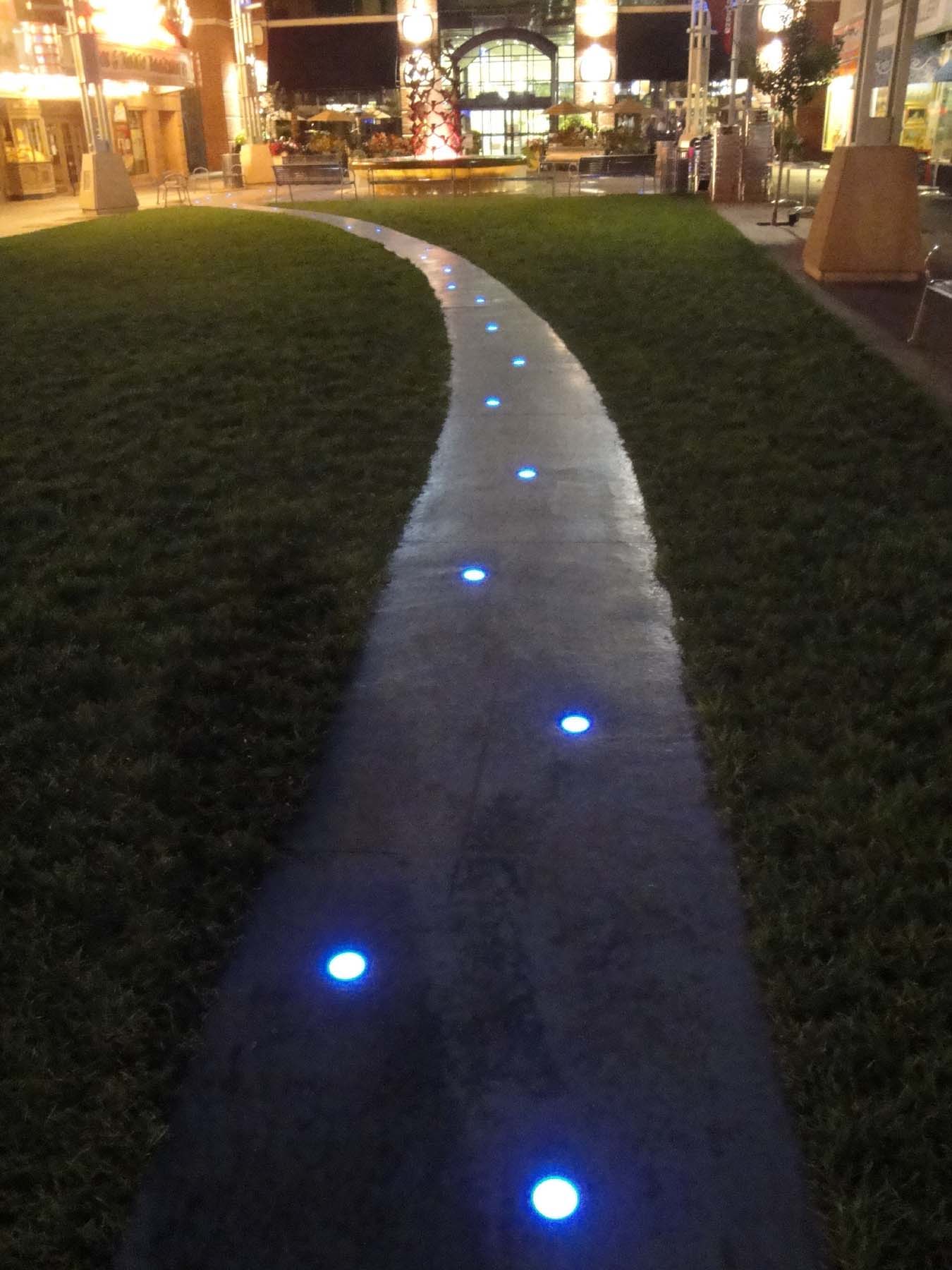 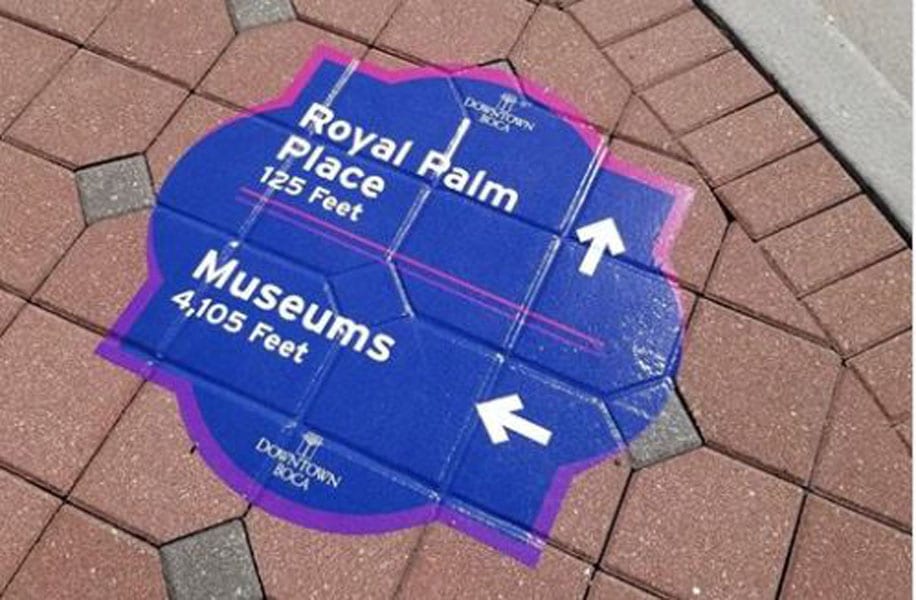 Elements installed into a walkway, like these lights in Rochester, MN, and this painted sign in Boca Raton, FL, can be effective and memorable as wayfinding devices.

Banners and street signs are an important part of any wayfinding system. Similar to other sign types, they can help mark the boundaries between a community’s different districts. 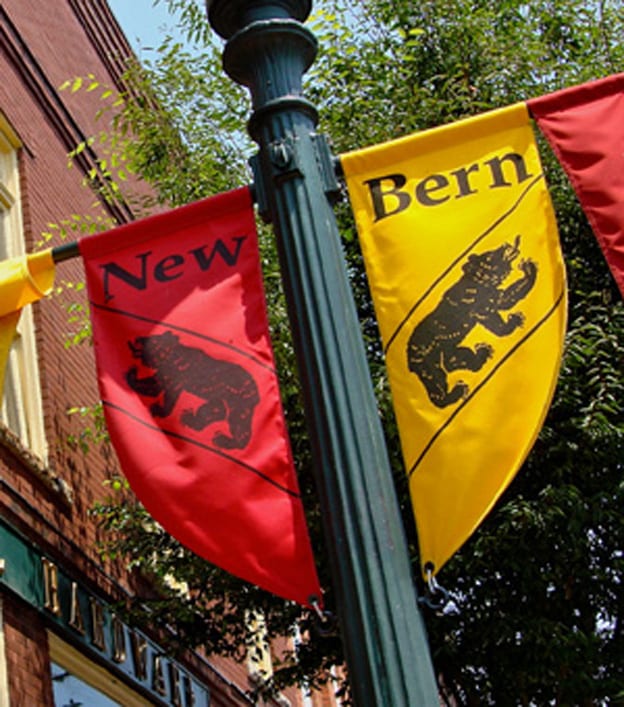 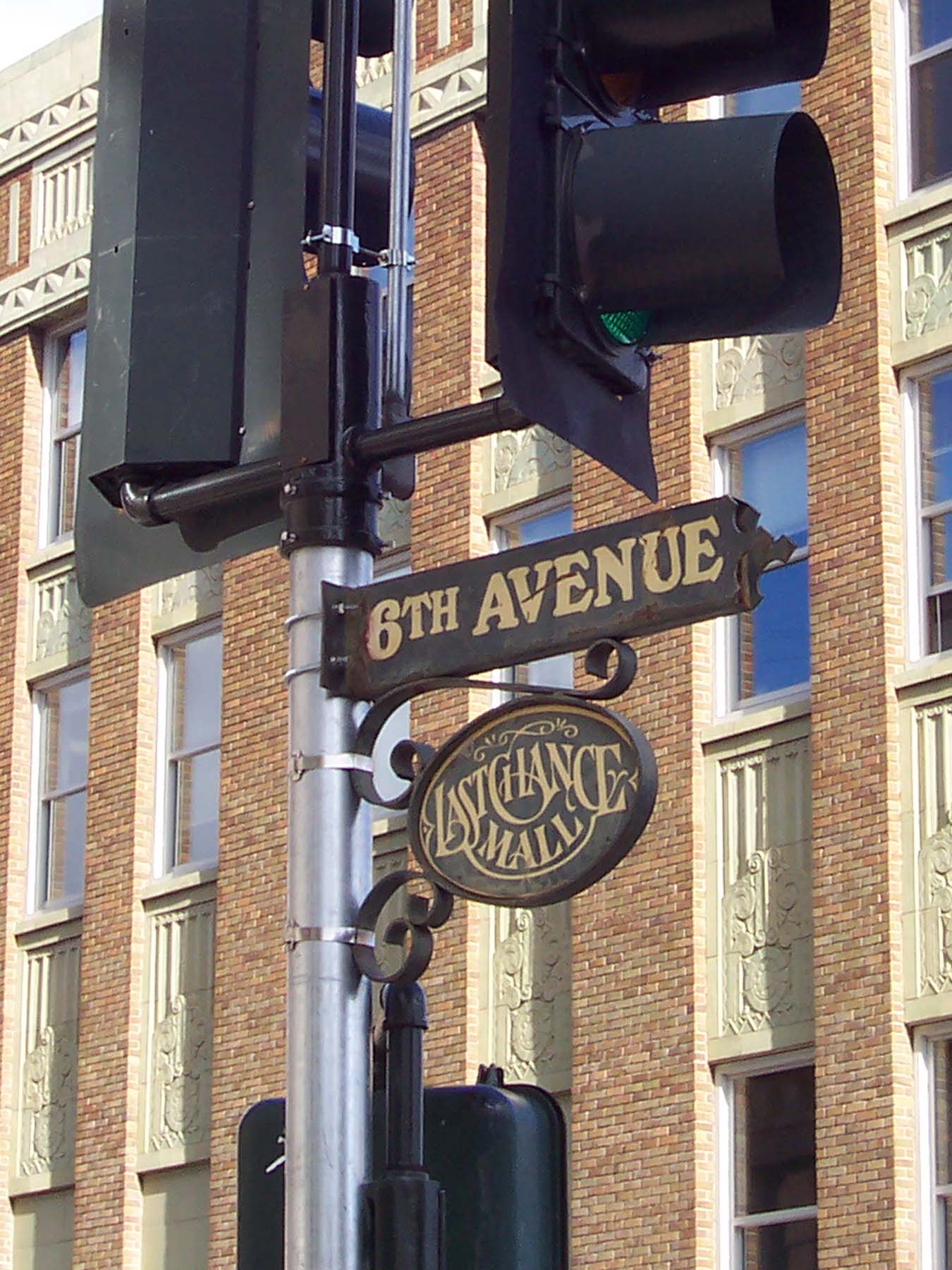 Streetscape banners like these in New Bern, NC, and unique street signs like this one in Helena, MT, help to distinguish one area from another.

Most people don’t think of things like outdoor merchandising or sidewalk café seating as wayfinding, but these are both effective ways to let people know they’ve arrived at someplace vibrant and special. These features can turn an ordinary street into a destination. 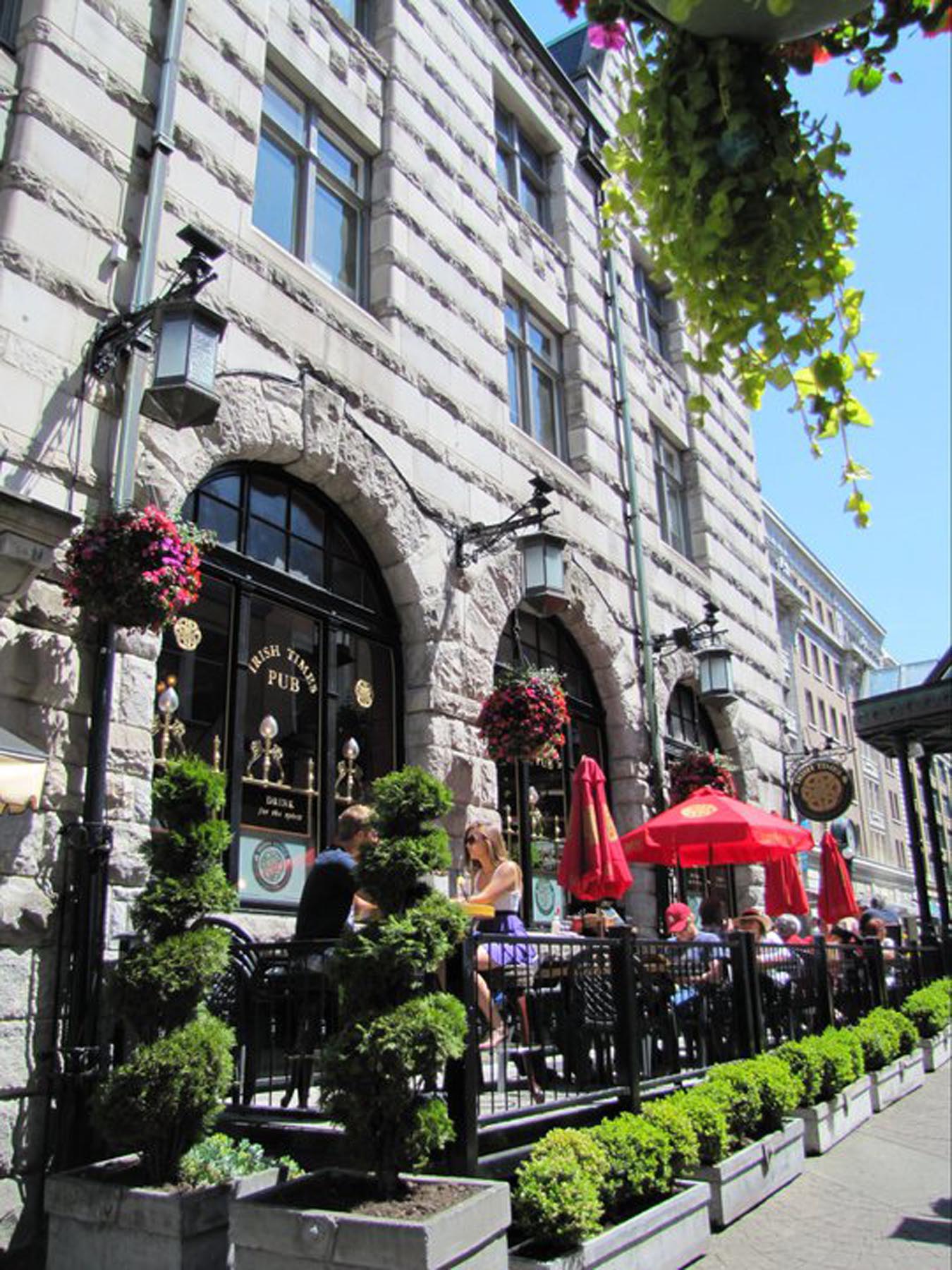 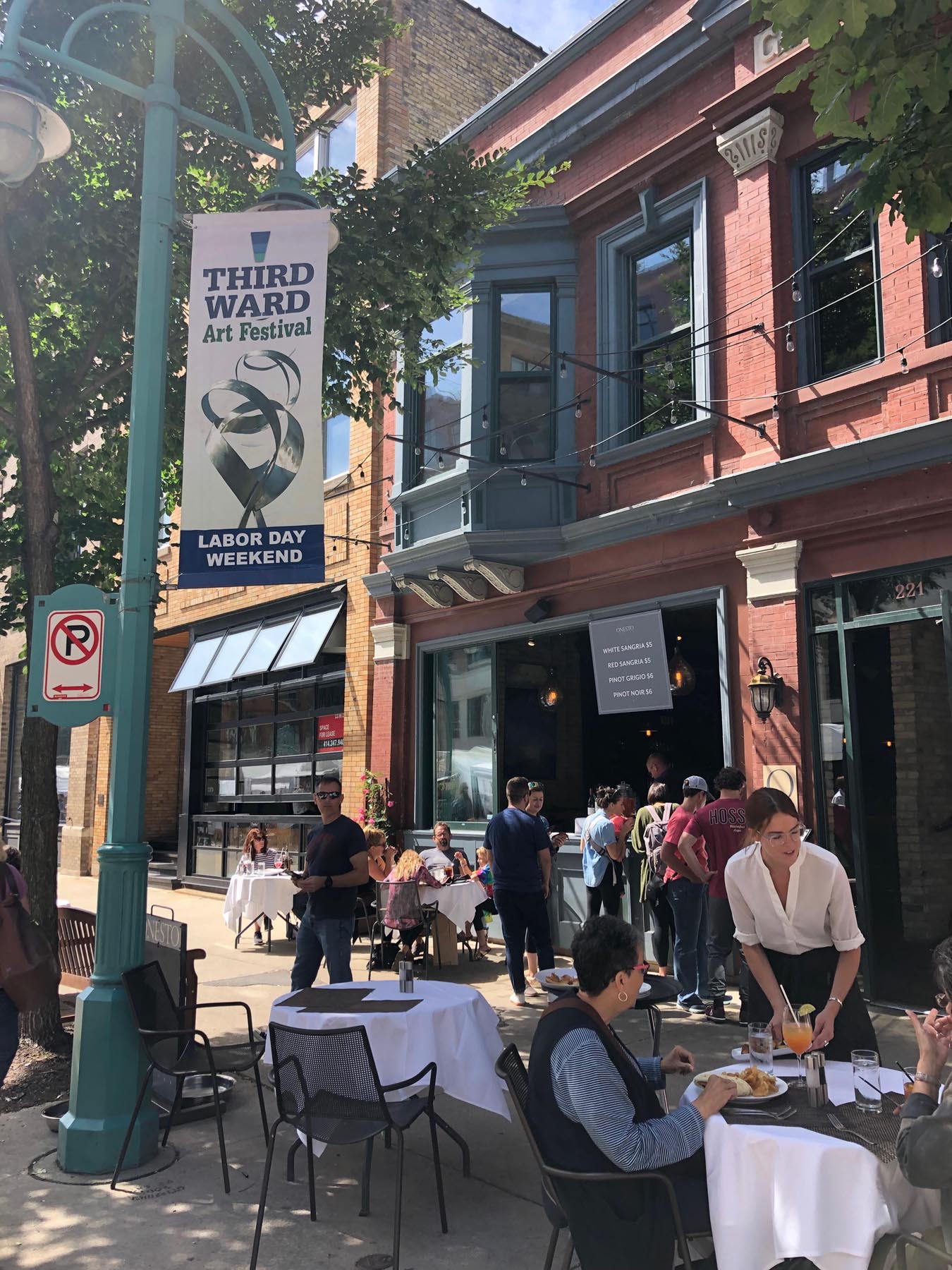 Outdoor dining, like these examples in Victoria, BC, and Milwaukee, WI, is extremely effective at making a district feel vibrant, which helps to distinguish an area the same way unique wayfinding signage can.

Placement of signs is often the most difficult part of implementing a wayfinding system. Not only do the signs need to be placed so they effectively lead people to their destinations, but most end up on either public or private property. This means permits, approvals, easements and more will need to be obtained for each individual sign location. This can become even more difficult if they are along a state highway.

In cases where the proposed location of a sign is not on a state highway, but is on private property within a local jurisdiction (town, village or city), you will probably need an official easement signed by the property owner allowing the sign to be placed there and allowing access for maintenance as long as the sign remains. Then you will need to apply for a permit from the local municipality. Typically, you can include each sign location in the one application. In cases where allowing a sign on a particular site would require a variance or a conditional use permit, you may need to solicit a signature of approval from every property owner within a specified radius of the proposed location. Consult with your local zoning administrator from the beginning to stay abreast of the requirements. Be prepared to adjust your original plans several times if property owners do not grant consent for a particular site.

As noted earlier, the permit and approval process can get complicated if any of the proposed locations are along a state highway. State highways almost always maintain a right-of-way where objects such as buildings, fences, utility poles and signage cannot be placed. On country roads, as a very general rule, that right-of-way is often 32 to 33 feet from the centerline of the road. In downtown areas, that right-of-way is often from building face to building face, so it even includes the sidewalks. Keep in mind that there are multiple classifications of state highways. Some may be major arteries, while others may be secondary roadways.

Wayfinding signage along all state highways and most local roads is strictly regulated in size and content. As a general rule, this type of sign cannot list any individual business. Instead, it should be limited to directing people to a historic downtown or commercial district, points of interest, historic sites, government buildings, libraries, schools, community centers, museums, public parks, recreational areas, parking, or the way back to major transportation routes.

A great resource for wayfinding sign design parameters is a publication called the Manual for Uniform Traffic Control Devices. Begun in 1948, with the most recent version created in 2009, this guidebook is used by all 50 states and covers a vast array of sign types. Beyond consulting the book, it is recommended to work with your local zoning administrator and a regional representative from the state Department of Transportation from the beginning of any signage project.