One of the primary community development tools available from WEDC, these grants have benefited 194 projects in 127 Wisconsin communities. Their impact has proven instrumental to the health of downtown and commercial districts from one end of the state to the other.

CDI Grants provide up to $250,000, or 25% of eligible project costs, for construction, renovation and other physical improvements for projects that incorporate a commercial element. Projects are selected and submitted by the municipality, with the grant funds passed to the project through a development agreement.

Many of our participating Main Street and Connect Communities programs have used these grants to spur key investments related to adaptive reuse, historic preservation, infill development and the development of critical business and civic amenities.

Looking back on a nearly 10-year track record of success, it’s worth highlighting some examples of projects in each of these categories.

Many communities struggle to find new uses for historic properties that have outlived their original purposes. Warehouses, manufacturing facilities, office spaces and other single-purpose buildings that became obsolete for their original purpose have found new lives that benefit their communities. In other instances, key historic buildings require renovation and restoration to update mechanical and address accessibility and safety concerns, setting them up for their next century of life. Even if these properties are not eligible for Historic Preservation Tax Credits, they clearly contribute to their communities’ sense of place and are worthy of restoration.

Examples of this project type include: 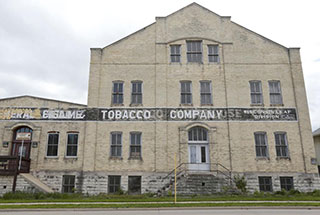 Edgerton received a CDI Grant of $489,000 toward the $2.1 million conversion of a historic tobacco warehouse into 28 apartments. While the community at one time had more than 55 such warehouses, fewer than 20 remain today. In addition to preserving a key piece of Edgerton’s tobacco farming heritage, the project assisted a current business tenant to relocate to and expand in the industrial park. It also created market-rate apartments, addressing a local housing shortage. The project benefited Edgerton by creating four new jobs and adding $214,000 in taxable property value. 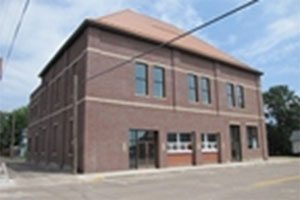 WEDC contributed $260,000 toward the $1.1 million conversion of a former City Hall and firehouse property in downtown Rice Lake into a multi-tenant commercial structure. The building served as a municipal hub for a century until 2001, when it became too small to accommodate a growing city workforce. It was vacant until 2012, when a plan to create a mixed-use commercial building was proposed. The project created $600,000 in additional property value and added more than 30 full-time employees. Initial tenants included a fitness center and multiple upper-floor office tenants.

Redeveloping the historic Retlaw Theater was a long-standing priority in Fond du Lac, and a $500,000 CDI Grant assisted the $2.3 million project, which retained the historic facade and created 10 market-rate apartments and office and retail space in a long-vacant downtown property. The 1925 theater was the only community’s only remaining historic downtown theater. It had been vacant for nearly a decade by the time this project restored some historic elements while converting interior spaces to uses needed by the community. The project renewed interest in adjacent properties, leading to restoration of the adjacent Retlaw Hotel several years later. 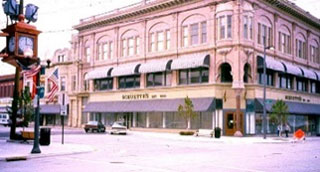 Renovation of the historic 1902 Schuette building was planned for more than a decade. With $250,000 in CDI assistance, the $4.5 million restoration of the historic department store moved forward, creating five first-floor retail and restaurant spaces and 17 upper-floor apartments with a rooftop patio. It added life to a prime downtown corner and allowed several downtown businesses to expand into modern commercial spaces. 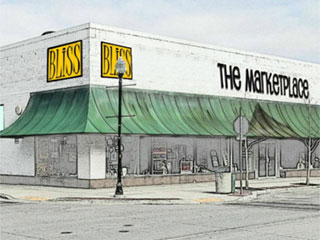 The City of Sturgeon Bay received $250,000 in CDI funds to aid renovation and rehabilitation of the former Younkers department store downtown. After the chain closed its locations in 2019, the property was acquired by a local retail business and renovated for expanded first-floor retail space for the shop, and retail space for other entrepreneurs. The basement and second-floor spaces were renovated to accommodate additional office and retail tenants. The project will also include public restrooms accessible from an exterior door, a long-identified need. Costs for the project’s first phase—first floor occupancy—exceeded $1.4 million.

Many downtowns struggle to bring new life to vacant lots. These gaps can be detrimental to pedestrian activity, require upkeep to address litter and weeds, and sometimes attract undesirable behavior. Infill development can be challenging, as such sites have constrained access and require careful planning to complete construction with minimal impact on adjacent businesses. Sometimes these spaces can accommodate adjacent businesses’ growth needs, providing the opportunity to expand operations or offer needed amenities, such as outdoor dining. In other cases, creative design work can transform these spaces into active commercial areas while adding upper-floor commercial spaces and/or residential units to further breathe life into an area.

Here are some projects that met the challenges:

After the Pioneer Ford dealership closed in 2012 at the gateway to downtown,  the city led efforts to acquire the five separate parcels, pursued a Brownfields Grant to remediate contamination on the site, and ultimately released an RFP for redevelopment. The winning proposal resulted in a 2018 development adding a 71-unit mixed-income apartment development on a two-acre site. The project also repurposed the original historic dealership building, creating community space for residents. It also integrated an additional retail storefront leased by Southwest Technical College to accommodate local training needs. The $15 million project received $250,000 in CDI Grant funding and resulted in an additional $3.7 million in taxable property value. 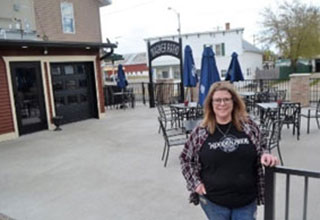 A $110,000 CDI Grant propelled renovation and expansion of the Wooden Shoe Bar & Grill, a destination business in downtown Lena. The renovation will remodel and expand the kitchen to allow the restaurant to add catering capabilities. It will also transform an adjacent vacant grocery store site into event space with seating for 70 guests and an outdoor patio. The project helped the business accommodate daily customer demand and provide catering services to area businesses seeking quality food options. The total project cost was $376,000. 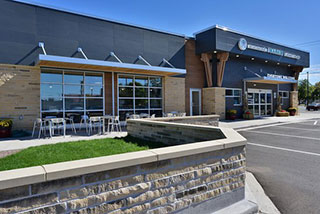 The Menomonie Food Co-Op had consistently gained market share and was looking to expand by building a new store on the edge of downtown Menomonie. The new facility is seven times its previous size, features outdoor space, and is strategically located adjacent to the new farmers market gantry pavilion—factors that helped attract customers to conveniently shop both the market and the co-op. The project received $500,000 in CDI funds and $386,000 in additional local assistance to allow the $4 million project to advance. 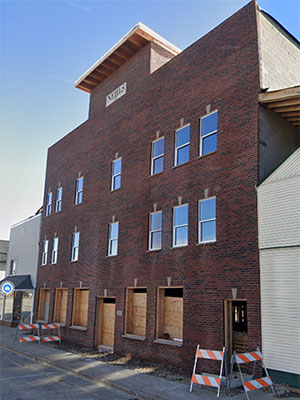 A 2021 infill development on the site of a 2009 fire resulted in construction of a three-story building including first-floor commercial space, an accessible residential unit in the rear of the building and 10 upper-floor apartments. An existing downtown business relocated and expanded with the addition of the new retail space. The $1.1 million project was supported by $250,000 CDI Grant.

Whether through previous planning efforts or input from residents and businesses, communities often have a list of businesses or amenities needed to fill gaps in the local market. These gaps might include critical commercial infrastructure such as hotels, full-service restaurants or child care. They may also include civic or cultural amenities such as outdoor gathering spaces, museums, event venues or developments at key locations which create a unique sense of place. CDI Grants can be a great tool to help these catalytic projects become reality.

Here are some success stories: 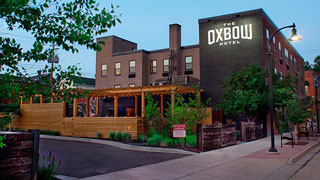 WEDC contributed $500,000 toward the $4.1 million renovation of a blighted hotel into a boutique hotel and music venue. The project added 30 much-needed upscale hotel rooms in a growing downtown as well as adding a full-service restaurant and live music to enhance downtown nightlife. The project created 20 full-time jobs and generated $1.7 million in additional local tax base. The city and the Regional Business Fund contributed a combined $310,000 to support the project, and numerous local investors provided additional financing to make the project possible.

The City of Prairie du Chien received a $250,000 CDI Grant to boost development of a 57-room downtown hotel. The $3 million project was more than 15 years in the making, requiring Department of Natural Resources approval, remediation of contaminated soils, and extensive engineering to address floodplain and stormwater issues. Ultimately, it created much-needed tourism lodging and event space downtown. It also filled a key gap connecting downtown with the riverfront, encouraging visitors to linger and explore. The city contributed one of the parcels toward the project, which generated an additional $2 million in assessed value.

The City of Ashland received a $155,400 CDI Grant to assist in renovating a vacant building into the EverGrow Learning Center, creating 100 additional child care spaces. The shortage of day care was identified by many community leaders as a deterrent for job and business growth. Numerous community partners also helped make the project a reality, including $100,000 from Memorial Medical Center, $37,000 from the Ashland County Community Foundation and $42,000 in other private donations. The project previously received a WEDC Capacity Building grant during the planning phase to select an appropriate site and operating structure to ensure success. 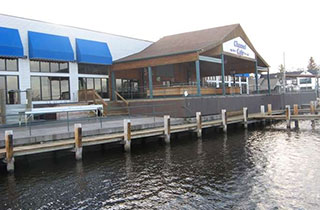 When a former waterfront restaurant was put up for auction, a coalition of local stakeholders created the Friends of Fremont group, buying the property to pursue development on a key site. More than $300,000 was raised from 20 local community members who purchased ownership shares in the company, and the village and chamber of commerce also contributed to the project. The resulting project created an event space, retail storefront and public facilities for boaters at the marina while retaining dock space. The $1.4 million project received a $155,000 CDI grant. 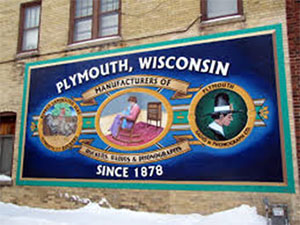 The City of Plymouth received a $100,000 CDI Grant to help create the Dairy Heritage Center downtown. The city purchased the historic property out of foreclosure and approached partners to create the center as an anchor for a growing tourism economy. The project, led by the nonprofit arm of the Sheboygan County Economic Development Corporation, will include a display area with interactive exhibits, a first-floor Cheese Shop and upper-floor apartments. The $1.5 million project received $100,000 in local funds and displays and content development were supported by several area cheese producers. 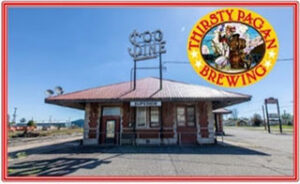 Superior received a $148,000 CDI Grant for the $500,000 renovation of its historic train depot into the Thirsty Pagan Brewpub, which will relocate into the space, expanding its growing operations. The project included full mechanical replacement within the building, addition of a commercial kitchen and creation of a stage with sound equipment and adjacent meeting space. The brewery anticipated business growth of more than 20% because of the project. The city contributed $67,000 toward the project. The lighted sign on the roof is on loan from the Lake Superior Railroad Museum.

That’s an inspiring sampling of projects, blending the creativity of government, entrepreneurs and communities. If these examples have sparked your interest in pursuing a project, there are several steps you can take to set yourself up for success in landing CDI funding.

Here are some tips: