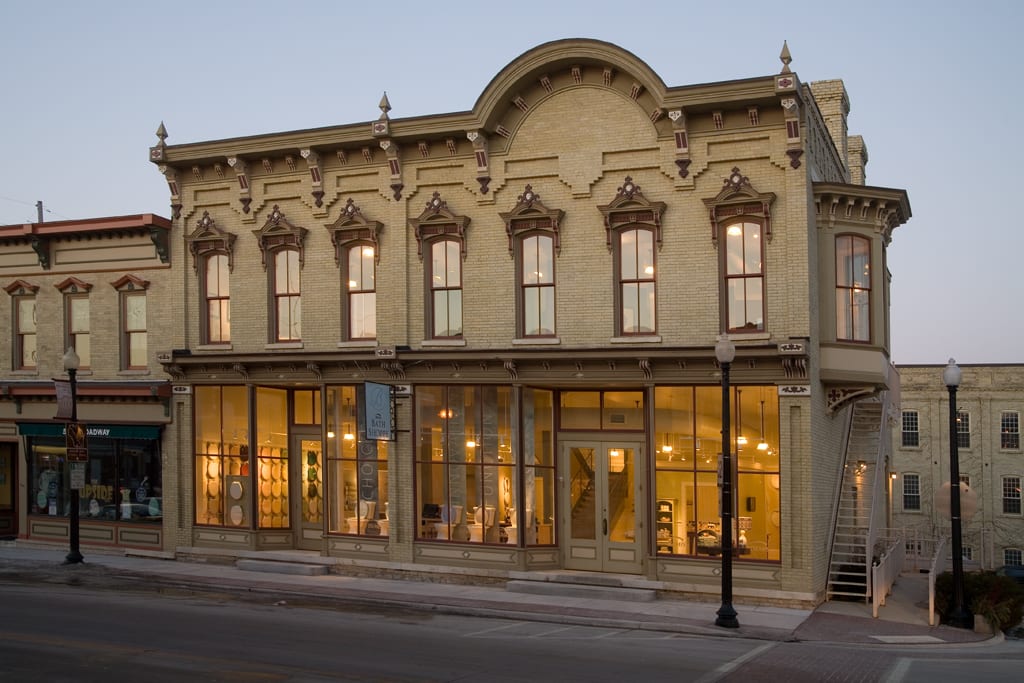 Wisconsin is blessed with historic buildings, districts and communities. Many communities have embraced this history and made a concerted effort to preserve these irreplaceable treasures, resulting in beautiful historic commercial districts and residential neighborhoods.

These traits alone can draw people from far and wide. Combine those attributes with vibrant businesses and activities, and the result is a terrific place to spend a day. While some communities may have been around longer, or some are larger, these three have excelled at preserving their history while keeping their downtowns active and inviting for modern-day visitors: 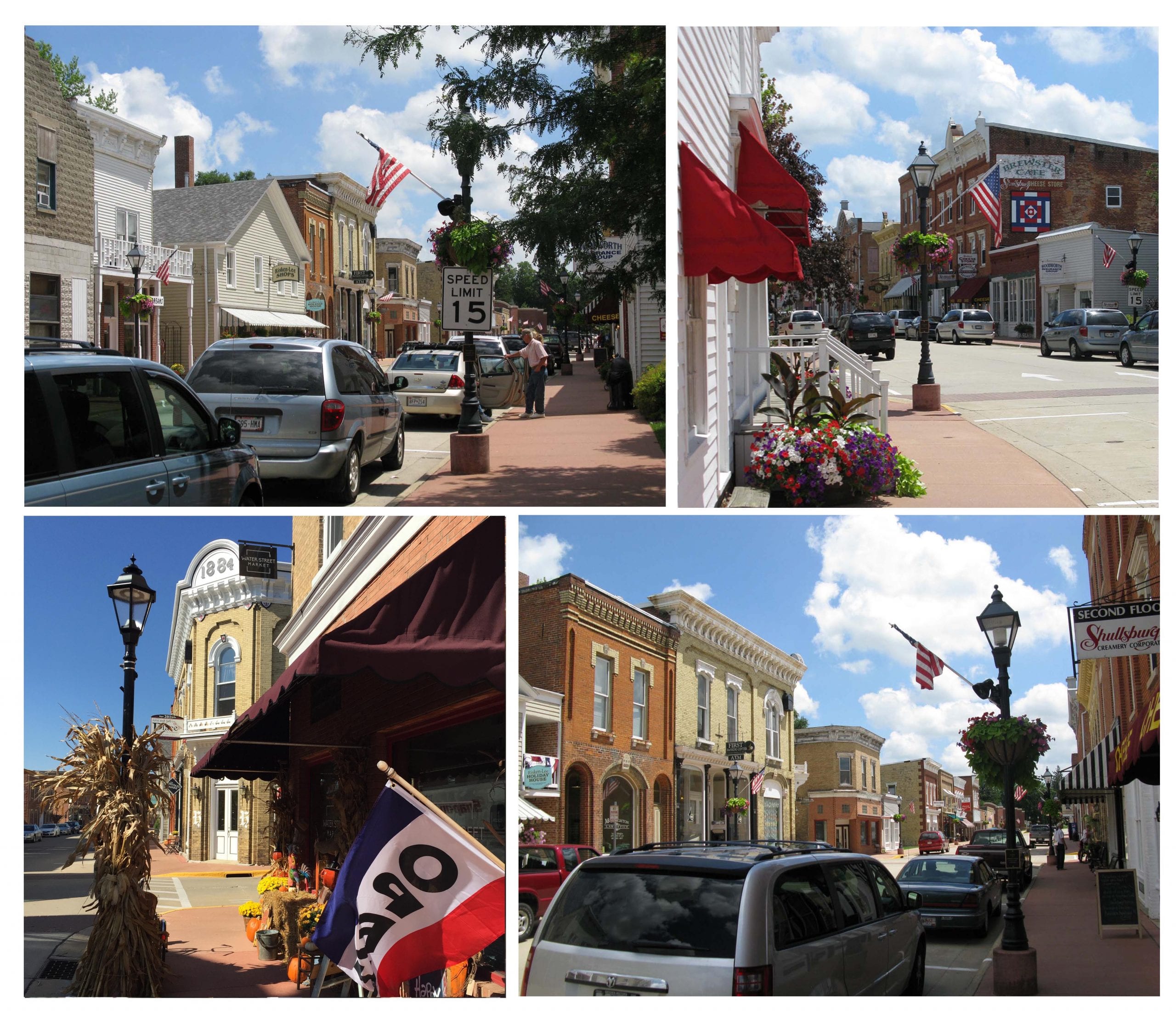 Located in the southwestern part of the state, Shullsburg is the third-oldest community in Wisconsin behind Green Bay and Prairie du Chien. But Shullsburg has arguably maintained its historic character better than those or many other, older cities in the Midwest.

Its first inhabitants arrived in 1818, but the population boomed in 1827 with the discovery of lead in the area. In fact, the Badger State got its nickname because of the miners here, who were called badgers because they lived in caves in the hillsides.

Beneath Shullsburg lie five miles of tunnels, and the last lead mine closed in 1980. Visitors can see and learn more at the Badger Mine & Museum located at Badger Park.

The park itself was created in the 1930s as part of the Works Progress Administration and includes the entrance to the Badger Mine, historic pavilions, a bathhouse and pool. Geocache treasure hunts are also a popular activity in the park.

Shullsburg has hundreds of 1800s buildings built of local brick and stone, in styles that range from Italianate, Greek Revival and Romanesque to historic miners’ cottages.

Any historic sightseeing tour should start downtown at the Shullsburg Visitor Center at 204 W. Water St. where visitors can view photos and videos about the village. You can also grab a historic walking tour brochure of the Historic Water Street District, where you’ll walk the quaint curved street past dozens of well-preserved historic storefronts.

Beyond the downtown, you’ll walk on streets named after Peace, Charity, Friendship, Justice, Virtue and other ethical pillars, which were named by Rev. Samuel Mazzuchelli who built St. Matthews Church, 344 N. Judgement St., in 1835.

Just outside the village are two distinctive sites.

The first is the Berry Tavern at 21527 Sedgewick Lane. The original building was erected in 1829 as a schoolhouse, polling place, post office and government meeting house. The current structure was built in 1840 when the stagecoach came through, and served as a hotel, stable, tavern, and dance and dining hall. The other unique site is Gravity Hill, on Highway U, just past Rennick Road. If you stop on a certain spot and put your car in neutral, your eyes will tell you that the hill slopes the opposite way than it actually does, and you’ll start to roll the other way.

When you’re done exploring Shullsburg’s history, head back to Water Street for shopping, dining and lodging.

You can choose from a full menu at the Burg, then stop for cheese and sausage at the Shullsburg Creamery Store, before getting an ice cream cone and vintage goods at Kinsley Crossing.

If a small-town diner is more your thing, try Water Street Market & Café, and taste their amazing vanilla shake. And for breakfast, you can choose from Water Street Place, or Second Chance Coffee & Music. If you didn’t find all the gifts or goods you need at Kingsley Crossing, try shopping for women’s clothing at J.A.C.E., or floral and gifts at Ila Rose.

Then call it a night at Copeland Guest House, or Water Street Place Historic Inn. There are also other one-of-a-kind and historic rooms available for lodging downtown. Visit the Shullsburg website for more information. 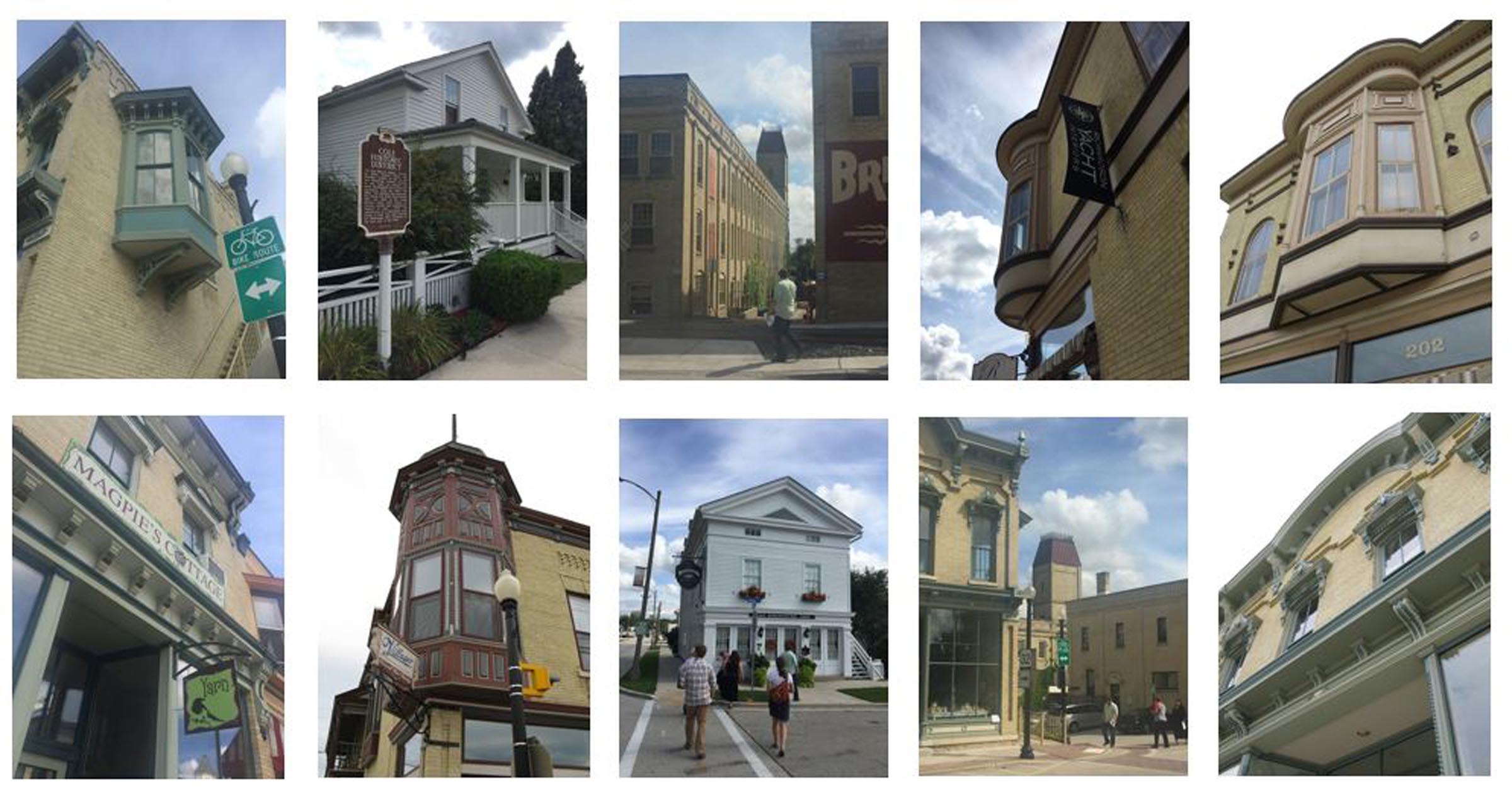 Located in east-central Wisconsin, Sheboygan Falls is one of the best-preserved small towns in the Midwest. It is home to two historic commercial districts, and its location along the Sheboygan River creates a stunning setting.

Much of the building restoration began in the early 1990s, and it gained national recognition in 1995 when it became one of the first Great American Main Street Award winners.

But it all began in 1835 when Massachusetts pioneer Silas Steadman formed the town of Rochester here and built a sawmill at the falls. By 1849, the town grew to have three sawmills, a tannery, two flour mills and an iron foundry. In 1850, it was aptly renamed Sheboygan Falls.

In the 1830s and 1840s, what is now the Cole Historic District, bounded by Water, Monroe, Adams and Michigan streets, was developed with several Greek Revival buildings that still stand today. These include the Mill House (1837), two Cole Brothers houses (1842 and 1846), the Rochester Inn (1846) and a general store (1848), each of which have been meticulously restored. The Rochester Inn still serves as a hotel today, and the Mill House is a former lumberyard boarding house that now serves as the Sheboygan County Historic Research Center.

Across the river is the Downtown Historic District, filled with block after block of 19th century Cream City brick, industrial and commercial buildings.

Some of the landmarks include: the Brickner Woolen Mill at 639 Monroe St., converted to apartments in the 1990s and sitting stately over the falls; The Smith Building, 514 Broadway, which houses the Bemis Bath Shoppe, and for decades was the building used in the Wisconsin Main Street logo; the 1878 Block – the 500 block of Broadway – with its multiple storefronts in one stunning block of buildings; and Richardson’s Furniture, with its curved turret and decorative bay windows. And, there are dozens of equally impressive buildings between each of these landmarks.

In addition to its historic assets, Sheboygan Falls is blessed with many natural and recreational treasures. There are four riverfront parks and a riverwalk downtown. The city is located just off the Old Plank Road and is on the Wisconsin Ethnic Settlement Trail. It also boasts a Jack Nicklaus–designed golf course (the Bull at Pinehurst Farms) and is within a few miles of the world-renowned courses of Blackwolf Run and Whistling Straits.

When it comes to dining and shopping, Sheboygan Falls has a host of options.

No visit here is complete without a stop at Bemis Bath Shoppe, where you can buy anything from bath soaps to designer toilet seats. At Evan’s, there’s a good chance you’ll find anything you could possibly need, from clothes to kids’ toys to candles and more. For yarn and fabric, Magpie’s Cottage, has it all, as does Rick’s House of Flowers, for floral and gifts. For children’s clothes, check out Mama Bear & Co., and for shoes of all kinds, visit the Depke Shoe Store. No visit to a historic district is complete with an antique store, and Uncle Ira’s Attic Antique Store, has you covered.

You’ll need a break from shopping to eat and drink.

Falls Firehouse Pizza, is located in a former firehouse and school building with a ton of charm. Bread & Bean Eatery, is a great place for upscale but casual lunch or dinner. For relaxing drinks in a historic atmosphere, try the Osthelder Saloon, in the 1878 Block. If you’re in a hurry and want a sandwich or panini, try Junior’s Eats. For a quick snack, Broadway Popcorn Co., is a good bet.

For more information about Sheboygan Falls, go to https://sheboyganfalls.org/ or stop in at the Chamber Main Street office at 504 Broadway in the heart of downtown. 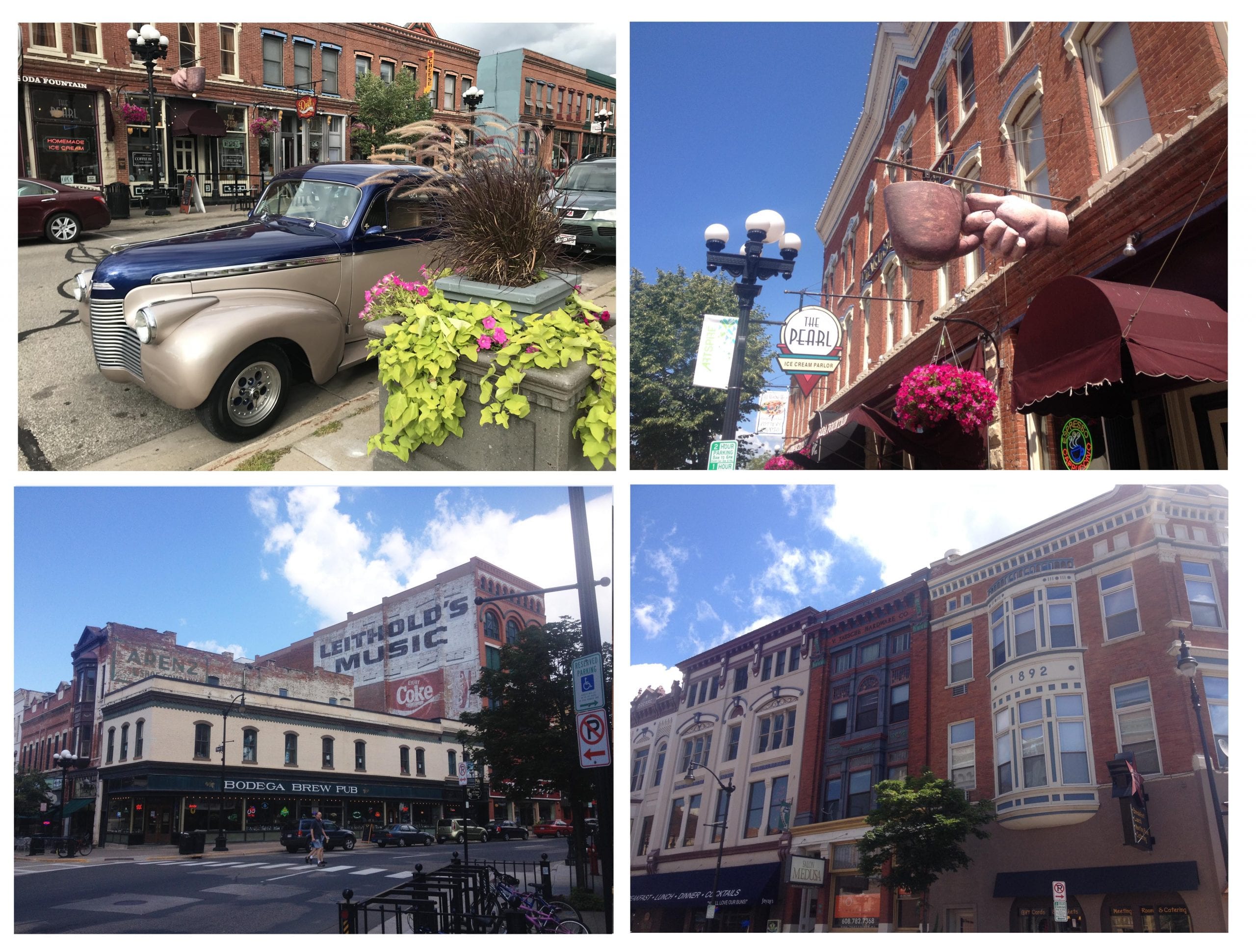 As a regional hub and vibrant college town in the bluffs and valleys along the Mississippi River, La Crosse has an array of attractions, including water, recreation, paddleboats, eagles, art, music, museums, shopping, dining, festivals, colleges, universities and a remarkably well-preserved historic downtown.

The Commercial Historic District alone has 110 buildings ranging from Italianate to Romanesque Revival and Queen Anne. The renovation of many of these buildings, along with the adaptive reuse of others, was a big reason La Crosse was selected as a Great American Main Street Award winner in 2002.

And things have gotten even better since, with projects ranging from warehouses and factories being converted to award-winning hotels and apartments, a riverfront redevelopment, new mixed-use and corporate office developments, a new performing arts center and arts district, and more. But it has not lost its historic river-town charm nor its college-town vibe.

To explore La Crosse’s history, there is an impressive array of walking tours available, ranging from historic architecture to beer, immigration, race, ethnicity and even ghosts. They can be found at Footsteps of La Crosse.

When it comes to shopping, La Crosse has it all, featuring more than 80 retail shops selling everything from antiques to music. Some of note include: Pearl Street Books, Deaf Ear Records, Leithold Music, Smith’s Bike Shop (since 1895), Drift Mercantile, the three-story Antique Center of La Crosse, Pump House Regional Art Gallery, Satori Arts (owner John Satori was featured on the TV series “American Pickers”), and even a flagship Duluth Trading Company store.

For entertainment, there are shows at the performing arts center and the convention center, but also smaller local and touring acts at The Warehouse, one of America’s oldest all-ages music venues, and Root Note arts and music cafe.

There are also plenty of restaurants downtown, including Piggy’s, a La Crosse landmark; Bodega Brew Pub, which has stood at the heart of downtown for generations; Buzzard Billy’s, with its New Orleans cuisine on the ground floor and the authentic 1950s vibe of the Starlite Lounge on the second floor; the Charmant Hotel, with exquisite dining inside as well as pizza and appetizers on the rooftop patio; local favorite Fayze’s, with extensive menus for breakfast, lunch and dinner; Dublin Square has authentic Irish food and drink with ample outdoor seating. For tapas, try 4 Sisters; La Margaritas has a fine Mexican menu; Le Chateau is the place to go for French cuisine located in a historic home; and for upscale supper club dining, Lovechild is the place.

If you just need a jolt or a snack, there are plenty of options, including the Pearl Ice Cream Parlor (which also features a confectionary and coffeehouse), Jule’s Coffeehouse, Cabin Coffee, and Finnottes Nut & Chocolate Shop.

Before calling it a night, try a La Crosse Queen riverboat cruise. There are several to choose from, including sightseeing, dinner, lunch, brunch and even pizza cruises. You’ll need to book in advance here.

When you’re done exploring, there are dozens of lodging options in downtown, including the Charmant Hotel, located in a former factory; the downtown Holiday Inn; the Bentley-Wheeler Bed & Breakfast; and the Cargill-Pettibone House.